The Effects of Buddhism on Southeast Asian Culture

A large black wicker Buddha at an outdoor pavilion in Myanmar, the only one of this type I’ve ever encountered. Photo: Henry Lewis

I don’t remember making a conscious decision to immerse myself in the study of Buddhism, but by 2005 when I arrived in Thailand to teach I already understood (at least on an intellectual level) many of its basic tenants. I’d read books by Tibet’s Dalai Lama, Vietnam’s Thich Nhat Hanh and a variety of other popular Asian Buddhist writers. I found their suggestions on how to achieve freedom from the human ‘monkey mind’ with the aim of eventually attaining a higher state of consciousness to be very appealing.

I’d also regularly attended a Buddhist sangha back in Seattle during the early 1990s where I’d developed a meditation practice and learned more about the rituals and practices which had been repackaged for Western consumption. What lay in front of me, however, was a series of lessons on the different interpretations and manifestations of Buddhism found from one country and culture in East Asia to another. 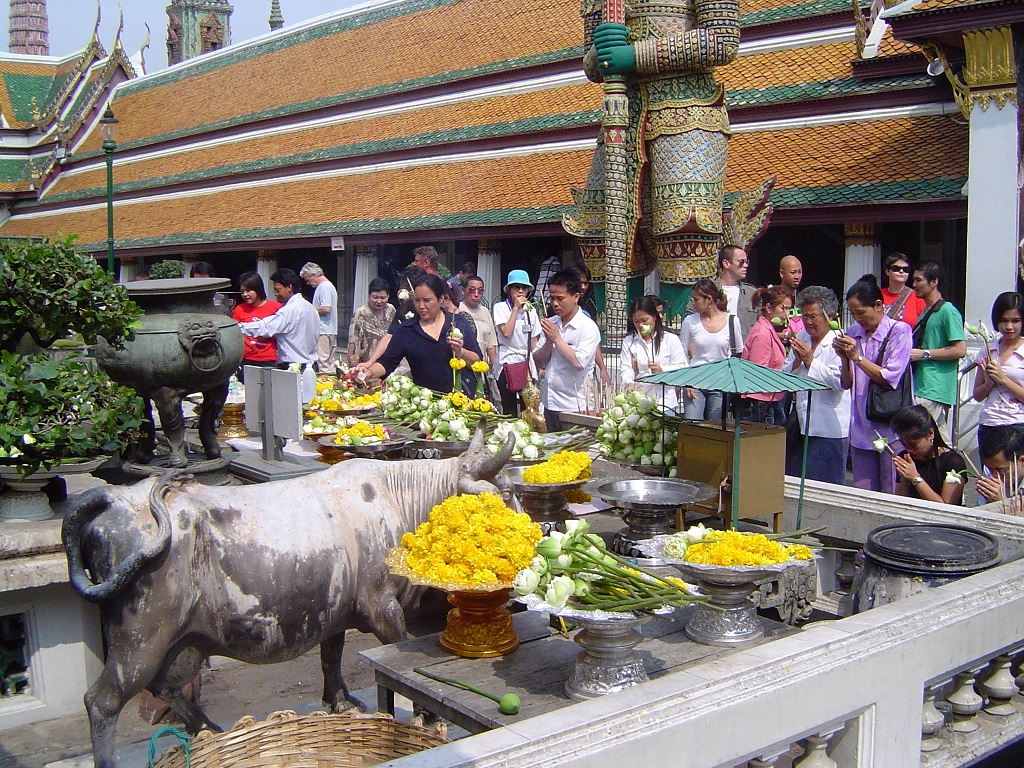 Thais making merit through symbolic offerings at Wat Po in Bangkok. Note, the cow sculpture which is more often seen in Hindu iconography. The syncretic nature of religion means that when a faith enters a new region, it usually blends with the folk belief system that was already in place before its arrival. Photo: Henry Lewis

Rituals in the Big Mango

The three years I spent teaching in Bangkok were filled with many unique experiences, but the one that absolutely astounded me–and made me the most uneasy–was the celebration of ‘teacher’s day’ at the small college where I was teaching.

The classroom had been carefully prepared, with great attention paid to each detail. The students had removed all the desks and placed five large (plush and luxuriously adorned) wing-back style chairs along one wall and there were large bouquets of fragrant flowers adorning various spots around the room.

When I was led into this redecorated space, I was quite astonished by the setup–not to mention the aesthetically pleasing transformation–that had taken place in what was once a drab classroom. As the only native-speaking teacher in the college’s small English department, I had only been told that it was ‘teacher’s day’ and the students had planned a special celebration for us.

Never being one to fly by the seat of my pants (at least not back in those days), I was both excited and more than a bit apprehensive about what was to come. I had been in Thailand for less than two months so I was still in my ‘I want to relax like all the locals, but it isn’t easy’ mode, especially in an unknown situation surrounded by colleagues I barely knew. 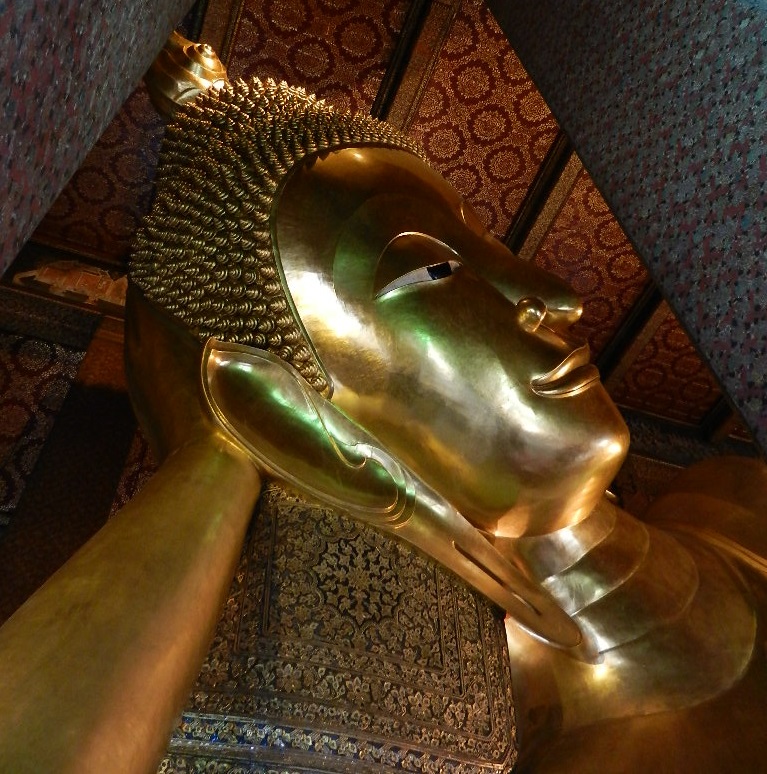 The head of the one of the world’s longest reclining Buddhas at Wat Po in Bangkok. Photo: Henry Lewis

Each teacher was shown to a specific chair and carefully seated as though we were royalty. As the department’s foreign English mascot, I was placed in the center chair right beside the Head of Department. First, we were all given delicious freshly-squeezed juice to drink.

As we settled into our thrones, I watched the reactions of the teachers on either side of me as the students disappeared into the hallway. They had expectations about what would be happening next, but for me this was completely new territory. I thought perhaps the students might reappear in traditional costumes and sing or tell Thai fables while practicing their English. I could never have guessed what would happen next.

After a few moments of silence, the students reappeared just outside the classroom door, but this time they were all on their knees and moving in a side to side shuffle as they reentered the room. In unison, they faced us and bowed, performing a full prostration touching their heads and hands on the floor. Being someone who was raised with a large dose of egalitarianism, this made me exceedingly uncomfortable.

I had seen locals doing prostrations while praying to images in Buddhist temples during my time living in China as well as while traveling in Japan and Southeast Asia, and that reverence I understood. But in this context, it seemed odd to say the least.

The students held bundles of white strings in their hands—the white representing purity and enlightenment. One at a time they approached each teacher, moving laboriously across the open floor on their knees. In turn, each student tied a white string around every teacher’s right wrist, after which they would do their knee walk in reverse, never turning their backs on us. Needless to say, all the knee-shuffling and string-tying took a quite a bit of time to complete, and I found myself feeling overwhelmed by this act of generosity and deep respect.

I noted how genuinely each of my Thai colleagues enjoyed this reverent ceremony, one of whom had been a Buddhist monk before he began his teaching career. Still, having students bow to me and crawl around on their knees in order to honor my presence made me feel incredibly uncomfortable. 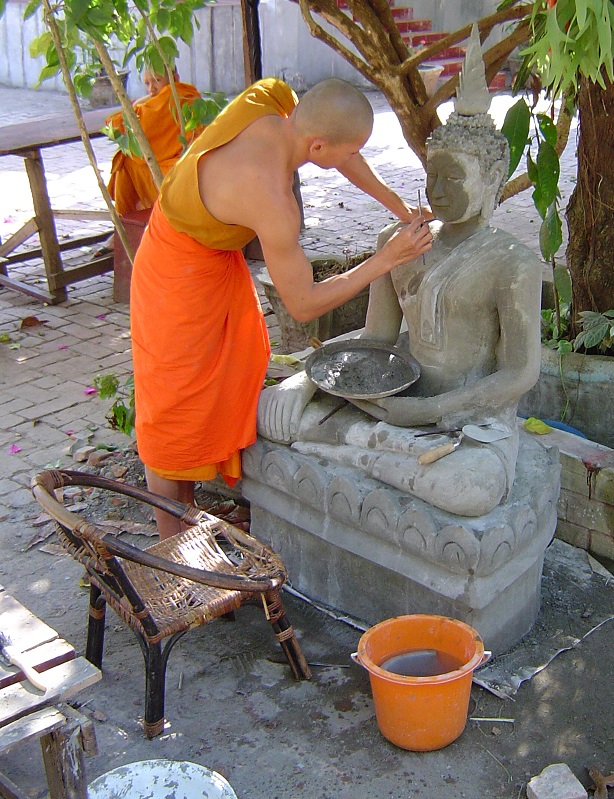 The rituals performed within a culture are often indicative of the values most cherished in that culture. While the teacher’s day ceremony I experienced in Bangkok was surely just as rooted in the historical spread of Chinese Confucianism—where respect for one’s elders and those in positions of authority are highly valued attributes—as it was in Buddhism, it nevertheless was representative of the respect I witnessed during most of my personal encounters within the country.

Buddhist teachings are the basis for many daily routines and are seen as being inseparable from family life or government policy (in theory). These teachings instruct practitioners to ‘make merit’, which involves performing a variety of acts of charity as often as possible. By doing this on a regular basis, it’s believed that an individual will be blessed with a more prosperous rebirth in the next life.

Much of the activity I observed inside and in the gardens surrounding Buddhist temple complexes revolved around this making of merit. Merit can be made by doing charitable acts for the poor, supporting a Buddhist temple and by giving alms (usually food) to monks who line up early each morning with their empty bowls into which local residents will place rice or other simple foods. 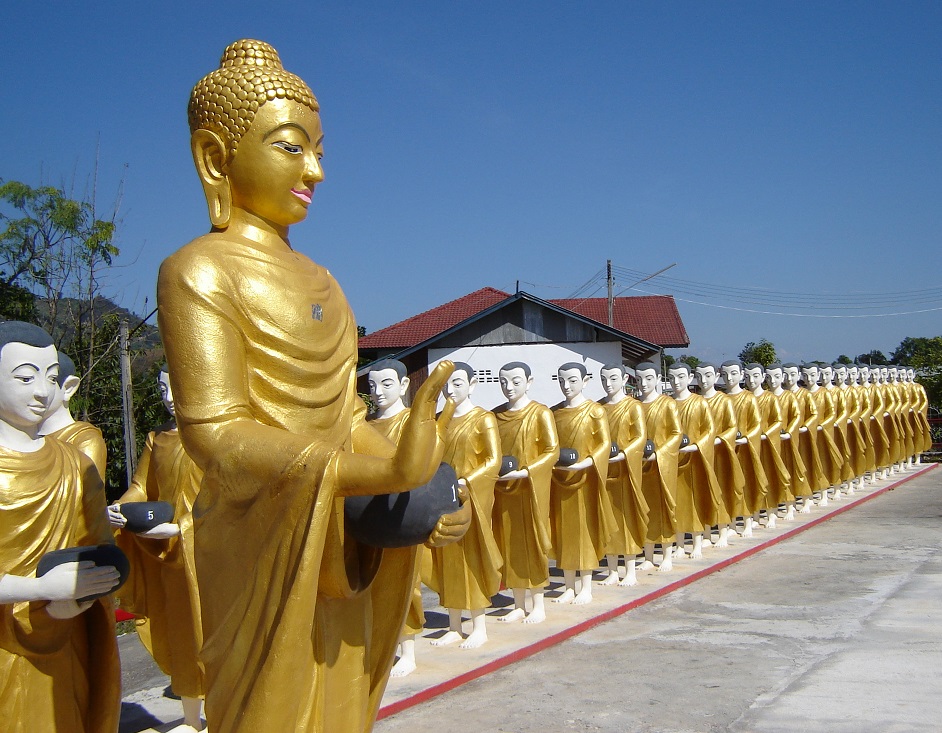 Sculptures of Buddha and his monk students as they make the rounds to collect alms, seen here at a temple in northeastern Myanmar. Photo: Henry Lewis

The spread of Buddhism took a circuitous route from its original founding in northern India and then extended it’s reach across the remainder of East Asia. Chinese Mahayana Buddhism was almost wiped out during Communist China’s Cultural Revolution to the point that it’s difficult to discern the details of the earliest practices there. Similarly, Japanese Buddhism follows several differing schools of thought, but all were colored by the merging of Buddhism with the country’s ancient Shinto beliefs.Tibetan Buddhism blends imagery and practices from Hinduism in nearby Nepal and India with its hungry ghost and demon iconography.

According to those who have far more expertise on the subject than I, Southeast Asian Buddhism is closer in form to the original practices taught by the historical Buddha in northern India. The purist lineage is said to be found in the interior of the island nation of Sri Lanka where Buddhism first spread from India before almost disappearing in its country of origin.

Exterior of the Dambulla Buddhist cave complex located in the mountainous interior of the island nation of Sri Lanka. Photo: Henry Lewis 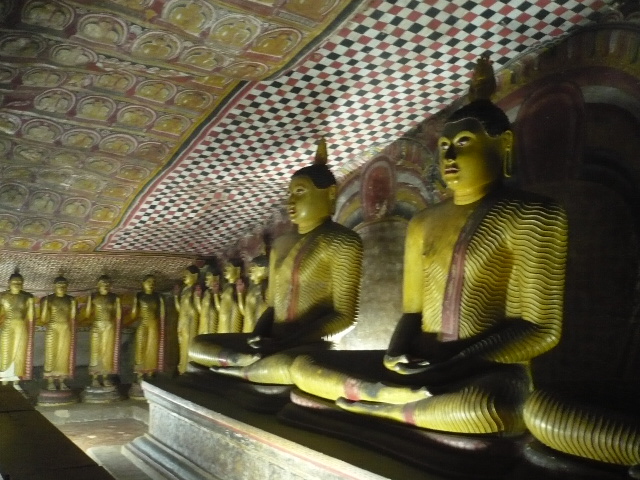 Detail inside one of the caves at the Dambulla complex where a huge variety of Buddhist sculptures and frescoes can be found. Photo: Henry Lewis

What all these different forms of Buddhism have in common are the rich and complex systems of iconography and the most basic Buddhist teachings that all things are temporary and interconnected and the guidance that one must perform acts of kindness in this lifetime in order to be reborn into a better life in the future.

For a brief comparison of how various world religions–including Buddhism–provide a stabilizing force and springboard to happiness and contentment for many, please follow this link to my post “The Pursuit of Happiness.” 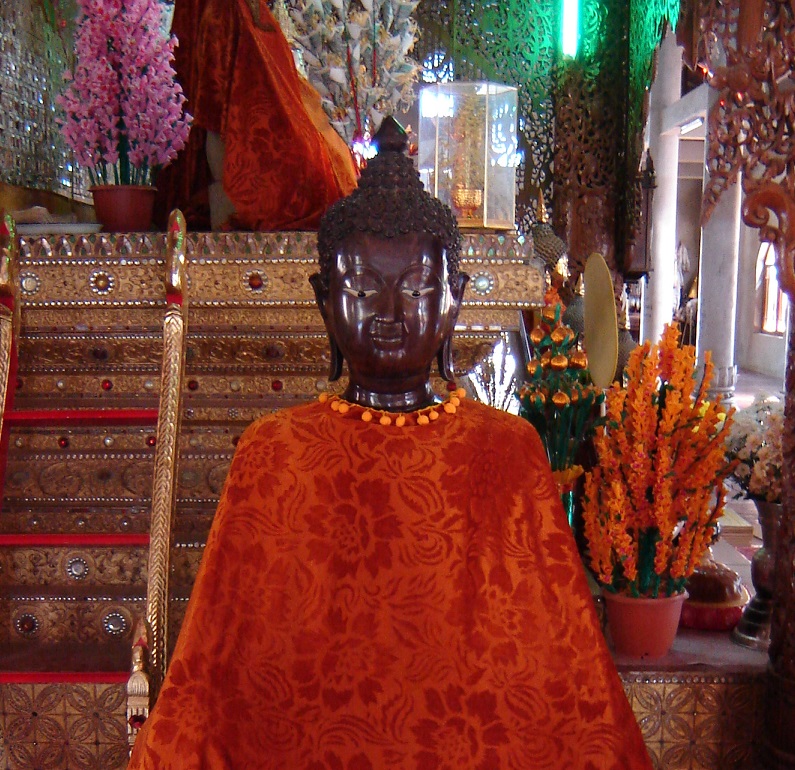 Buddha statues are sometimes wrapped in beautiful fabrics such as this one at a temple in northeastern Myanmar. Photo: Henry Lewis

Of course, this isn’t to say that everyone in Thailand or any other Southeast Asian culture (in general) always acts with respectful good intentions. Wars and dictatorial governments have all placed their imprints on the cultures of this region. In addition, many Westerners think of the ‘sex industry’ as being synonymous with Southeast Asia, and especially Thailand, but this is only a small sector of the region’s vast tourism industry—and one that was largely created by US forces who came to Thailand for R&R during the years of the American War in Vietnam.

The biggest stain by far on Southeast Asian Buddhist culture has been the human genocide perpetrated by the Buddhist regime in Myanmar against the Muslim Rohingya communities in the west of that country. The horrors committed there are an example of extreme religious intolerance and further illustrate the fact that there are good and bad people in every culture and country on our diverse planet.

However, a gentle manner and respect for others is the expectation and traditionally, the norm to which one should aspire in all Southeast Asian cultures.

I always smile when I see one of these little monks which are often stationed just outside the entrance to temples in Thailand. The Thai idea of ‘sanook’ (fun) even applies to religious aspects of their culture. Photo: Henry Lewis