For a different take on recent American history–

I am not an American.

I was born in the continent known as “America”, yes. But somehow this United States has given itself the name of the entire continent.

Ronald Reagan demoted the rest of this magnificent continent to the mere “Backyard of America.”

That’s when I came here, to the “land of the free,” when Ronald Reagan sent billions of dollars to military dictators so they could use the money to rape, torture, and massacre my people. I didn’t want to come here. Oh, how I hated coming to this land so full of restrictions, prohibitions, and people kept so ignorant of their own history!

Once I came here, almost no one I met knew where my country was. They all assumed I was Mexican. Except for Mexicans. They knew where I was from, and knew they couldn’t trust me because if I was from where I was, I…

We are conditioned so effectively to play artificial roles that we mistake them for our true nature. Jean–Jacques

John, an expat who recently relocated to Colombia, approached the desk at the Medellín immigration office. “Cómo puedo ayudarte” (how can I help you), the lady behind the glass window at the reception counter asked?

John had no idea what she was saying, so he shook his head and said, “I want to apply for a visa. Does anyone here speak English?”

The lady at reception rolled her eyes and called over her supervisor who responded in English and looked over the information John had provided in the online application. “What is your nationality,” the supervisor asked?

“I’m American,” John replied in a matter of fact manner.

“We are Americans too Señor. What is your country of origin,” the supervisor insisted, knowing the answer but refusing to let John off the hook?

John was baffled by the supervisor’s response and clearly agitated at this point. He raised his voice–so much so that everyone in the waiting area looked in his direction–and said, “I’m from the USA which means I’m an AMERICAN!”

“I’m sorry,” the supervisor said as he pointed to the choices on the application form. “That is not a category we recognize here in Colombia. If you are from the USA, you must tick the ‘Estadounidense’ box.”

“What the hell is that,” John quipped, showing his confusion and frustration at what he perceived to be the astounding ignorance of the immigration official as well as the bureaucracy which employed him?

END_OF_DOCUMENT_TOKEN_TO_BE_REPLACED

Tampa, Florida, a city where Donald Trump has held some of his most infamous rallies, will receive disproportionately negative climate change impacts if scientists’ predictions hold true.

In a recent study published in the journal Science, “Estimating economic damage from climate change in the United States,” researchers have projected which states will likely be dealing with the most harmful effects of global warming and its associated negative impacts by the end of this century. These negative impacts include coastal flooding, storm damage, agricultural losses, curtailments in job creation and lower values in production of goods and services (GDP).

What makes this study different is that the researchers involved used county-level data to predict localized impacts. As the author’s noted, “Standard approaches to valuing climate damage describe average impacts for large regions (e.g., North America) or the entire globe as a whole. Yet examining county-level impacts reveals major redistributive impacts of climate change on some sectors that are not captured by regional or global averages.”

Indeed, looking at the charts presenting this more localized data in visual form is quite an eye-opening experience. They reveal just how unevenly distributed these negative impacts will be, with states in the South and Midwest bearing the brunt of the most serious economic impacts while states in the country’s Northeast and Northwest may actually receive benefits from atmospheric warming that lead to more vibrant economies.

Based on this map, it certainly looks like some of those jobs that moved to the Sunbelt States over the last 3 decades may be moving back north. It would be very interesting to see Canadian data added here. More jobs on the northern side of the US border ‘eh! Note: Red = economic damage. Dark Green = economic benefits.

END_OF_DOCUMENT_TOKEN_TO_BE_REPLACED 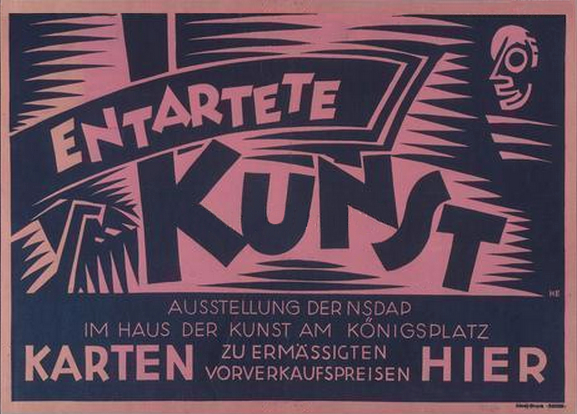 Traditionally artists have provided a mirror image of the societies in which they lived, often being at the forefront of social change and either propagating or protesting against the dominate political ideologies of a given period. Such was the case following the rise to power of the Nazi party (Third Reich) in pre-World War II Germany when artists both fought against and worked hand in hand with the German government to influence public opinion.

Adolph Hitler and other party leaders rejected ‘modernism’ in the arts and sought to create a world of art and literature that celebrated the purity and goodness of the German people and the soil on which they lived (Blood and Soil). While lifting up the idea of German purity, the Third Reich simultaneously aimed to show the ‘sickness’ of the modern art movements of Fauvism, Cubism, Dada, Surrealism, Symbolism, Post-impressionism and Germany’s own Expressionism. 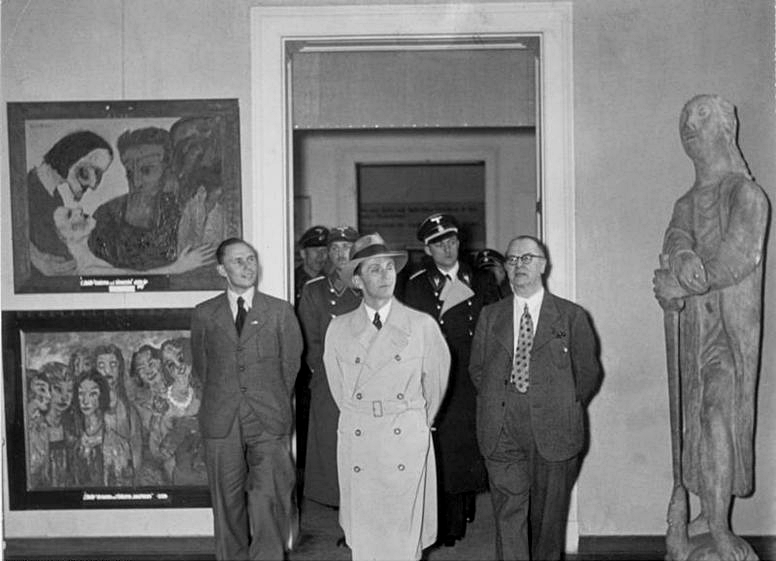 Joseph Goebbels, Third Reich Minister of Propaganda from 1933-1945, views the Degenerate Art exhibition in Munich in 1937. Goebbels was one of Adolph Hitler’s closest allies and sought the harshest possible punishments for Jews. He promoted and fully supported the annihilation of millions of Jews and other ‘undesirables’. Photo Credit: Wiki

END_OF_DOCUMENT_TOKEN_TO_BE_REPLACED

As the old saying goes, a picture is worth a thousand words. This is definitely the case when comparing the power and lasting memory of an illustration, cartoon or photo to the written word—an essay on a political or social topic. In much the same way that viewing a graph can more quickly and clearly describe the results of a survey when compared to reading a written abstract, an illustration or cartoon can convey its message more powerfully by using creative visual elements that are aimed at stirring the viewer’s emotions in a way that makes them almost palpable.

I was fortunate to stumble upon a public exhibition of illustrations by international artists last week that focused on social and political issues around the world. I’m sharing my favorites in this post.

[Apologies for not giving credit to some of the artists, but the exhibition didn’t identify the creators of each work–strange, I know! For the signed illustrations, I’ve tried to decipher the artist’s signature.]

This powerful illustration certainly fulfills its purpose of addressing the remnants of Colonialism that still negatively affect indigenous populations today, as well as the timely issue of responsible tourism. Artist: P. Kuczynski, 2009.

END_OF_DOCUMENT_TOKEN_TO_BE_REPLACED 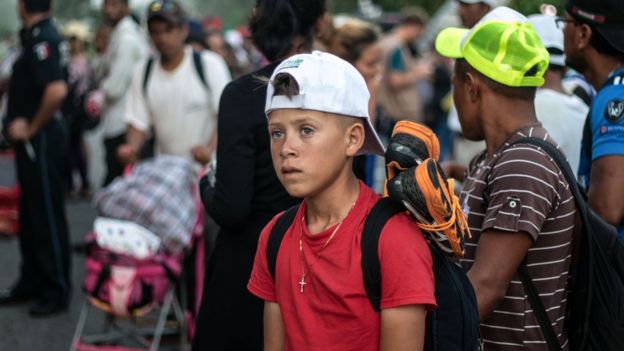 On this blog, I welcome dissenting opinions as well as all comments and insights from readers, but I do expect dissenting opinions to be supported by some sort of evidence even if it’s only anecdotal. This is what I always required of my students when they composed argumentative essays and it should be the same in a forum such as this.

This week I’m presenting a comment I received from a reader who responded to last week’s post “Dispelling Myths About Migrantion.”

Wow so much emotional appeal, so little facts.
Being poor and brown does not qualify people for citizenship in any country, especially not the US. Caravanning and causing a huge scene is not how you achieve asylum. These people are not hungry, half of them are fat, they are not fleeing, they are living in a culture of violence which is completely different.
What’s next, should America boat in all 100 million people from the Philippines just because their own failed nation is plagued with violence and low wages? Get fucked.
FINISH THE WALL, DEPORT & BAN ALL ILLEGALS. American citizens (including the legal immigrants) do not want to pay for these people to move in and take up space and jobs especially while the country is already overpopulated (with low wage workers at that).
Democrat policies ruined America for decades and we’re tired of it, no more, the gig is up for “diversity” pushing leftists.

What isn’t clear is whether the writer was seriously expressing a personal opinion or just trying to get a reaction from me. Either way, here goes. Note the commentator’s words are all in brackets.

END_OF_DOCUMENT_TOKEN_TO_BE_REPLACED

With thousands of migrants from Central America currently stranded just south of the US border in Mexico, it’s time to ignore the political rhetoric coming from Washington for a few minutes and focus on the reasons so many choose to leave country, culture and family behind and walk 2,500 miles (4,000 kms) to an unknown future.

It’s difficult for privileged Americans–as well as most other Westerners–to feel empathy for the lives these people are leaving behind. But make no mistake about it, the actions of Western governments–through flawed foreign policy decisions–have contributed to the mass migrations we’ve all witnessed over the past decade.

“Refugees are entitled and ungrateful.” 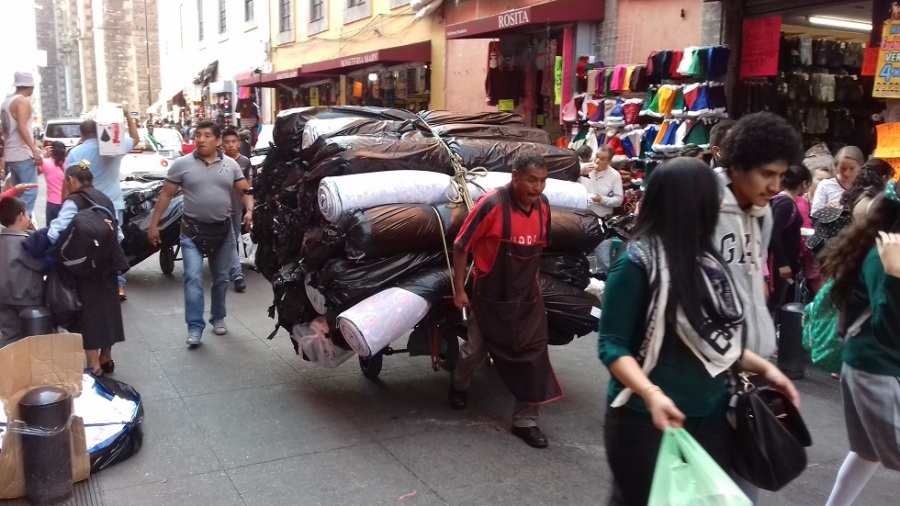 A laborer struggles to pull a wooden cart loaded with rolls of fabric through the garment district in Mexico City. Photo Credit: Henry Lewis

END_OF_DOCUMENT_TOKEN_TO_BE_REPLACED

The British pop rock group The 1975 have created a powerful music video, Love It If We Made It, with the refrain: “Modernity has failed us”

Polarizing the people is the authoritarian’s ultimate weapon. When this happens, the people’s power will be taken away.

From: Rap Against Dictatorship in Thailand

I was living in Bangkok during the 2006 coup d’état. While the military take over was peaceful at the time, deadly violence later erupted as anger boiled over in the population which had become polarized into two opposing groups–the red shirts and the yellow shirts. Needless to say, this made it easier to identify those at large rallies who held similar views.

I was excited to find this video since it’s a sign that some Thai artists are taking a stand against a dictatorship which has instituted draconian laws removing their right to speak out against corruption and injustice.

I wish only peace, security and freedom for my former Thai students. 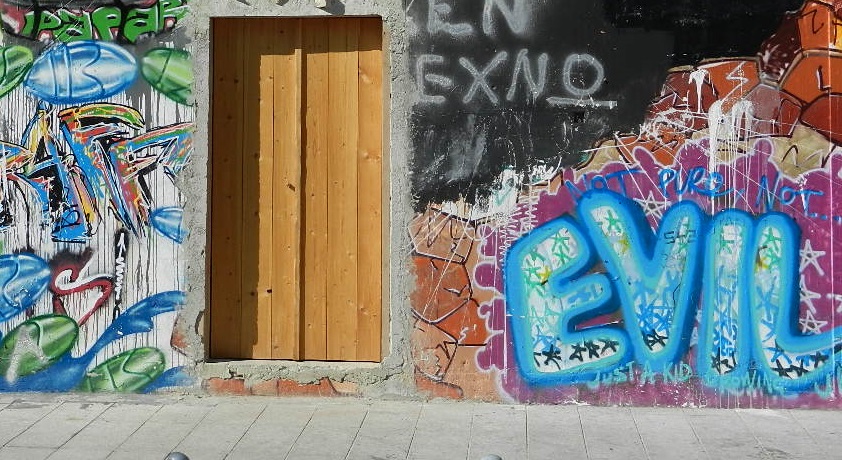 “Fear again. If you want to control someone, all you have to do is to make them feel afraid.” Paul Coelho, The Devil and Miss Prym

George Soros–the most evil man on this planet. Really, I wondered aloud as I read a post from an anti-Soros Facebook group? Over the past few years, as more repressive, right-wing governments have gained popularity in some Western democracies, Soros has become THE go-to bogeyman.

While I don’t personally know the wealthy philanthropist, I seriously doubt he’s responsible for all the global mischief he’s been (and is still being) accused of causing by right-wing media outlets and conspiracy theorists. The list of accusations includes but is certainly not limited to: the Arab Spring uprising in the Middle East, refugee invasion of Europe, Black Lives Matter Movement, Ukrainian Revolution and most recently the much-publicized ‘migrant caravan’ heading toward the US/Mexico border. Soros has been labeled the king of the Institutional Left by far-right Brietbart News and was accused by Donald Trump of paying women to protest during the Senate hearings on Brett Kavanaugh’s appointment to the US Supreme Court. 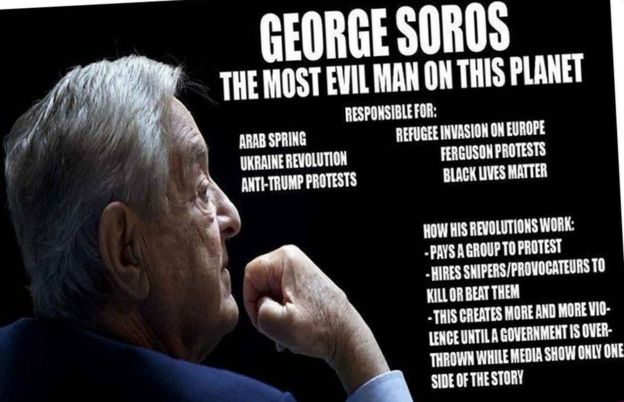