Attitude Adjustments and Other Lessons From Mandatory Isolation

Time and reflection change the sight little by little ’till we come to understand.
-Paul Cezanne

My phone notifies me that I have another whatsapp message. I hesitate, wondering if it’s news from an old friend abroad or from my local contact who’s keeping me updated on steps the Colombian government is taking to fight the rapid spread of the new coronavirus here in my adopted country of Colombia.

Over the past two months, many of us have had the good fortune of watching from a safe distance as lives were turned upside down in other parts of the world. That’s no longer the case, as COVID-19 has continued to spread rapidly, with confirmed cases now being reported in 185 countries, areas or territories according to the WHO.

The initial incompetent reactions – or lack of action – from top leaders in the USA, the UK and here in Colombia have caused conflicts and chaos which in turn have slowed any positive steps toward controlling the outbreak before it began spreading from person to person within local communities. Despite earlier warnings from both the military, intelligence community and international medical professionals, many national governments have shown themselves to be unprepared and unwilling to listen to voices of reason coming from regional and local officials aware of the real-time changes taking place on the ground.

In my local region of Antioquia, last night marked our first mandatory 3-day lock-down, a test to identify the service gaps prior to a longer period of quarantine. After taking action on their own, local and regional leaders are now finding Colombia’s national government more conducive to cooperating with local authorities. Although the confirmed case numbers here remain much lower than in the USA or Western Europe, medical experts are demanding action – now.

Fearing that even a mild epidemic could cause the country’s underfunded healthcare system to collapse, the national government has finally heeded the call of health experts and local leaders, calling for a nation-wide lock-down from March 25 to April 12. Colombia’s borders are now closed and all international flights into and out of the country will cease operations on March 25.

Unfortunately, these actions have come too late as infections are no longer limited to international travelers and have begun to spread within communities. The situation on the ground seems to be changing at lightening speed and we can no longer fool ourselves with the belief that the wolf will remain on someone else’s doorstep. 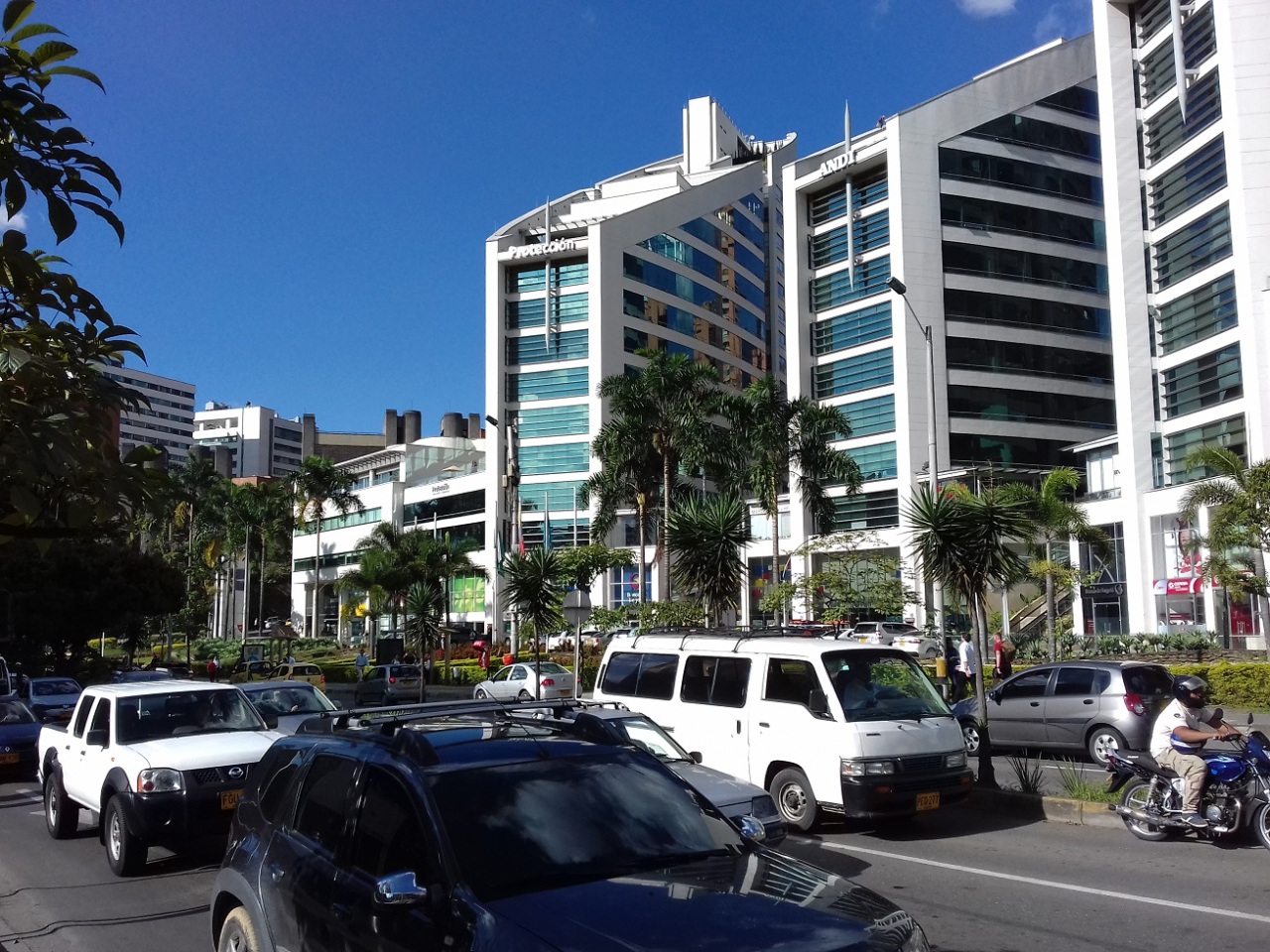 Colombia’s second largest city, Medellín, has some of South America’s best hospitals. Still, the government fears the country’s healthcare system could collapse under the stress of even a mild COVID-19 outbreak. Photo: Henry Lewis

I read yesterday that a US State Department spokesperson announced that it can no longer be responsible for getting Americans abroad back ‘home’ during the pandemic. The notice went on to say that Americans who staff many embassies and consulates abroad had already been flown back to the USA, yet there’s nothing to indicate this on the US State Department website in Colombia.

Since I’ve lived abroad for many years, I understand the importance of being capable of relying solely on oneself, but I do find it interesting that there’s been little clarity on this situation from the Trump administration, nor have there been any notices sent out by the US Consulate in Bogotá.

During my years living in the Middle East, I received frequent updates from the US Consulate in Oman with very specific guidance on how to handle terrorist threats as well as the unrest that resulted from the 2011 Arab Spring uprisings. US citizens also received constant updates concerning the spread of the coronavirus known as MERS which was mainly confined to that region. It seems that Trump’s aim of gutting the US State Department has been achieved.

UPDATE: Just received a message from US Ambassador to Colombia, Philip Goldberg, informing Americans about the situation with COVID-19 in Colombia and the government rules as they relate to the current and upcoming longer term ‘quarantine for life’ as it’s being called. Better late than never…

On a Personal Level

The big question we all must ask ourselves now is how are we going to choose to deal with the uncertainties of living through a pandemic that may last for twelve to eighteen months, or until a vaccine can be developed. The answer to this seemingly daunting question appears to be taking shape organically in countries from Asia to Latin America.

Individuals are realizing the importance of taking personal responsibility for their own health as well as that of others by adhering to the rules of social distancing while at the same time doing whatever they can to help the very old and those with underlying health conditions – the ones most at risk. While the hoarding of toilet paper and food in parts of the USA has revealed a greedy and selfish side of human nature, for the most part people are making the 1980s slogan ‘practice random acts of kindness’ a part of their daily lives.

I must admit, it’s taken some time for me to come to grips with this new reality. My trip to visit friends and family in the USA, planned for April and May, has been cancelled as have my local Spanish  lessons. When venturing out to buy food, I’ve also had to fight against the notion that everyone I encounter is a danger. Surely, there are precautions we can take without adopting an ‘us vs. them’ mentality.

In all honestly, mandatory isolation isn’t a drastic change for me since I’d become accustomed to spending a lot of time alone at home before this started. But I will miss my daily walks into town for fresh produce, the much needed exercise and the language practice I got during short chats with local store owners. The current rules here allow people 20 minutes outside to walk their dogs, so I may have to find a pooch of my own in order to enjoy that bit of freedom.

I’m also trying to count my blessings, of which there are many. I’m lucky to have an apartment that overlooks beautiful green parkland filled with the sounds of birds singing – a luxury I could never afford back in the USA. As long as the internet signal remains strong, I’m convinced I can adapt to life without physical contact, except for the occasional food run or quick exchange with a delivery person.

I’ll be spending a lot of time contemplating the beautiful green view of a park, river and wetland from the balcony of my small apartment in Rionegro, Colombia. Note: that’s a bike path, not a public street, in the foreground. Photo: Henry Lewis

Over the past few weeks, I’ve been spending more time video chatting and exchanging text messages and emails with my wonderful friends in far-flung places across the globe. Hearing about the lives of those we love does wonders to take our minds off our own worries. This is the time to savor the benefits of technology and use social media to support our most important relationships. If the internet goes, well then, all bets are off!!!

Many supermarkets and pharmacies in my Colombian town are providing delivery services, as is true in other parts of the world. As time goes by, we may become much more reliant on these heroes who are risking infection by being constantly on the go as they deliver door to door. We should be aware of expressing our gratitude to them in both verbal and monetary ways.

Of course, the real heroes in all this are the medical professionals who are literally risking their lives to care for the sick. We must be proactive in demanding that our respective governments provide the medical community with all the protective gear and other supplies they need to avoid becoming infected. They are the soldiers on the front lines of this battle and all of our lives are more at risk if their safety isn’t given top priority.

While the impoverished on our planet have always lived with the knowledge that they and their children were vulnerable to deadly infections, this is a brave new world for many of us in the West.

I’ve experienced living through a military coup in Thailand as well as terrorists’ threats in the Middle East. After 20+ years of solo travel, I’ve also placed myself in more questionable circumstances on unfamiliar (and dark) big-city streets than I’d like to admit. Perhaps I can draw on some of those past experiences for wisdom and strength now as I anticipate the unique challenges of our shared near-term future.