Many Americans still ask if it’s safe to travel to Colombia. Their vision of this visually stunning and culturally rich nation is rooted in past decades when violent drug cartels run by infamous leaders such as Pablo Escobar ruled the streets of the country’s major cities and when left-wing guerrilla groups dominated large swaths of the rural countryside. This is part of a complicated history that many Colombians have tried to put behind them, even though popular TV productions such as Netflix’s “Narcos” have made turning the page more difficult. Over the past two decades, Colombia’s citizens (often in spite of their government’s actions) have made great strides in creating safer communities where the country’s rich heritage and wealth of cultural diversity are now on full display.

Colombia’s Past is fading but not forgotten

A decades-long period of political instability began soon after the assassination of presidential candidate Jorge Eliecer Gaitán in Colombia’s capital, Bogotá, in 1948. By the 1980s and ’90s,  government chaos, a lack of security and rampant corruption led to the formation of extremely powerful and rich drug cartels that supplied a booming cocaine market in the USA.

The two most legendary drug cartels were based in  Medellín and Cali, Colombia’s second and third most populous cities respectively. Previously, much of the violence raged in the countryside where millions of farmers and their families were displaced, many fleeing to the outskirts of cities. In the ’80s and ’90s, the dynamics changed with the added stake in controlling profitable cocaine transit corridors worth billions of dollars, and the bloody violence spread to many of the country’s major cities.

What newcomers see today is a far cry from 1990s Medellín when the city was labeled with the unenviable distinction of being the murder capital of the world, thanks in no small part to Pablo Escobar’s control of the Medellín cartel and its constant feud with the rival cartel in Cali. The drug lords were at times in conflict with, and at other times in cahoots with, right-wing paramilitary groups sponsored by some of the government’s most powerful politicians as well as some of the country’s largest corporations.

Beginning in 2000, the US Government, along with the CIA working within Colombia’s borders, pumped billions of dollars into helping security forces (yes, the same ones who were often supporting right-wing death squads) defeat the old Communist threat posed by the FARC and other left-wing guerrilla groups. The US initiative, named Plan Colombia, would later be criticized for helping Colombian authorities to carry out murder, displacement and other human rights abuses. 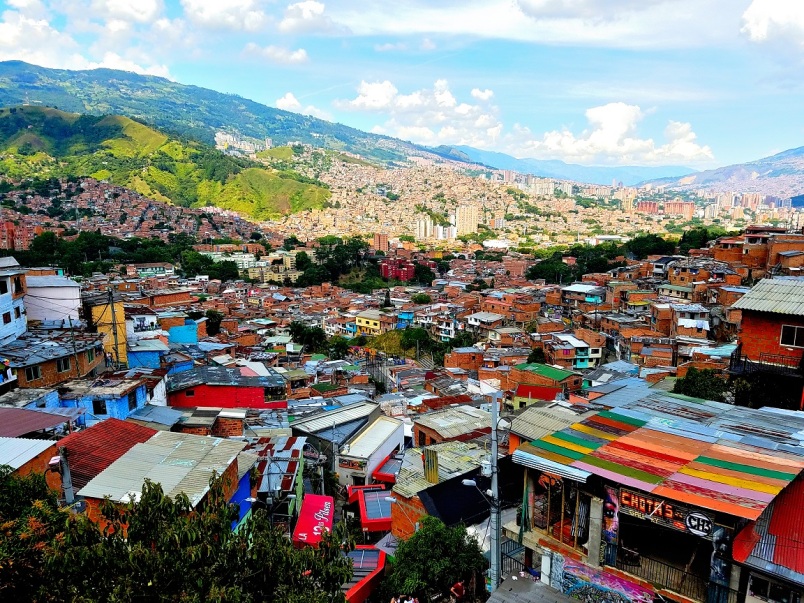 View to the north from one of the steep slopes in the heart of Medellin’s Comuna 13. Photo: Henry Lewis

A prime example of Medellín’s (and the country’s) dramatic transformation is Comuna 13, a neighborhood that clings to the mountain slopes on the western edge of the city. The neighborhood, also known as San Javier, is one of the city’s 16 numbered districts and has a population of around 135,000 very determined souls who have proven that it’s possible to turn what was once a war zone into a booming tourist destination.

During the second half of the 20th century, settler-created neighborhoods such as Comuna 13 sprang up on the edges of Colombia’s cities as poor rural farmers and their families were forced to flee the violence in the countryside for the relatively safer conditions in urban areas. With little money or government aid, the displaced masses built illegal homes on steep mountain slopes (land deemed too unstable for construction by local governments) just outside official city boundaries. This meant these poor neighborhoods had little access to public services such as electricity, water, transit, medical care or public education.

Medellin’s Comuna 13 (San Javier) is situated on a steep mountain side on the western edge of the city. Neighborhoods such as this are often more prone to mudslides and earthquake hazards due to the difficult terrain and lack of building code enforcement.

As if living in abject poverty and without municipal services wasn’t a harsh enough fate, the isolation of these illegal districts made them attractive for the establishment of criminal networks since it was difficult for police to mount raids in areas without street access. Comuna 13’s location near a main highway linking Medellín to the Caribbean coast further sealed its fate as an illicit drug transit corridor. Still, prior to the mid-1990s, the homicide rate in Comuna 13 was lower than that of the city of Medellín as a whole.

This all changed in the late 1990s when paramilitary groups decided to root out (and take over) the drug operations of the neighborhood’s already established gangs. This full-scale war terrorized the citizens of Comuna 13 as the homicide rate tripled between 1997 and 2002, going from a relatively low 123 to a frighteningly high 357 per 100,000 population. Those statistics made Comuna 13 the most dangerous neighborhood in what was considered, at the time, to be the world’s most dangerous city.

A mural in Comuna 13 representing both the scars of the past and resident’s hope for a brighter future. Photo: Henry Lewis

During this period, the daily violence between rival gangs in this single neighborhood led to the forced displacement of more than 1,200 individuals and families who had to once again flee from their homes in search of a safer environment. However, fate had yet to deliver the almost fatal blow to a population of already beleaguered residents. 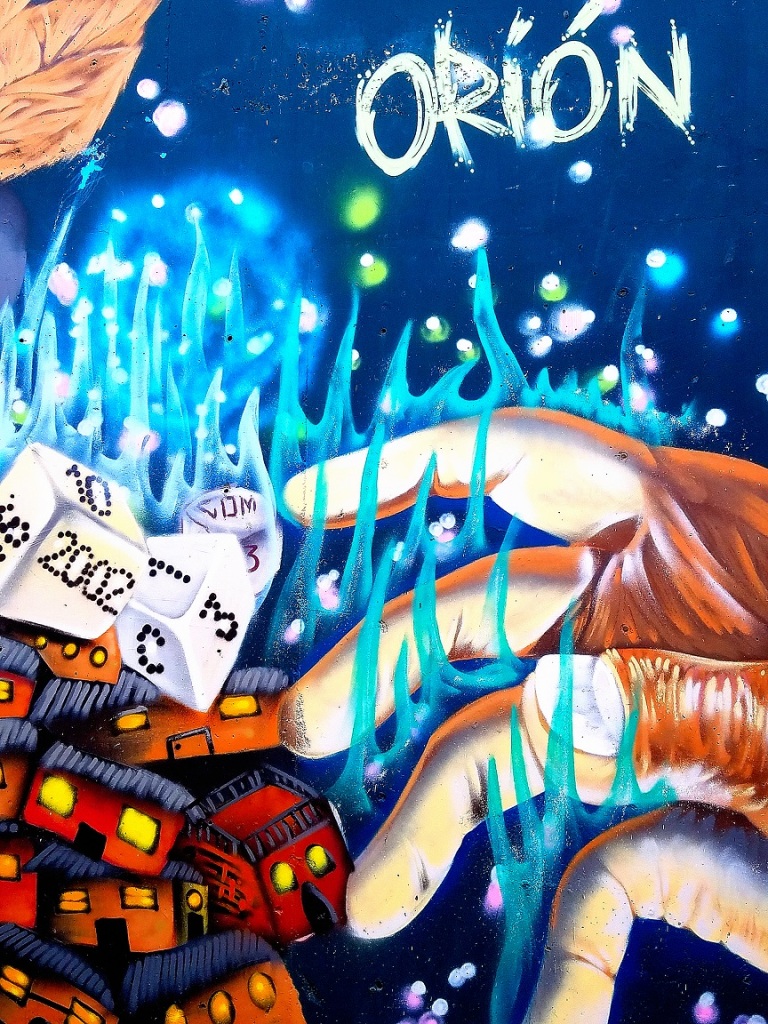 In October of 2002, the Colombian military, working with the CIA and American government funding, launched Operation Orion attacking leftist guerrillas living in Comuna 13. During the siege, the skies over Comuna 13 were filled with helicopters and the streets were filled with gunfire. More than 1,000 policemen and soldiers attacked the neighborhood. Innocent civilians were caught in the crossfire, wounded, tortured, and detained by authorities.

The  2002 operation became known for the widespread human rights violations it generated. But it is far from the only controversial military campaign during Colombia’s five-decade-long war, which was amped up in the 2000s with a U.S. security assistance package known as Plan Colombia that injected more than $10 billion into the bloody war over the course of 15 years.

During the conflict, residents banded together helping to care for those unable to seek medical attention. The community reacted together in solidarity, waving white flags, and calling for peace. It was this decisive act that finally ended the fighting on the fourth day. Many residents were killed, including children, but exact numbers are unknown. Many more disappeared and recent searches have located mass burial sites nearby that may contain hundreds of bodies disposed of during and immediately after Operation Orion.

A mural in Comuna 13 showing Donald Duck and his ‘golden vape’  which represents the attitudes of many residents toward continued American interference in Colombian affairs. It speaks directly to the use of American funds in Colombian military campaigns that have terrorized communities such as Comuna 13. Photo: Henry Lewis

A continuing work in progress

Following these traumatizing events, local residents slowly began to rebuild from an operation praised by Colombian authorities as one of the most successful offensives against illegal armed groups to date. While the murder rate may have dropped the day after the operation ended, the suffering of the neighborhood’s residents lingered as they tried to rebuild their lives and community. 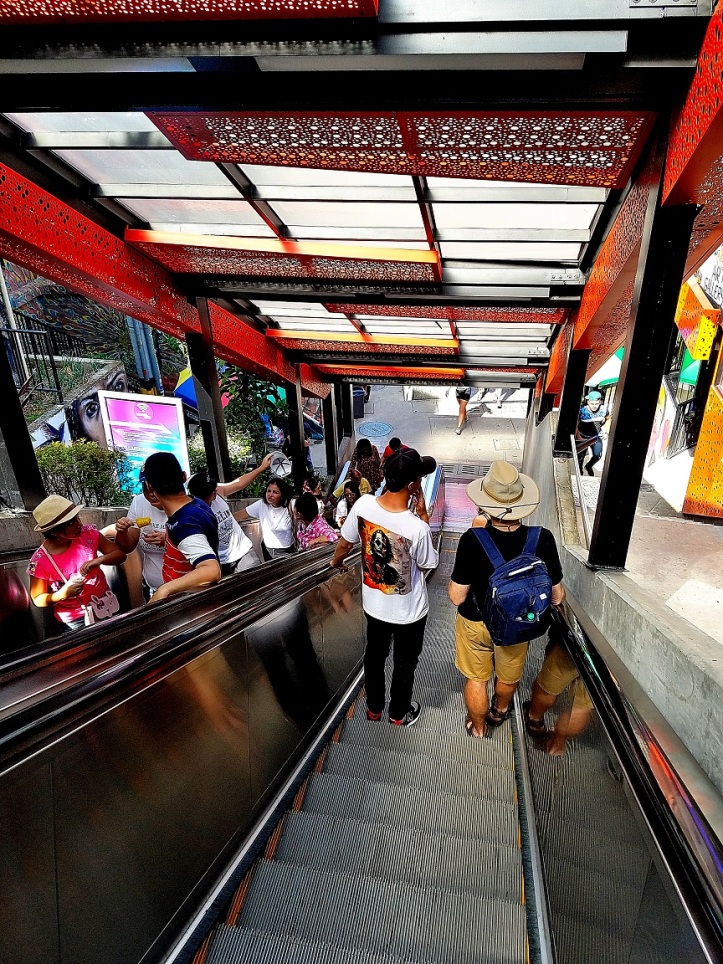 One of the most important infrastructure investments in Comuna 13 has been the construction of a series of escalators that climb the steep hillsides, enabling residents to easily connect with opportunities offered by the city of Medellin. Photo: Henry Lewis

Cycles of rebuilding followed and along with the changes came increased community cohesion along with a vision for the future. Over the past 10 years, development funds have provided infrastructure projects such as a metro train link on the ground, a metro cable system above and a series of escalators that climb the steep hillsides. These projects demonstrate the commitment by Medellín’s leaders to ensuring Comuna 13 residents are connected with the entire city along with the opportunities provided by such access.

The community’s desire for a peaceful future is represented in many of the street murals that cover the walls of structures in Comuna 13. Photo: Henry Lewis

Utilizing the talents of local creative artists has been a main focus of neighborhood revitalization. Retaining walls and other structures in Comuna 13 became giant canvases for street murals, many of which illustrate both the community’s past struggles and hope for a more peaceful future. Schools teaching art and other skills have been established to encourage and nurture this local talent.

Exterior mural on a school in Comuna 13. Photo: Henry Lewis

While the visual arts have had a dramatic effect, street music and an ever-evolving dance scene have also given the neighborhood’s youth creative outlets that didn’t exist in the past. Live performers give almost continuous daytime shows to the ever-growing throngs of tourists who flock to Comuna 13 each day. Cafes and restaurants owned and operated by locals – often from their own living rooms – have mushroomed along with guided tours of the neighborhood that tell emotionally powerful stories of local resilience.

Exterior mural on one of the many restaurants opened by residents of Comuna 13 that cater to the ever-growing number of tour groups that descend daily on the neighborhood. Photo: Henry Lewis

Rebuilding the social fabric of a neighborhood is no easy task and the residents of Medellín’s Comuna 13 have faced enormous challenges in transforming their neighborhood. Even though most businesses still close soon after dark and locals agree there’s still a lot of work still left to do, there’s no denying that the transformation from war zone to thriving tourist hub (at least during the day) has greatly improved the lives of those who call Comuna 13 home.

Fully understanding the complexities of the conflicts that raged across Colombia for half a century is beyond the scope of this post. Suffice it say the current peace process within the country is grappling with ways to bring justice to victims without further tearing the country’s social fabric apart. The stakes are further heightened by one of Lain America’s highest rates of economic disparity.

Despite this and the many stumbling blocks that remain in the path of fully implementing a 2016 peace deal the government signed with some of the country’s largest guerrilla groups, I choose to be as optimistic as most of the Colombians are that I’ve met. If a burning desire by a nation’s people to live in peace and harmony is any measure, then Colombia surely has a bright future ahead.