Venus Figures are small bone, ceramic or stone carvings which exhibit exaggerated female breasts and hips. The term ‘Venus figure’ is strictly used as a metaphor for the female form. These carvings predate the mythological Venus – the Roman goddess of love, sex, beauty, and fertility – by thousands of years.

Venus figures are unique and hold artistic and cultural significance simply by being the earliest representations of humans in sculptural form. They also mark humanity’s earliest use of ceramic materials. 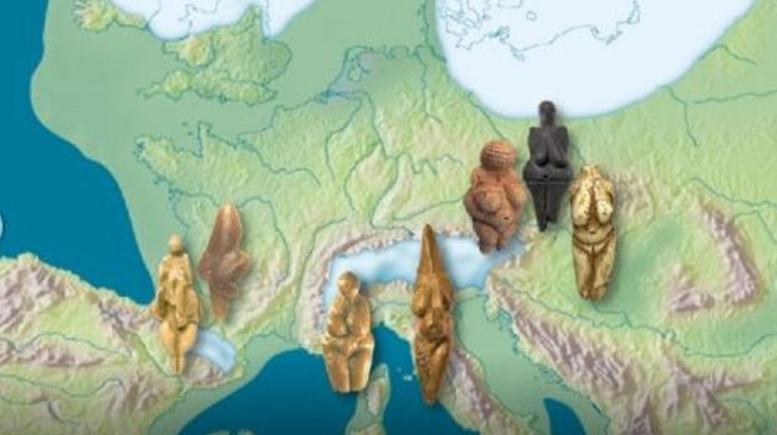 Venus Figures have been found all across Europe. Map Credit: Natural History Museum of Vienna.

The majority of these mysterious figurines date from the Upper Paleolithic (Old Stone Age) period between 50,000 and 10,000 years ago. This period contains the first archaeological evidence of small-scale human settlements along with more complex social organization. Numerous cave paintings, petroglyphs and carvings and engravings on bone and ivory indicate a blossoming of the arts during this period.

My first introduction to these figures came in the 1990s when I noticed a friend wearing what she called a ‘goddess’ amulet on a chain around her neck. I was immediately struck by the silver charm’s robust proportions as my friend told me what she knew about the origins of the figure.

Many years later, when I encountered some of these ancient female figurines in European museums, my curiosity was once again piqued. While it was fascinating to visually examine such ancient sculptures and try to imagine the world of their creators, I wanted to understand why these objects were created and what purpose or significance they had within their respective cultures.

Archaeological evidence of unique female carvings has been found from Morocco to Russia, but the most studied figures are of European origin. Of these, the oldest is known as the Venus of Hohle Fels which was unearthed in a cave in southwest Germany in 2008.

The Venus of Hohle Fels is carved from mammoth ivory, is 2.4 inches in height (6 cm) and is dated to between 35,000 and 40,000 years ago. It is the oldest undisputed example of Upper Paleolithic art and figurative prehistoric art. This tiny sculpture is particularly celebrated because it’s believed to be the earliest known depiction of a human. There is also evidence that the Venus of Hohle Fels may have been worn as an amulet. 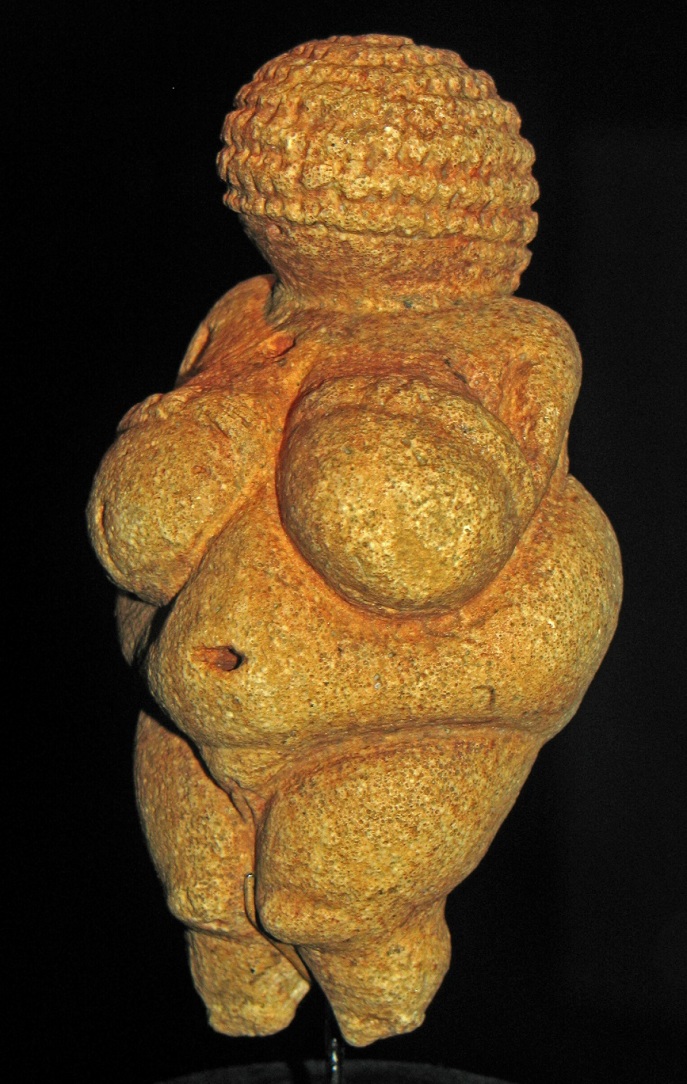 The Venus of Willendorf was discovered in 1908 in Austria during an archaeological excavation. The 4.4 inch (11.1 cm) high figure was carved from limestone, and was covered with a thick layer of red ochre when found. There has been a great deal of speculation about the decoration on the figure’s head. Its face is covered in what might be rows of plaited hair or a woven hat or headdress.

Figure 3 – The Venus of Moravany can be seen at the Slovak National Museum in the capital Bratislava. Photo Credit: Don Hitchcock 2008.

The Venus of Moravany was found sometime before 1930 by a farmer plowing a field near the village of Moravany nad Váhom in northwestern Slovakia. The figure is just under 3 inches (7.6 cm) tall and was carved from mammoth tusk. It dates to around 23,000 BCE. 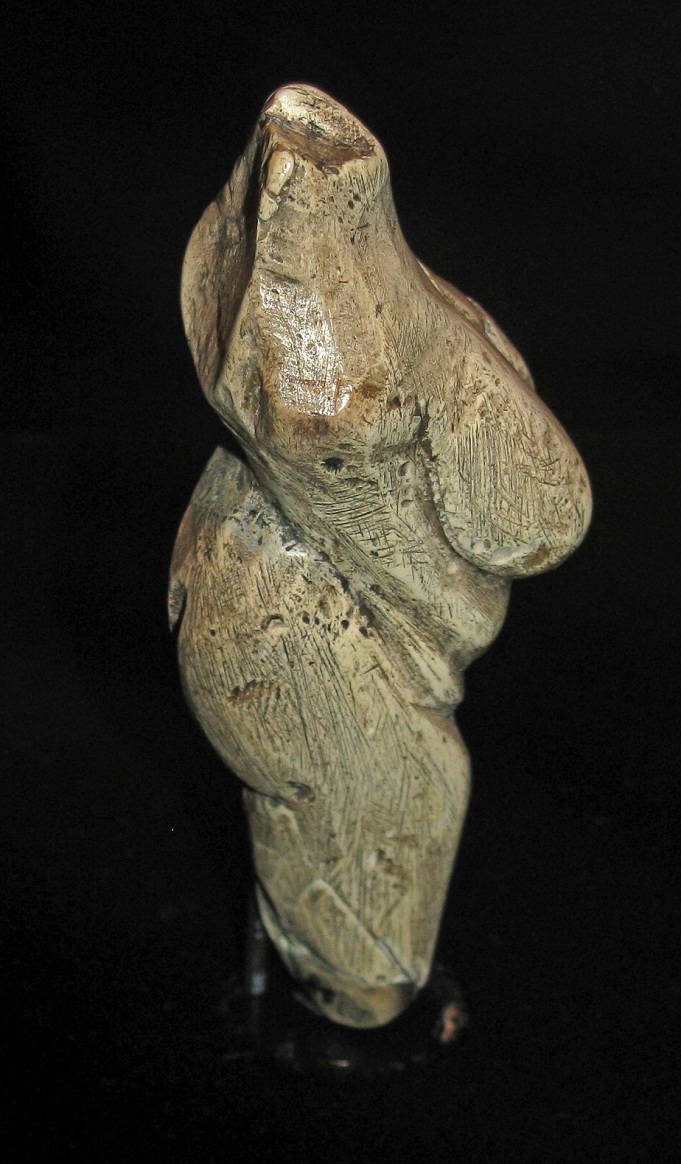 The Venus of Moravany – side view. Photo Credit: Don Hitchcock 2008. 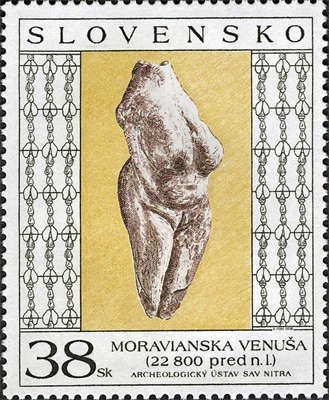 The Venus of Moravany as depicted on a Slovakian postage stamp . Date of Issue 20 October 2006.

According to the research undertaken by Alan F. Dickson and Barnaby Dickson and summarized in Venus Figures of the Upper Paleolithic: Symbols of Fertility or Attractiveness, there has been a great deal of debate among archaeologists pertaining to the function of these carvings within ancient civilizations. Some researchers have argued that the figures were carved by men, while others believed women created them in the image of their own bodies.

1) The statuettes might be realistic depictions of actual women.

3) They could represent fertility symbols.

4) They might have religious significance and be depictions of priestesses.

5) They could represent images of ancestors.

Firstly, a minority of images may have been intended to represent young, sexually attractive adult females. These might truly be considered as “Venuses” in the conventional sense.

Secondly, a subset of figurines represented changes in body shape during pregnancy and might be symbols of fertility.

Thirdly, the figures depicting corpulent and often middle-aged women, may not have been “Venuses” in any modern or conventional sense. They may, instead, have symbolized the hope for survival and for the attainment of a well nourished – and reproductively successful – maturity during the harshest period of the major glaciation in Europe.

Whether goddess or Mother Earth figures, these mysterious carvings are a fascinating reminder that for thousands of years humans have sought divine intervention as a means of overcoming the ever present dangers of famine, illness and natural disaster.

Special thanks to Don Hitchcock. You can check out his very informative site Don’s Maps by clicking here.