Donald Trump and the Corona Virus: Can He Be Trusted?

Even though our factual truth is never completely free of interpretation or personal perspective, this situation cannot serve as an argument against the existence of reality and facts, nor can it justify blurring the dividing lines between fact, opinion, and interpretation. The outcome of such blurring is a confused public that cannot differentiate between fact, fabrication, and opinion.

The mid-20th century writings of Arendt seem prophetic in today’s post-truth world where maintaining political advantage often outweighs the common good. In such an era, what happens when a confused public is faced with contradictory information relating to a topic as important as public health? A comparable scenario was created this week by the Trump administration while discussing the level of risk the US population may face from the current world-wide corona virus (COVID-19) epidemic.

The stage was set by acting White House Chief of Staff Mick Mulvaney who accused the media of stoking virus fears to “bring down the President.” Mulvaney’s comments were purely political and had no basis in fact, and indeed, ignored the seriousness of the worldwide COVID-19 epidemic. They also fly in the face of health experts worldwide.

In an interview with the BBC, the World Health Organization’s (WHO) director of health emergencies, Mike Ryan, noted the advice posted on the official WHO website on Friday, February 28. “We have now increased our assessment of the risk of spread and the risk of impact of COVID-19 to very high.” This is the WHO’s highest level of warning.

The WHO warning calls for “all countries to educate their populations, to expand surveillance, to find, isolate and care for every case, to trace every contact, and to take an all-of-government and all-of-society approach.” According to the US Centers for Disease Control (CDC), “the potential public health threat posed by COVID-19 is high, both globally and to the United States.” 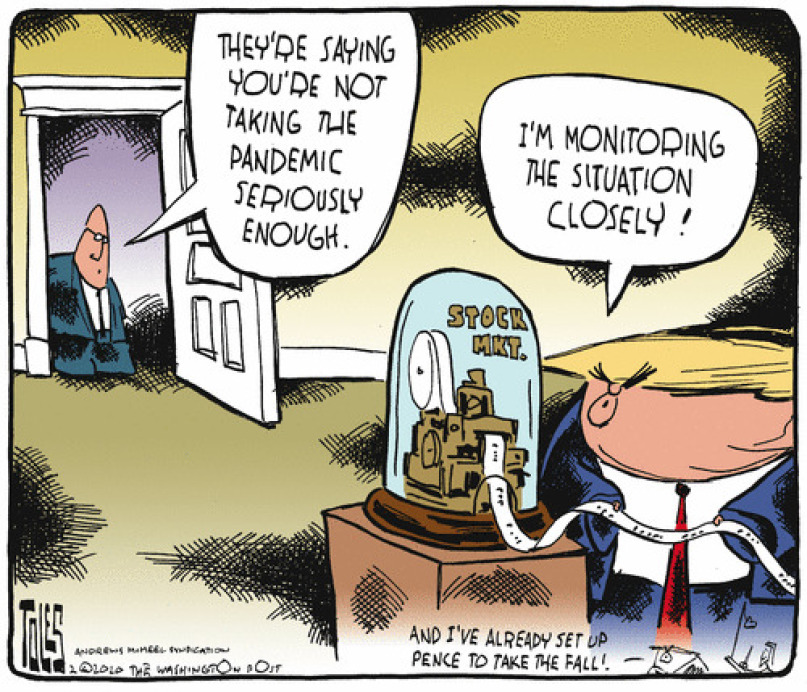 During the past week as higher level warnings were issued by both the CDC and the WHO, Trump and his administration have made reckless statements claiming that COVID-19 is no more deadly than the seasonal flu and that US containment of the virus is close to airtight. A recently released study of 72,000 COVID-19 cases reported in mainland China, there was a mortality rate of 2.3% , while mortality rates for the seasonal flu in the US average 0.1%. The same study concluded that COVID-19 is less deadly than SARS or MERS – corona viruses that caused past epidemics – but is more easily passed from one person to another.

While some may quibble over the use of certain words or note that statistics regarding COVID-19 are constantly changing as the virus continues to spread, medical professionals urge caution. “It’s really important for the U.S. government to be speaking with one common voice about these issues right now,” said Tom Inglesby, an infectious diseases physician and director of the Center for Health Security at the Johns Hopkins Bloomberg School of Public Health.

At a press conference this week, Trump went so far as to contradict the words of the highly respected Dr. Anthony Fauci, the head of the National Institute of Allergy and Infectious Diseases, while discussing the time line for producing a vaccine for COVID-19. During the same press conference, Dr. Fauci stated that while vaccines to combat this new corona virus are being developed as quickly as possible, it will most likely be a year before they would be ready for the public. Trump took the opportunity to refute this by saying, “the vaccine is coming along well, and in speaking to the doctors, I think this is something we can develop fairly rapidly.”

In a campaign appearance in South Carolina on Friday, Trump called the COVID-19 virus “the democrats new hoax.” The president then proclaimed that his wall on the U.S. border with Mexico, a country that has so far reported only a single case of the virus, would help prevent the spread of epidemics. “We must understand that border security is health security,” Trump said. He continued, “The Democrats’ policy of open borders is a direct threat to the health of all Americans and you see it with the coronavirus.” Really?

In a further effort to use this public health emergency for political gain and to further inflame division and discord, Donald Trump Jr., in an appearance on Fox News Friday morning, said Democrats were rooting for the corona virus to “kill millions of people.”

Trump’s appointment of his sycophantic vice-president Mike Pence – instead of someone with a medical background – to spearhead US efforts to contain the virus has also sown distrust among those who fear that all information regarding the spread of COVID-19 within the US will first have to be cleared by the Trump administration before being disseminated to the public.

At the latest press conference held on Saturday, February 29 following the first US death due to the COVID-19, Trump tried to appear more transparent, going so far as to have Dr. Fauci assure the press (and public) that he is not being muzzled by the administration and that all relevant information will be passed on to the American public.

But, here’s the problem. After three years and thousands of documented lies, Mr. President, why should the American public believe anything you say?

Trump’s words and actions reinforce the American population’s sense that he wants to stifle the media and shut down any criticism of the US government, and more specifically, his administration. At every turn during his presidency, he has sought to discredit scientific findings whenever they didn’t fit neatly within the scope of his personal ambitions. We should recognize these traits for what they are – the hallmarks of an authoritarian leader.

I’ve personally witnessed similar authoritarian scenarios play themselves out in cultures where I’ve lived from Southeast Asia to Latin America. Controlling the narrative by silencing the media becomes an all important strategy when a leader aims to manipulate an uninformed population to think and act in the way that leader desires.

However, there is far more at stake here than scoring political points against one’s opponents. In the case of a natural disaster, terrorist attack or public health emergency, the ramifications of withholding vital information from citizens could become a life-threatening issue.

While there is a possibility that Trump might be able to muzzle the CDC to some degree, (thankfully) he has no authority over the WHO or other health agencies outside the USA. Still, it seems that Trump is setting up a scenario where the American public is being asked to decide whether they believe his words or those of health experts when assessing their own risk (and that of their family) within the context of the still-unfolding situation in the USA.

Trump’s dislike of – and feud with – the mainstream media began long before he became the US President. The former reality TV star merely stoked the flames before and after his election in order to endear himself more intensely to his conspiracy-theory-obsessed core supporters.

Unfortunately, by now many of Trump’s followers are conditioned to drinking his Kool-Aid, an elixir that dampens their ability to think critically and question his proclamations that the ‘fake news’ is the ‘enemy of the American people.’

Whatever level of greatness the USA has produced over the past two centuries has been the result of citizens using their critical thinking skills to ask the most informed questions and find new pathways to solve problems. Those are the very skills the Trump administration asks citizens to disengage.

Ever since U.S. Counselor to the President, Kellyanne Conway, declared there were ‘alternative facts’ back in 2017, Donald Trump has continually asked us to trust only his words and ignore science, the media and all other voices from outside his camp. 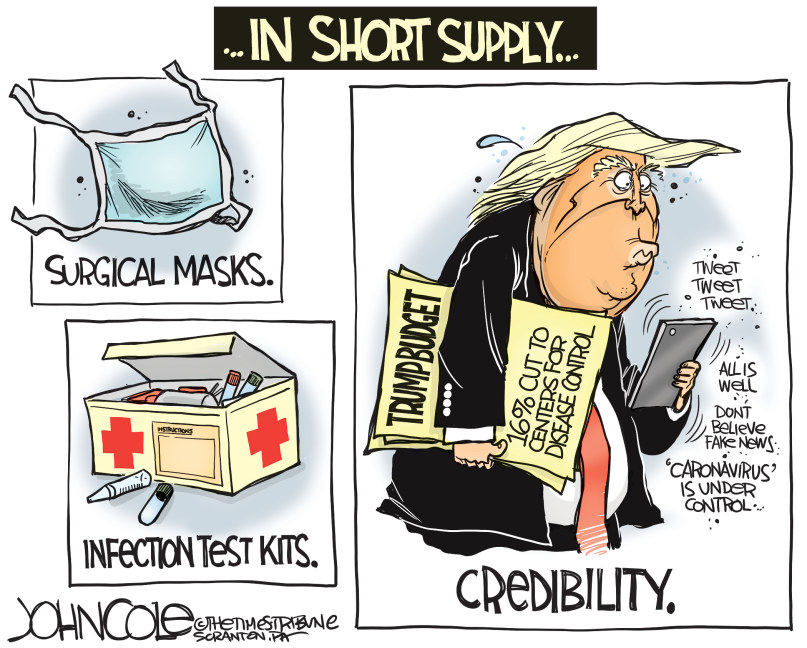 The fact that Mulvaney has been the ‘acting’ White House Chief of Staff for more than a year speaks volumes about the chaos within the Trump administration. Mulvaney was pulled away from his job as Director of the Office of Management and Budget and placed in his current job in January 2019, relinquishing many of his duties (but not his job title) to Deputy Director Russell Vought.

Trump chooses those willing to pledge personal loyalty over job qualifications. In other words, based on Trump’s ever-growing paranoia, he appears to prefer having ‘acting’ directors who will echo the commander-in-chief’s words and can be easily moved around the chess board. Hey, this is easy. We have it all taken care is Trump’s oft-repeated proclamation.

While many of the President’s core supporters might think this is fine, they’re ignoring the key role that governments play in organizing and allocating resources during a time of crisis. The Trump administration’s revolving door policy for filling critical administrative positions should be a worry to all Americans.

Trump’s originally stated mission ‘to drain the swamp’ looks far more like a sustained campaign to silence all dissent, along with all those voices that have featured so prominently in creating American democracy for more than two centuries.

Let’s hope that during this time of public health concern, the Trump administration will allow the medical experts to reassure the American public with clear and unfiltered advice.

For constantly updated formation on COVID-19, click on the following websites:

US Centers for Disease Control (CDC):