Avowed atheist, proud communist, tempestuous lover and principled artist—Diego Rivera was all of these and much, much more. The Mexican painter and muralist, who lived from 1886-1957, became one of Mexico’s most well-known painters during a career that bridged multiple styles and brought the artist international acclaim.

Along with his now equally famous 3rd wife, the painter Frida Kahlo, Rivera’s boisterous life and works of historical narrative have taken on legendary status. However, Rivera was far from being a mere celebrity. According to Lynn Zelevansky, American art historian and noted curator, “Rivera was one of the great innovators of 20th century art.” 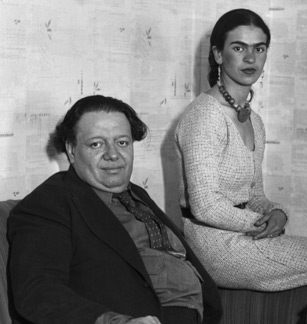 Diego Rivera and his artist wife Frida Kahlo, c. 1931. This photograph was taken in New York while Rivera was organizing a retrospective exhibition of his works at New York’s Metropolitan Museum of Modern Art (MOMA).

Rivera’s parents recognized his artistic talents at an early age and sent him to Mexico City to study formally at the Academy of San Carlos at the age of 10. In 1907, he traveled to Europe where he continued his studies, first in Spain and later in Paris and Italy. His work during this time was heavily influenced by important painters of two movements—Cubism and Post-Impressionism.

In 1921, after the end of the Mexican Civil War (1910-1920), Rivera returned to his homeland where his work became more political in nature. His belief that capitalism shared similar elitist tendencies with colonialism made him a crusader for the rights of workers as well as a strong supporter of Mexico’s indigenous peoples. 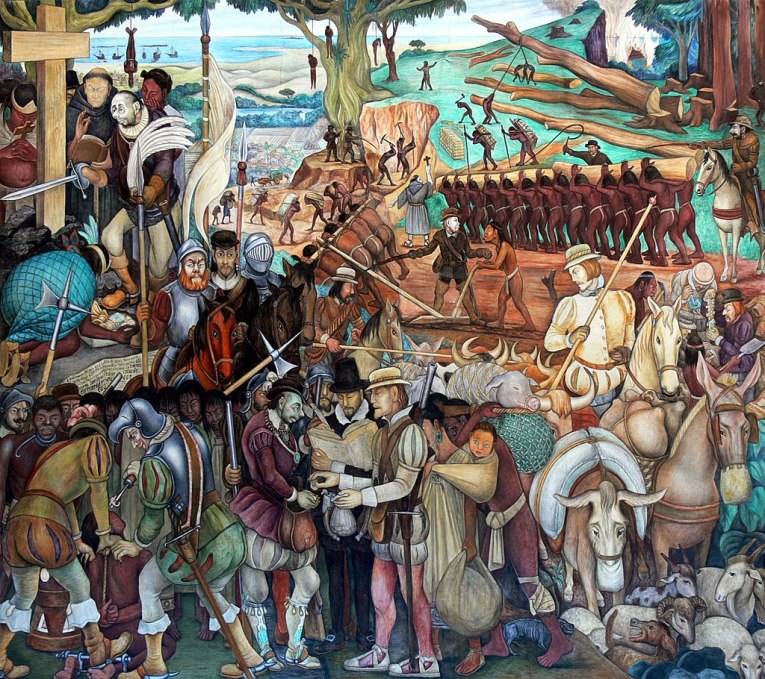 Many of his most well-known murals and frescoes celebrate common people’s struggles against their wealthy elite masters. His most emotionally stirring works—especially those in Mexico City’s National Palace–feature graphic scenes of the genocide perpetrated by the Spanish conquistadors against Mexico’s original indigenous inhabitants.

Arguably Rivera’s most infamous and powerful work is the fresco “Man, Controller of the Universe” (El hombre controlador del universe) which was originally titled “Man at the Crossroads” and painted on a lobby wall of the former RCA Building (now known as 30 Rockefeller Plaza) in New York’s Rockefeller Center.

By 1930, Rivera’s reputation as a master muralist, as well as his budding friendship with wealthy American families such as the Rockefellers, had garnered major commissions in San Francisco, Detroit and New York. He and Kahlo spent three years living in the United States while painting and immersing themselves in American culture. As is often the case when an individual chooses to live a robust life, things didn’t always go smoothly.

As Zelevansky puts it, “America was a backwater artistically at the beginning of this [the 20th] century, and Mexico was far ahead artistically.” Rivera was on a mission to make a name for himself as a Mexican painter in the hyper-capitalistic country north of the border. Needless to say, he was criticized by many of his fellow Mexican artists for selling out to the capitalists, although jealousy could have played a large role in such criticism.

Rivera’s fame brought him a choice commission–the featured mural for the lobby of the Rockefeller Center’s RCA Building, the largest and most expensive real estate development of its time. Rivera’s plans and sketches for the mural had been approved by the Rockefeller family as well as the development’s builders. However, in a gentle twist of the knife into the back of American capitalism, Rivera added two scenes to his three-panel design–1) a portrait of Vladimir Lenin, the founder of Russia’s communist party and first head of the Soviet State, and 2) a Soviet Russian May Day parade. 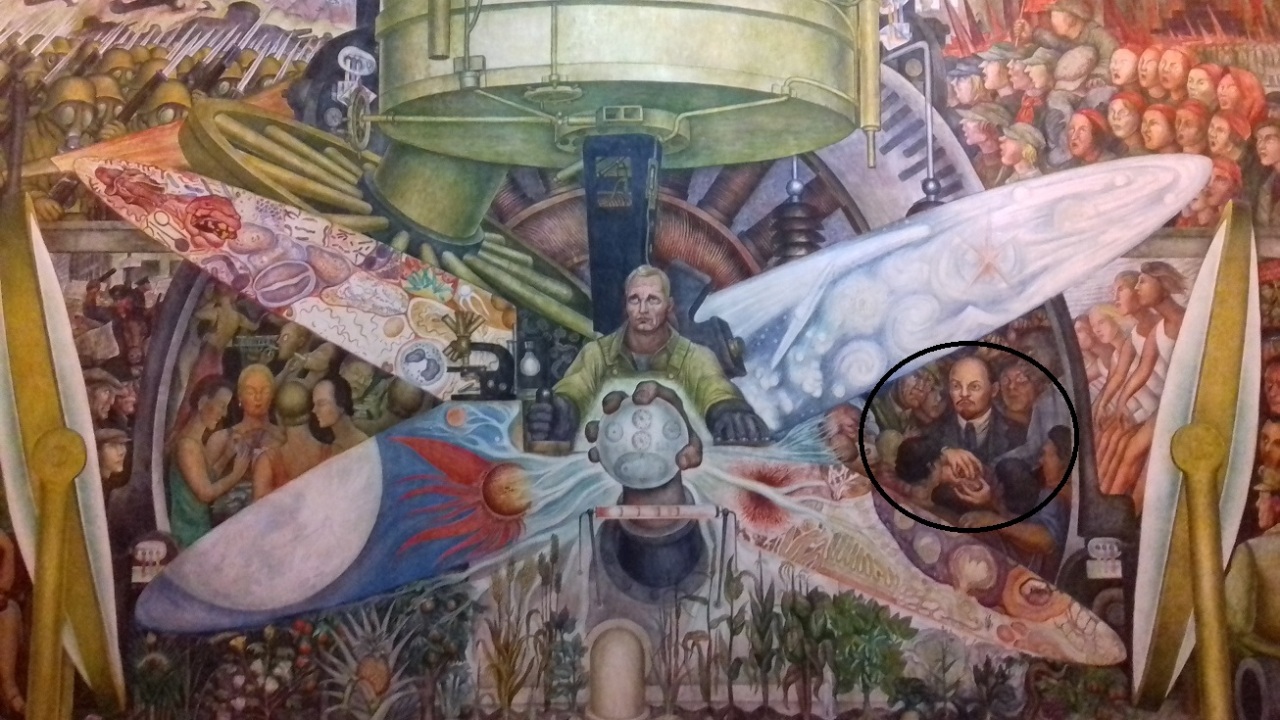 Vladimir Lenin can be seen just to the right of the great machine’s propellers with the marching Soviet workers in the upper right corner. “Man, Controller of the Universe,” Palacio de Bellas Artes, Mexico City, 1934.

The additions would have possibly gone unnoticed (at least for a while) if a worker painting the ceiling above the almost completed mural hadn’t dripped paint onto it. In an effort to assess the damage before cleaning the dripped paint from the mural’s surface, a closer inspection by one of the project’s managers revealed the portrait of Lenin.

Unsurprisingly, some members of the Rockefeller family as well as the project’s developers felt it was completely inappropriate to have such symbols of communism adorning the walls of a development that represented the very essence of capitalism. Rivera was asked to remove the two added elements from the mural, a request he defiantly refused to fulfill. Very quickly, a controversy erupted in the New York press and Rivera was asked to leave the building site and ordered not to return. Because of all the negative publicity, Rivera also lost a commission to paint a mural for an exhibition at the Chicago World’s Fair.

Luckily for lovers of Rivera’s work, one of the artist’s assistants was able to photograph the mural before it was destroyed. Adding a bit of additional intrigue, it isn’t clear whether the mural was peeled from the lobby’s walls and then destroyed or simply painted over.

Recreating the mural in Mexico City

Rivera returned to Mexico and in late 1933 was given permission to recreate the mural on a wall of the Palacio de Bellas Artes in the center of Mexico City. While examining this troubled period of Rivera’s professional life, biographer Bertram Wolfe wrote that the artist was not completely happy with this final location, but had been “looking for a public place where he could let men see what kind of painting it was that these ‘patrons of the arts’ had chosen to destroy.” 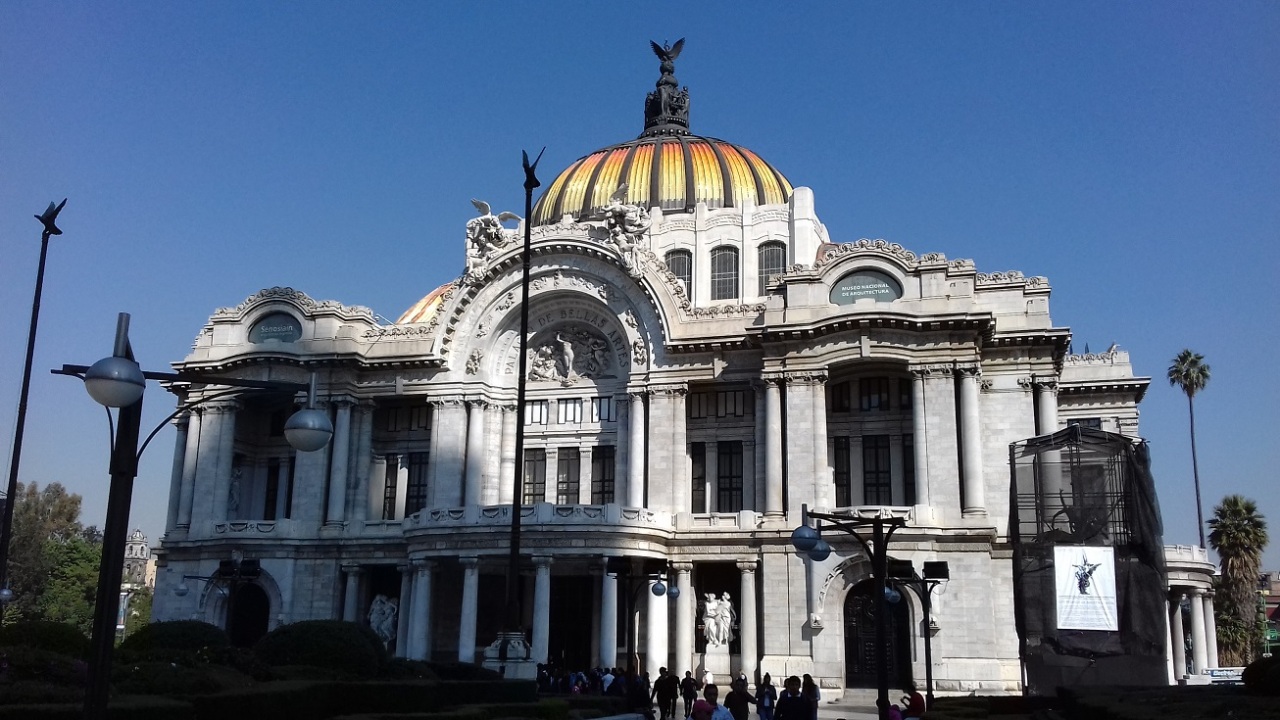 The Palacio de Bellas Artes is located near the historic center of Mexico City. 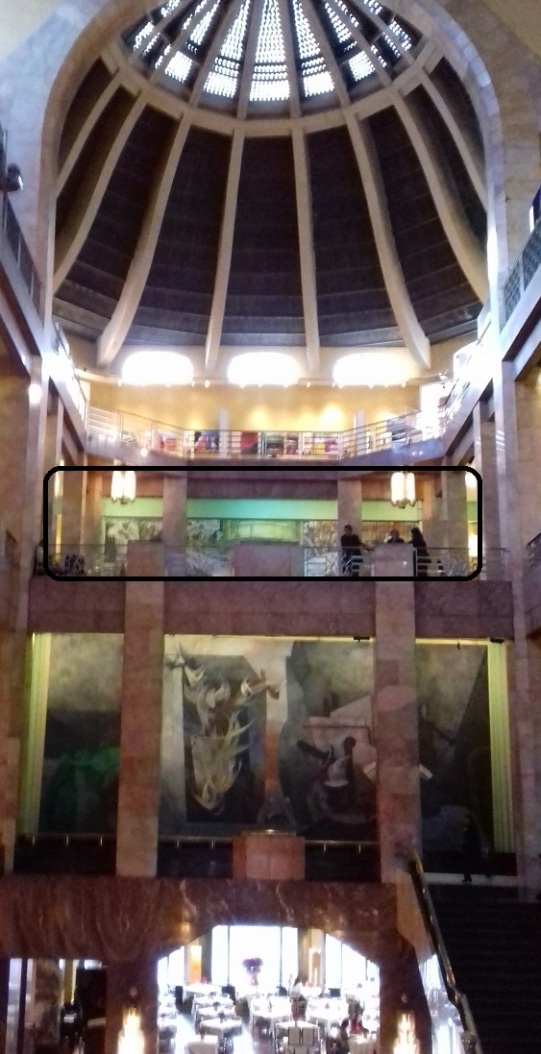 Location of Rivera’s mural ” Man, Controller of the Universe” on the second floor of the Palacio de Bellas Artes in the heart of Mexico City.

The mural Rivera recreated in Mexico City was smaller in scale than the original, but there were no restrictions placed on its content this time around. Rivera changed the mural’s title from “Man at the Crossroads” to “Man, Controller of the Universe,” a not so subtle commentary on the controversy of the previous year.

In the center of the mural, a worker wearing a resolute expression is seen operating a rather ominous looking machine. In front of him is a large hand holding an orb. Both the worker and the hand are complimented by four propeller-like shapes–depicting scenes of cell division and cosmology–that are being produced by two giant lenses on either side of the composition. Underneath this central view is a cross-section of the Earth’s surface where a variety of plants can be seen growing. 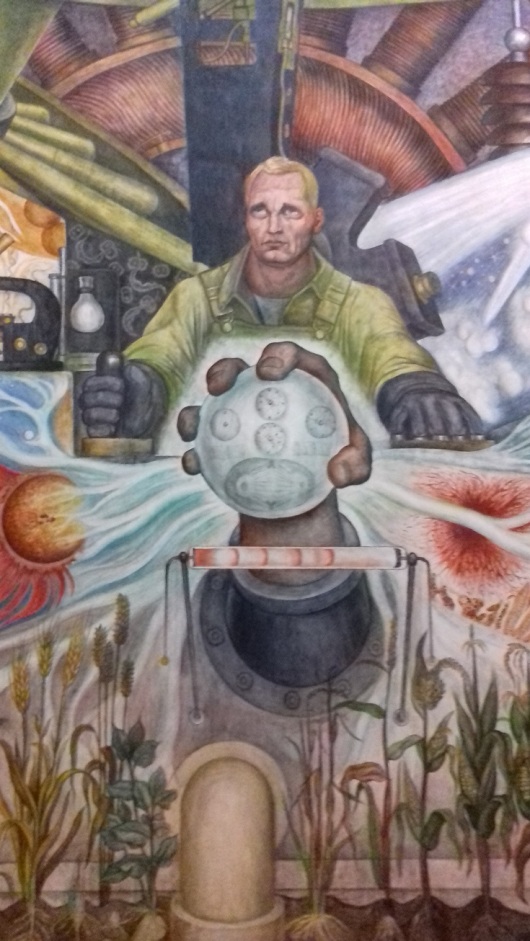 Detail of the center of the composition featuring a worker operating a machine and the orb-holding hand in front of him.

On either side of the man and machine, Rivera has presented contrasting social views. On the mural’s left side, Rivera painted society women playing cards as part of the inner circle. To their left outside the circle are a variety of other individuals of different races and gender. who appear to be in awe of the machine.

Rivera included Charles Darwin (with white beard) pointing at an ape. In the upper left portion of the work, armed soldiers wearing gas masks march into battle behind the figure of the angry Roman god Jupiter whose arm has been severed by a lightening bolt. According to biographer Wolfe, the left side of the composition represents The Frontier of Ethical Evolution. 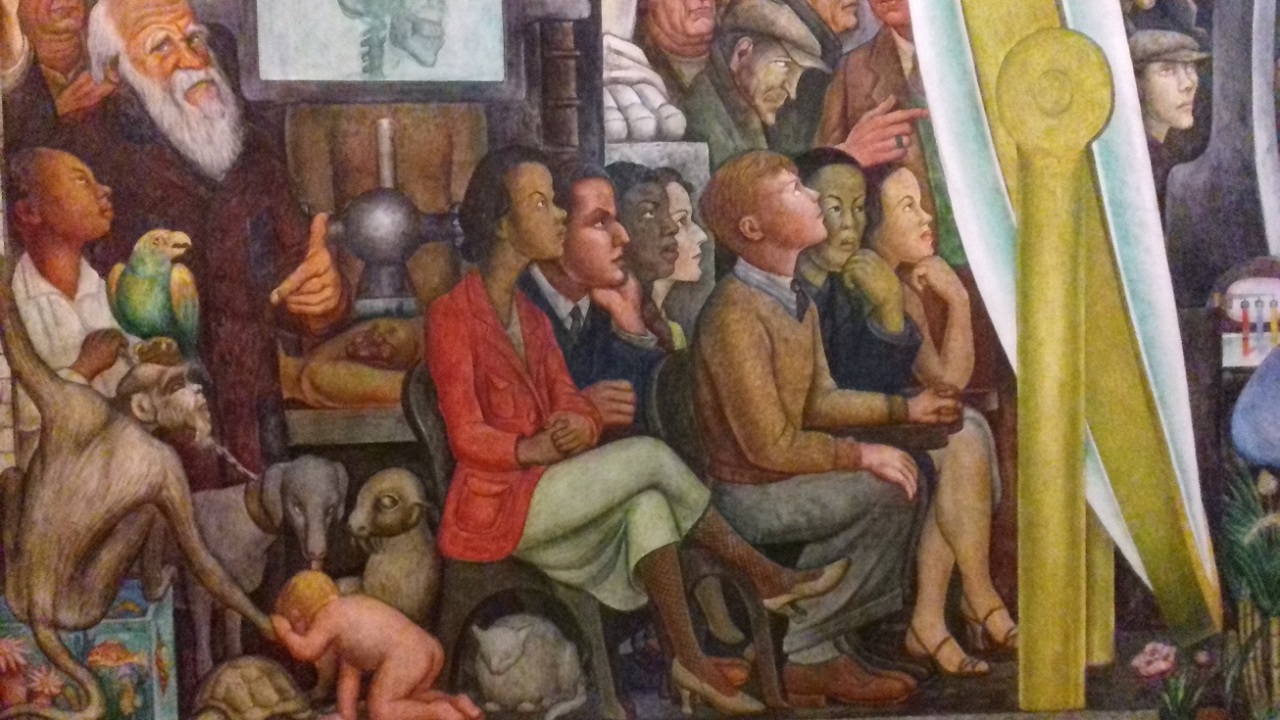 Left side detail of Charles Darwin surrounded by animals and pointing to an ape which is holding the hand of a human baby. 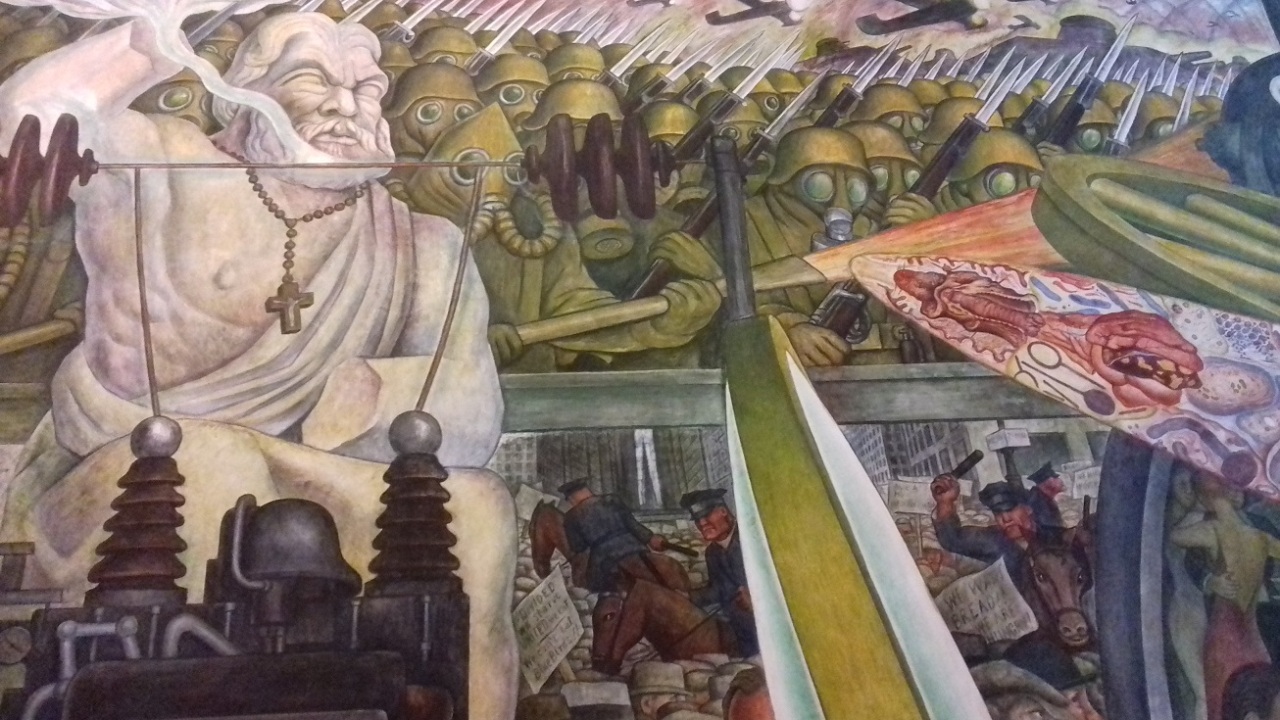 Another detailed view from the mural’s left side showing the Roman god Jupiter, police exerting their authority below and an army of soldiers marching into battle above.

On the right side, Rivera painted a scene of Lenin beside marching Soviet workers, identified by the red flags they carry and the women’s red scarves and men’s worker’s-style caps. Just in front of the workers is a headless statue of Roman emperor Caesar, signifying the rise of the poor, vulnerable masses and death of the rich, powerful elite. Wolfe states that the right side of the composition represented The Frontier of Material Development. 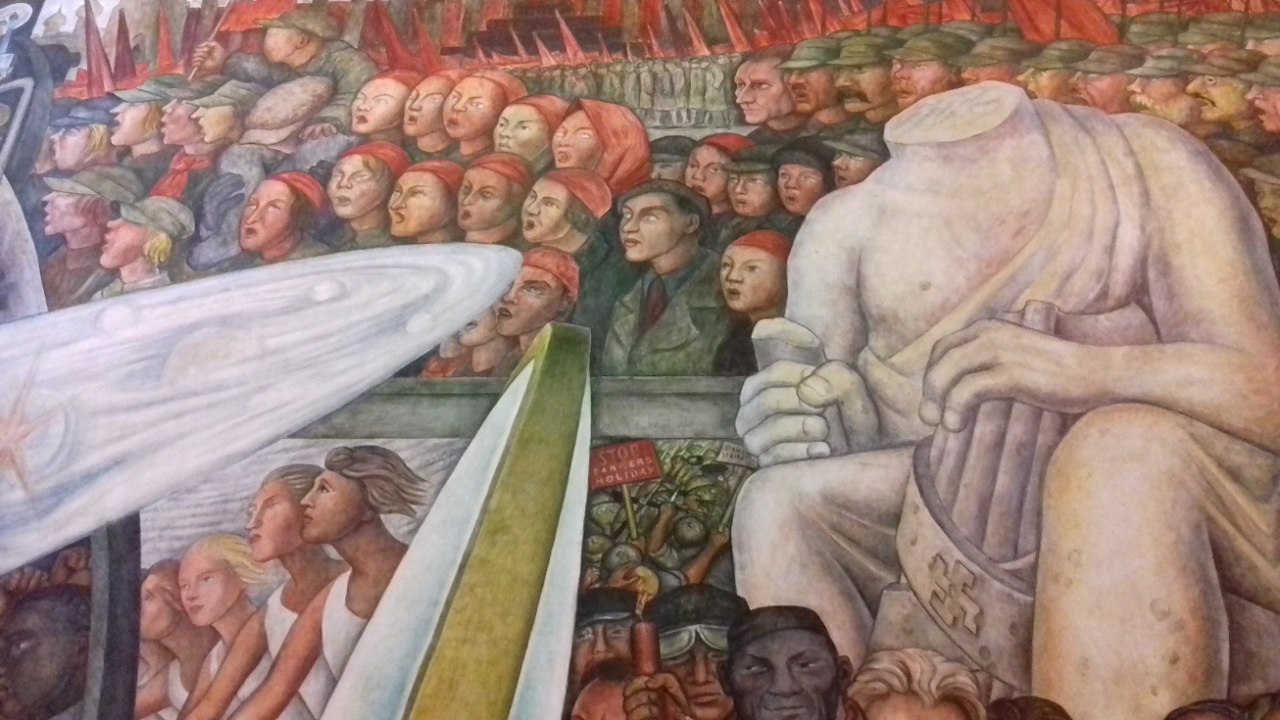 Detail of marching Soviet workers and the headless statue of Caesar on the right side of the mural.

As an art lover and great admirer of Diego Rivera’s work, I believe this mural has stood the test of time and still represents the world in which we live today. The margin of disparity between the rich and poor, which was at an all-time high during this period of the early 20th century but subsequently receded, has once again reached an equivalent peak. Thus, the same struggle between the wealthy elite who control the levers of power and the poor, vulnerable masses continues.

I’m fascinated by Rivera’s rich and complex symbolism and attention to detail. The artist designed and painted the two compositions (the earlier one in New York which was destroyed and the surviving work in Mexico City) during the early years of the Great Depression, so it’s no surprise the struggle between the rich and powerful and the starving masses features so prominently.

In this seminal work, Rivera has compared his own experience as a painter fighting against the tyranny of his wealthy clients to the universal conflicts of political and economic struggle as played out between rich and poor on the world’s stage.

Mexico City offers a feast of Rivera’s larger than life murals and frescoes, but his large-scale works can also be seen in many other cities in Mexico as well as in San Francisco, Detroit and New York in the USA.