Margaret Mead–Bringing Anthropology to the Masses

Never doubt that a small group of thoughtful, committed citizens can change the world; indeed, it’s the only thing that ever has.

I don’t recall the first time I heard Margaret Mead’s name, but it’s quite likely I read it on the pages of National Geographic magazine as a child in the early 1960s. I remember being glued to the television when Mead appeared on The Tonight Show with Johnny Carson. Even at that young age, I recognized that she was different from the other ‘celebrities’ the show normally hosted.

Margaret Mead was an American cultural anthropologist who focused her research on problems of child rearing, personality, and culture. In both her personal and professional lives, Mead was a pioneering and controversial figure.

Her fame was based on her non-academic and easily accessible writing style as well as her desire to share her research in an effort to bring about what she believed would be positive changes in society. Mead’s desire to educate the public about the fundamentals of cultural development as well as her numerous public appearances gave her a platform for expressing her ideas.

Mead as a cultural commentator

Mead’s early research was conducted in Polynesia and New Guinea, and was presented in her books “Coming of Age in Samoa” and “Sex and Temperament in Three Primitive Societies”. Both of these books were quite popular in the USA and discussed how sex and gender roles were established in societies. Her writing at this time also presented evidence that gender roles varied from one culture to another.

Mead, unlike many academics of her day, wasn’t merely writing for her peers. She was interested in public policy and was eager to apply her knowledge in these areas to American culture.

Mead’s research in the South Pacific just after WW2 led her to believe “that cultural patterns of racism, warfare, and environmental exploitation were learned, and that the members of a society could work together to modify their traditions and to construct new institutions.”

These ideas were seen as giving some measure of hope for humanity following two devastating world wars which had caused many world leaders and academics to question the ability of humanity to change its brutal ways.

According to our standards today, Mead would be labeled as a cultural disruptor or influencer. By utilizing the rapidly changing media landscape of her era, Mead’s name (along with that of her friend and daughter’s doctor, Benjamin Spock) became a household word, a first for an anthropologist.

She is often cited as influencing the free love movement of the 1960s as well as the feminist movement of the 1970s. Her views were often derided by conservative leaders of the time and she was even labeled a “a dirty old lady” by some due to her discussions concerning sexual expression at time when such topics were considered taboo in a public forum. 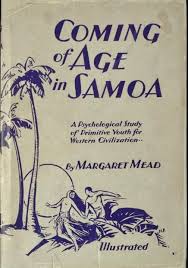 However, in more recent years, her work has been considered ground breaking and she has been widely recognized as a maverick in her field.

In 1979, President Jimmy Carter awarded the Presidential Metal of Freedom posthumously to Mead. The citation read:

Margaret Mead was both a student of civilization and an exemplar of it. To a public of millions, she brought the central insight of cultural anthropology: that varying cultural patterns express an underlying human unity. She mastered her discipline, but she also transcended it. Intrepid, independent, plain spoken, fearless, she remains a model for the young and a teacher from whom all may learn.

The reach of Mead’s work

In 1998, Mead was honored by the US Postal Service based on her contributions to the field of anthropology. Photo Credit: Wiki Photos.

In today’s overcrowded world of celebrity where everyone seems to be screaming ‘look at me’ at the top of their collective lungs, it’s perhaps difficult to imagine Mead, or any other academic in the social sciences, having much of an impact on society.

Revisiting Mead’s life reminds us of the importance of being open to examinations of our own culture as well as the value of learning from other cultures.

For a general overview of Mead’s life, here’s a link to an informative video produced by Clare McDonald.