It’s late spring/early summer in the Northern Hemisphere which means snakes and other reptiles are once again active. This past week, I had multiple encounters with beautiful snakes in my sister’s yard here in North Carolina where I’m visiting. Of course, I do realize not everyone shares my love of nature or my fascination with snakes. Some of you are surely cringing right now at the mere thought of being greeted by a snake outside your door, especially a surprise visit because you had forgotten to be aware of them.

My sisters and I agree (as snake experts recommend) with letting the harmless snakes, such as the Black Racer, have free reign outside because they control rodent populations and actually keep poisonous snakes away from the house. I have some friends who say the only good snake is a dead snake. However, I think those feelings are a result of not fully understanding how snakes fit into the ecosystem. 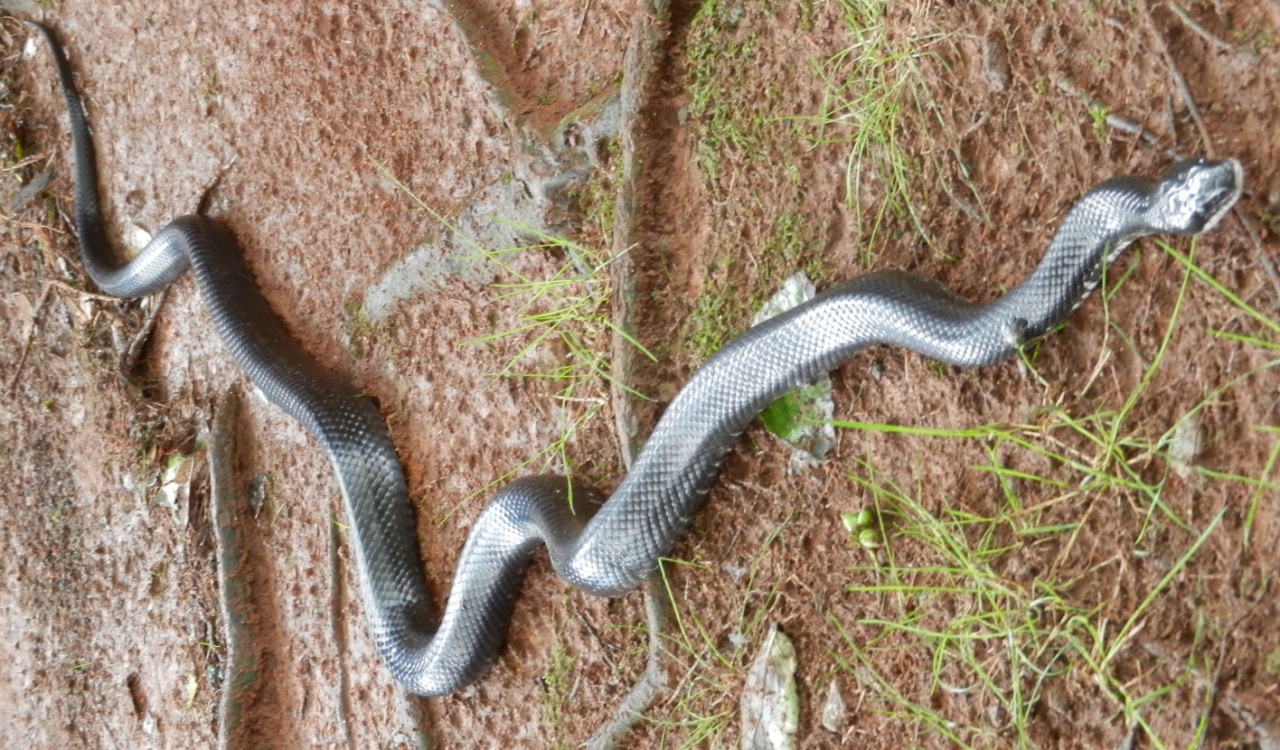 Black Racers, such as this one, are often seen in my sister’s yard in North Carolina. Photo: Henry Lewis

Growing up on a farm in the American South, hot summers and an abundance of trees and grasses rewarded this curious child with plenty of wildlife encounters. The occasional sighting of a fox, as well as the more common sightings of deer, skunks (phew!), possums, raccoons and a variety of snakes and other reptiles, taught me from an early age that humans aren’t the only intelligent and inquisitive creatures on the planet.

Snakes are our friends 🙂

From these encounters, I developed a fascination with snakes, as well as a healthy respect for these shiny, slithering critters. Here’s a simple way of viewing their benefits to humans as part of the ecological chain: small rodents, which are a favorite food of most snake species, can be carriers of flea and tick-borne diseases. Remember the Black Plague from the European Middle Ages and the millions of deaths caused by rodents entering houses where their fleas would bite the residents and infect them with this often-fatal bacteria?

Snakes, which can be both predator and prey, limit the rodent population, and in so doing, become a natural form of disease prevention. Not that being a benefit to humankind should necessarily determine the value of any living organism. 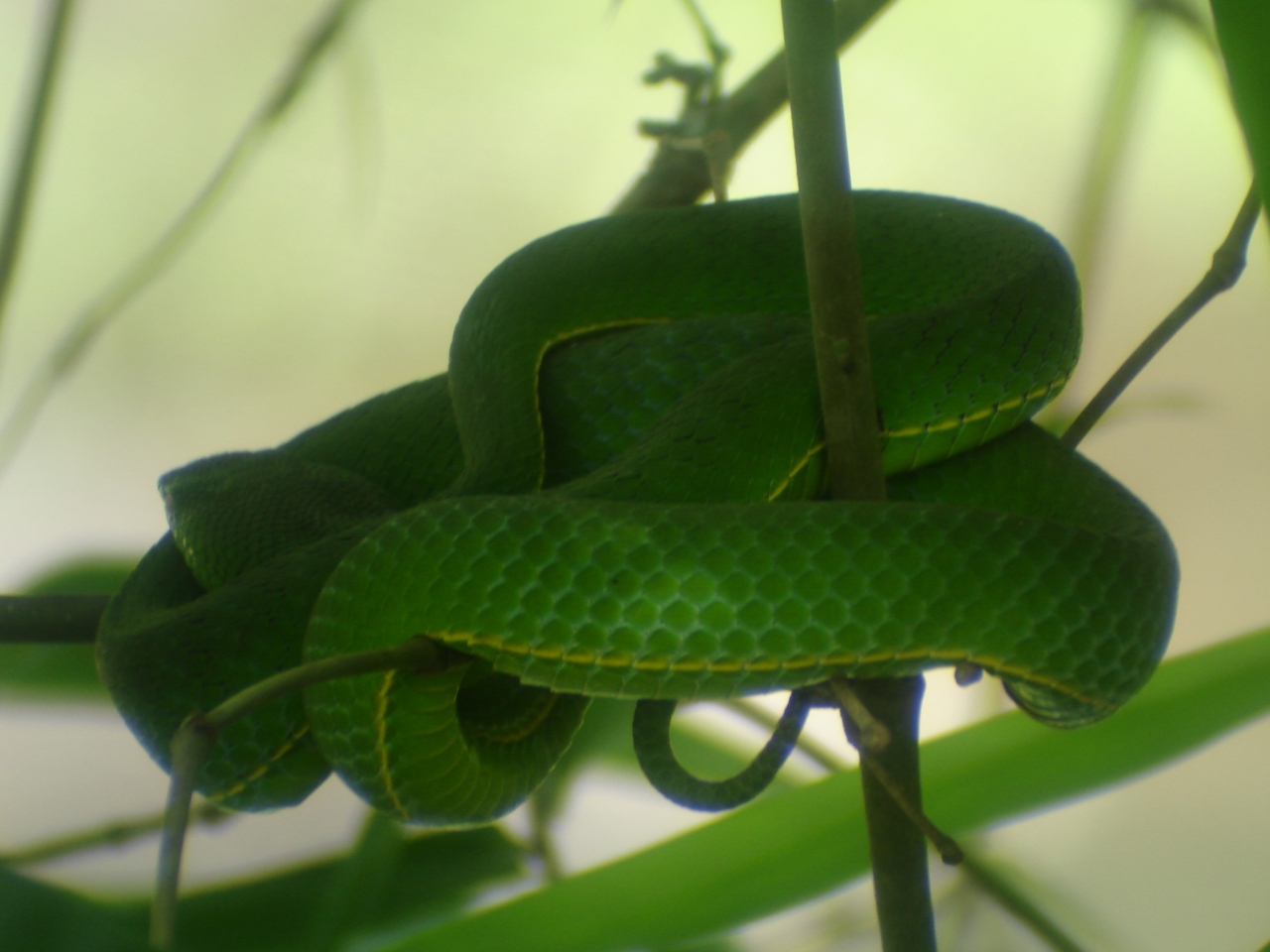 A beautiful green viper camouflaged in plants along a river in Khao Yai National Park in Thailand. Photo: Henry Lewis

Of all the encounters I had with wildlife as a nature-loving child, none were more interesting than the snakes which crossed my path.  And before you ask, NO, I’ve never kept a snake or any other wild animal captive. I’ve always preferred viewing creatures in their natural habitat. While snakes may look adaptable, being reptiles who cannot regulate their own body temperature makes them one of the species most vulnerable to Global Warming.

Since the time of the world’s earliest civilizations, snakes have been afforded a high status as cultural symbols. In regions that spanned much of the Earth, snakes have symbolized fertility and rebirth, guardianship, poison and medicine, vengefulness and vindictiveness. In some cultures, they were recognized as gods themselves, while in others they supported or protected the gods.

In Christianity, the book of Genesis describes the serpent which tempted Adam and Eve into disobeying God’s commandant not to eat the ‘forbidden fruit’ from the ‘tree of life’. To some extent, this Biblical reference featuring a snake as a deceiver or Satan has colored the Western cultural view of snakes, giving them an air of mystery and imbuing them with sinister characteristics.

In the USA, some Pentecostal churches, especially in the Appalachian Mountains region, still handle snakes—known as ‘taking up serpents’–as a show of their faith in God. Honestly, I find this idea ridiculous and quite reckless. There have been cases of serious snake bite and death stemming from this practice.

While snakes have a high cringe factor when discussed in most Western cultures, they’re viewed as a normal, interconnected part of life in South and Southeast Asia where they’ve been both worshiped and feared for thousands of years. When I first traveled around that region, I was surprised to see (huge-to me) Cobras casually coiled in wooden boxes tucked away in the corner of a Mom and Pop shop or restaurant in more rural areas. I’ll admit it was a bit unnerving when I would suddenly notice the box and its contents. 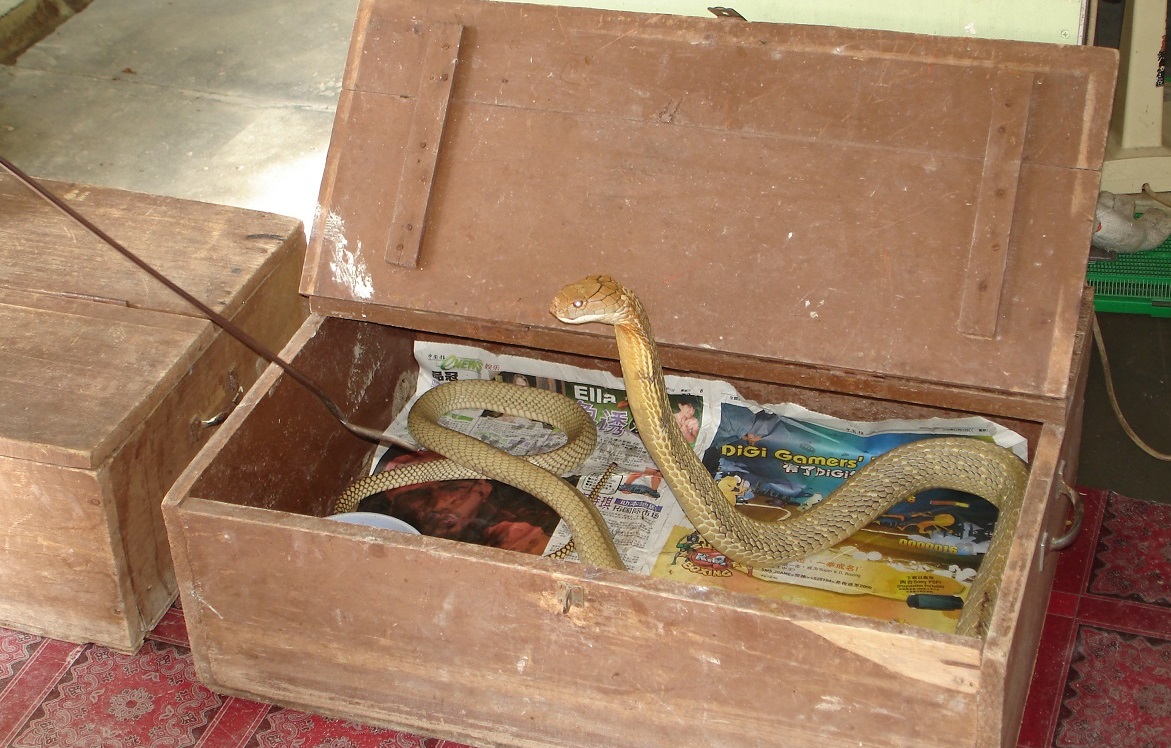 A tan King Cobra in its wooden box home in Malaysia. This one startled me (to put it mildly!) when I turned and saw it only a few feet away from where I was standing. Photo: Henry Lewis

Even if you’ve never traveled in this region of the world, most people have seen images or videos of snake charmers in places such as India and Sri Lanka with a semi-standing cobra (complete with puffed-up hood) swaying gently to the vibrations of the music as it rises above a clay or woven grass pot. These days this tradition is most likely to be witnessed at major tourist attractions.

Many East and Southeast Asians also drink ‘snake wine’ and eat the flesh of snakes since it’s their belief that a snake’s body fluids have unique healing properties, based on the principles of ancient Chinese Medicine.

In many parts of SE Asia, the king cobra, Mucalinda, is honored in Buddhist iconography. These statues show a meditating Gautama Buddha (the historical Buddha) sitting on the lower portion of the coiled serpent’s body while the upper hooded portion forms a sort of umbrella protecting the enlightened Buddha from rain storms and other dangers. 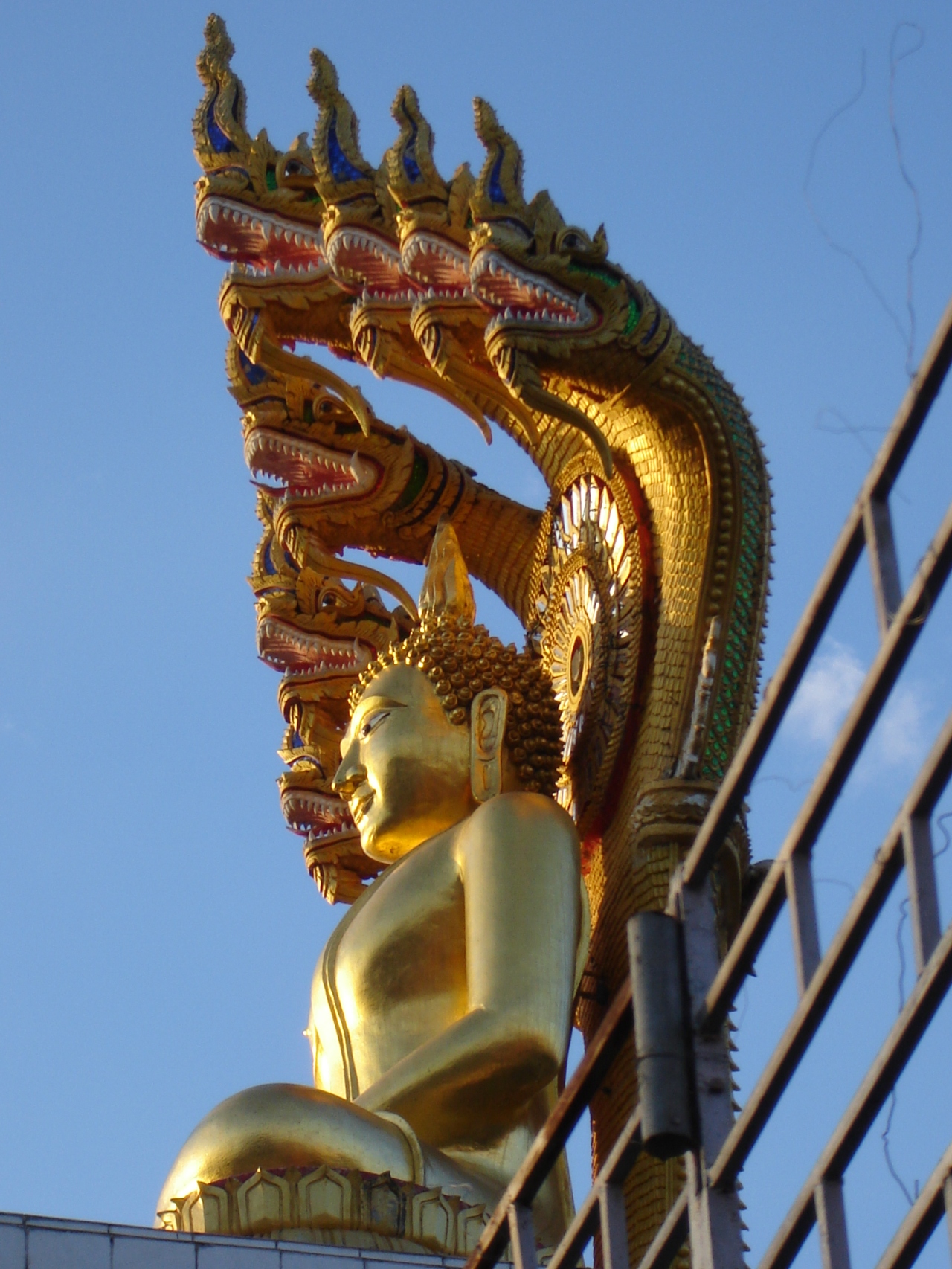 A temple gate in Mae Sai, a northern Thai town on the border with Myanmar. In much of SE Asia, the serpent is  represented with 7 heads. Photo: Henry Lewis

The snake in these sculptural representations is known as a nāga, a Sanskrit word borrowed from Hinduism, one of the world’s most ancient belief systems, which has its roots in present-day  Nepal and India. During the years I lived and traveled in SE Asia, I became very fond of the nāga statues at various Buddhist temples I would visit and even began collecting miniature ones. To me, they represent the unique connection between humans, nature and spirituality. 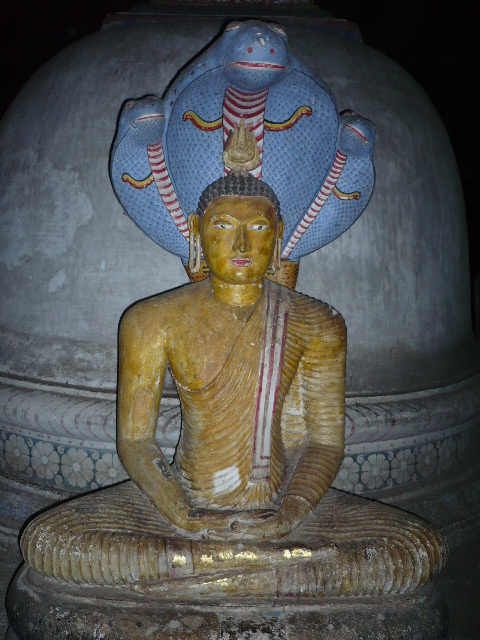 A 3-headed serpent protecting Buddha in one of the caves at the Golden Temple of Dambulla in Sri Lanka, a must-see sight if you visit this beautiful island nation. Photo: Henry Lewis

One of the most curious places I’ve visited with this snake/religion connection was the Snake Temple in Penang, Malaysia. Here, you can see a variety of vipers (rendered non-venomous and mostly green in color) draped from statues, candle sticks and other temple furnishings. Although there is purportedly historical significance involved in allowing these snakes to inhabit the temple, it felt like a gimmick to draw tourists as some of the locals inside offered to take personal photos of tourists holding one of the snakes, for a price of course. I declined. 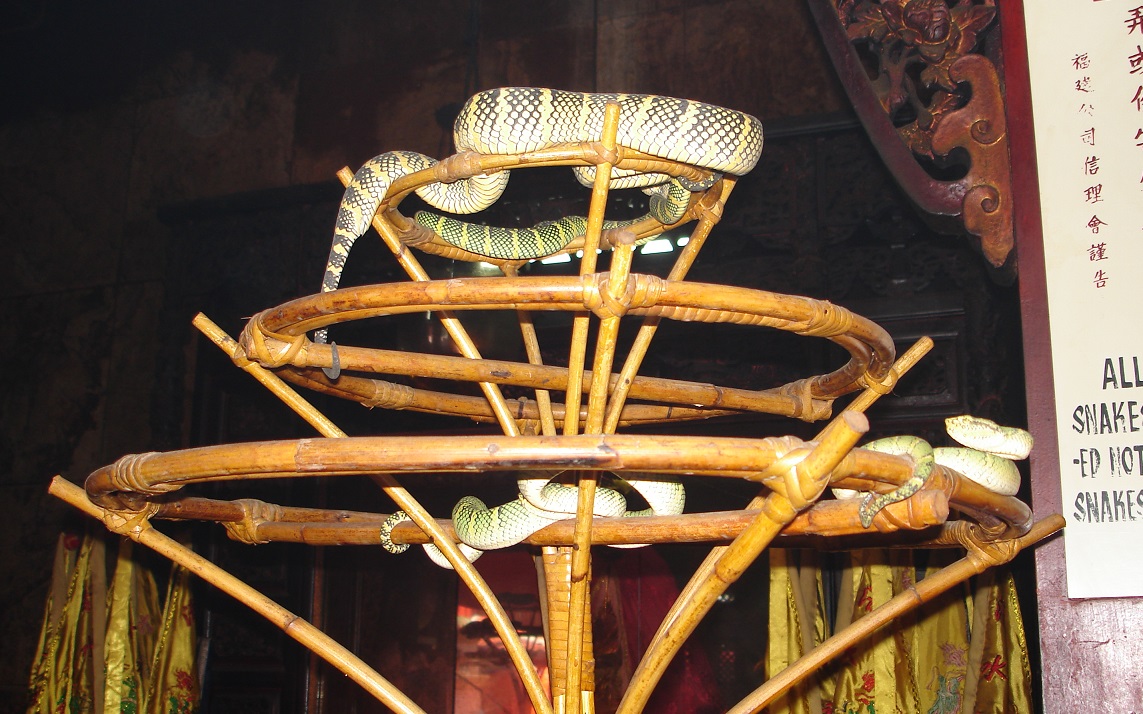 Reliable snake bite statistics, especially in the developing world, may be difficult to establish and accuracy depends on the organization reporting. According to the WHO, 5.4 million people world-wide are estimated to be bitten each year with up to 2.7 million envenomings (venom injected into the victim). Of these, between 81,000 and 138,000 die.

Most snake bite victims are usually poor, live in tropical areas and work in agriculture. India alone accounts for 10% of the world’s total envenomings and deaths.

Rice paddies are a favorite habitat for vipers which lay in wait for a rodent to run along one of the raised paths that usually thread through the wet fields. The problem is that workers also use these paths to pass through the fields setting up a classic opportunity for a bare-foot human to be bitten.

While snakes pose some degree of danger for outdoors-loving humans, the chances of being bitten by a venomous snake are extremely low. Save your fear for driving on the freeway which carries a much higher risk of personal harm.

Finally, if you live in an area populated by snakes, educate yourself and your family about the different varieties and consider allowing the non-venomous ones to roam freely. You, your children and your pets will be happy you did.