I had a dream this week–one of those part whimsical, part terrifying nocturnal romps through the subconscious mind. I’ll warn you, the dreams that I remember the morning after are in vivid color and peppered with detail.

In my dream, I found myself standing in a crowd that had gathered along the fence facing the North Lawn of the White house. Between the fountain and the north portico of the building stood Donald Trump, dressed in full-on matador costume complete with a glowing red cape he held aloft in his tiny right hand.

The North Lawn of the White House with the sidewalk along Pennsylvania Avenue at bottom–the setting for my dream. Photo Credit: Wikipedia

The matador costume, which was created for the purpose of making a matador look virile and masculine, had a clumsy super-hero appearance stretched over Trump’s plump visage. His gut so distended and pushed down the waist of the trousers that they projected the silliness of  Santa costume pants rather than the form-fitting eroticism so popular in Spanish bull fighting lore. He was wearing a matador’s hat and his long orange hair was swept upward in the back to the extent that it looked as if it was imitating a Hawaiian wave worthy of the best surfing skills. Trump wore an air of triumph even before any action began.

Imagination is usually better than trying to dupe an image so here…enjoy imagining Trump dressed this way… Photo Credit: Wikipedia

As I watched, Trump lowered the cape (making it necessary for him to use both tiny hands) and who should suddenly appear from the right side of the frame but Hillary Clinton, dressed in an immaculately tailored shiny (probably silk) black power suit with a red blouse underneath and a curious rope tied around her neck, although worn loosely. Her blond locks were hidden under one of those full face black watch caps that was rolled up to her forehead placing the eye holes in just the right position for her to put her hands inside and extend her index fingers through the holes in an effort to project a childish imitation of a bull’s horns.

Each time Trump lowered the cape, he would also cue Hillary to charge by gesturing with his eyes and a jerk of his head. And, each time right on cue, Clinton would oblige by running directly through and under the red cape before waiting again on the sidelines for her next prompt where she would laugh and chat with the secret service agents surrounding the grounds.

When each pass was completed, Trump would raise both hands in the air and exclaim in a booming voice Mohammed Ali style, “I AM THE GREATEST!” A feverish cheer would rise from the front of the crowd and then echo as it passed through each subsequent row of what I quickly recognized to be full-onTrump supporters that surrounded me.

I continued to watch the spectacle like an amazed child until both Trump and Hillary seemed to tire of the exercise at which time Bill Clinton showed up in a golf cart and escorted Hillary off the lawn. Chelsea, Ivanka, Melania and the other bit players were completely absent from my dream.

When I gave this dream some thought after waking the next day, my first reaction was that I hadn’t felt afraid of the rabid Trump supporters that surrounded me, but perhaps that a sign that as a semi-normal-looking (I love fooling the establishment!) white male, I knew I wasn’t under threat in such a crowd. Sad fact is that I doubt many women or people of color would be able to experience this dream in the same way.

Nor do I need to delve into Freud’s theories of dream analysis, consult a rocket scientist or a channeler of ancient spirits to interpret this dream.

In July 2016, I arrived in the US from the Middle East (on my annual leave) via the Philadelphia airport during the week when the Democratic National Convention was being held in town. Life and work in the Middle East had provided a buffer from the hyper-commercialization of the US Presidential election so I suppose I was caught unaware.

My onward flight had mechanical problems and was cancelled so many passengers (including moi) were forced to sleep on the floor of the airport that night because the airline couldn’t find available hotel rooms anywhere in the Philly metro area. As a hard-core insomniac even in the best of circumstances, I had lots of time to wander the empty concourses in the wee hours of the morning and gaze through the windows of the closed shops. 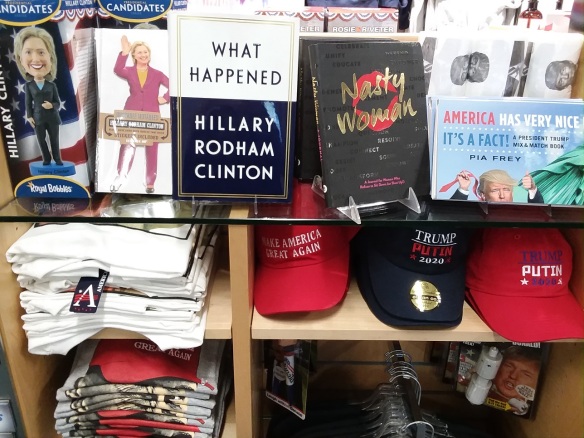 Kiosk in the United Airlines terminal at Washington-Dulles International Airport.

In every other shop window on every concourse, there was a display of books either written by or about one of the candidates, along with all manner of plastic 2016 election collectibles. Examining these newly minted cultural artifacts made me realize that the Donald vs. Hillary show was in full swing. Trump had been reluctantly accepted as the Republican nominee the week before and Hillary had been anointed by the DNC long before their convention began.

Following a long, cold night on the hard floor, (the airport ACs must have been set to a subzero factor), I didn’t feel very charitable toward the DNC or the airport. But the rest is history as they say—Trump went on to shock the world (and the pollsters) with his win in the Electoral College, and Hilary went on to write the inevitable book about ‘what happened’ and how she was dealing with the results.

Fast forward to May 2018 (my most recent return to the USA) and my flight from Washington, DC to Seattle this past week. Imagine my surprise (and disgust) at seeing very similar kiosks still offering Hillary’s books on one side and Trump paraphernalia from coffee mugs to T-shirts on the other. With jaw partially dropped, I wondered aloud: Would these kiosks be taking up valuable retail space if the American public wasn’t still thrashing out the details from the 2016 election 16 months later?

Trump merchandise for sale at a kiosk in Dulles Intl., Washington, DC

And the even bigger question begs an answer: With so many important battles to be fought over policy changes from immigration to clean air, shouldn’t American citizens be focusing their energies on what’s taking place in the White House and halls of congress on a daily basis rather than being swept up in all the distraction? Hadn’t I been told by multiple friends and family members that they no longer wanted to hear, read or think about any aspect of the 2016 election?

So, who’s responsible for the continuing circus?

Surely, much of the credit (uh, hum) for the continuing debate can be chalked up to Donald Trump’s ‘in your face’ style of endless self-promotion. Indeed, Trump never misses an opportunity to remind anyone and everyone willing to listen (or follow his Twitter feed) of the ‘mandate’ he received from the Electoral College. Well, not quite Mr. President, but those details are fodder for another post.

According to writer Julia Azari, “Trump’s idiosyncrasies are surely part of the story. But also, defining the meaning of an election gains special relevance when the legitimacy of the presidency, and the political system in general, is in question — even, possibly, for the president himself.”

With the ever-looming threat of dethronement, Trump seems desperate to create as many diversions as possible, like a magician (although not a very good one) who fools the eyes of the audience with his sleight of hand. Certainly, he can’t simply rest on the ratings of his current reality TV series which unfolds daily in the Oval Office. And so, the election drama continues to be replayed on the White House Channel as well as (possibly) at an airport kiosk near you.

For a synopsis of Trump’s achievements so far, check out this blogger’s witty post, “Just Can’t Quit Hilary.”

More products for sale at a kiosk at Dulles Intl in Washington, DC

Surely the DNC must accept its share of blame for the outcome of the 2016 election, as well as the 40% of Americans who didn’t vote for a presidential candidate. Hillary, of course, is not a victim as some have asserted and I didn’t view her that way in my dream. Rather she was a willing participant in a show partially created and funded by her and the corrupt corporate DNC (just as the equally corrupt corporate RNC).

The real victims of all this deception and commercial distraction have been (and continue to be) the American public. As someone who worked on film sets for 16 years and has seen poor quality, bloated productions before, I’m hopeful American citizens will demand that  the plug be pulled on this show which has gone far over budget and WAY over schedule.