Labor in the Arabian Gulf–Part 3

The future of the citizen workforce

As teachers charged with preparing young adults to become productive members of their society, it was important for my colleagues and I to first understand the peculiarities of the Gulf labor market. We were informed by periodic seminars and workshops, conversations with industry representatives and recent graduates as well as through personal research projects.

While Oman’s wise Sultan’s plan has long been to train Omanis for white-collar jobs in education, business management and the STEM industries, the reality was that in many instances this was a long-range goal. Maintaining expat labor in supervisory and management positions was key to keeping the economy humming in the near-term. What I clearly heard from my students was that they weren’t interested in being part of the blue-collar workforce. They wanted a job, preferably with the government, that came complete with their own desk, computer and a sufficient salary. 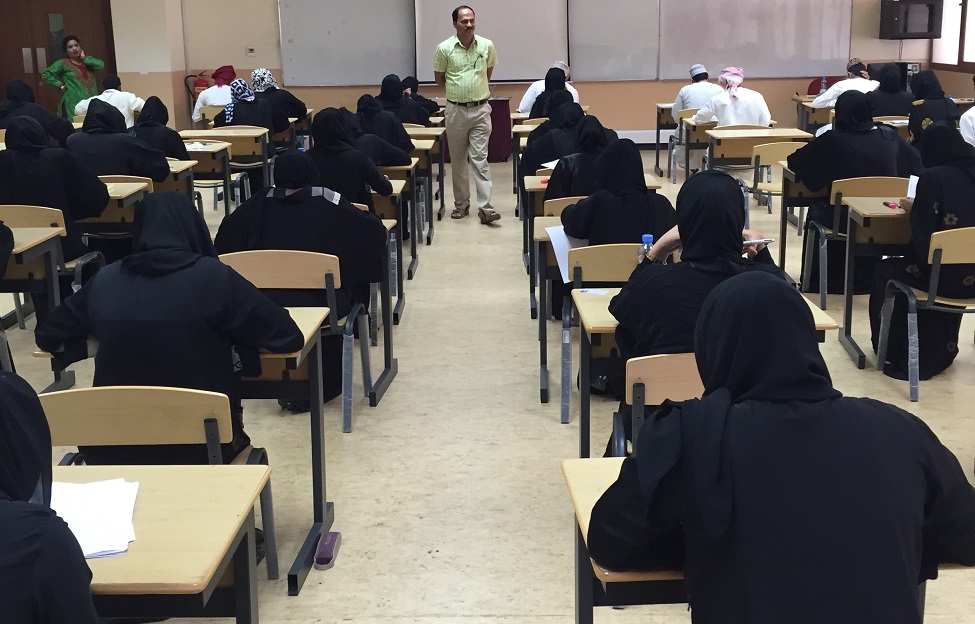 Students taking an exam at one of Oman’s major universities. The percentage of females studying is considerably higher than males at many of the Sultanate’s universities.

In my students’ minds, a government job would grant them employment for life, a good salary, lots of time off and flexibility to interact with their families at will. In contrast, they believed a position in a private company would require them to adhere to a rigid schedule with longer work hours and less vacation time as well as offering a lower level of security against termination. Since the vast majority of their fathers and brothers, along with their mothers and sisters who were employed outside the home, usually worked for either the Royal Oman Police, a branch of the country’s military, a government ministry, government-funded educational institution or in some other government-controlled capacity, it was perfectly reasonable for my students to believe the same pattern would continue.

Because it’s such an integral part of the way things work in the Gulf, ‘wasta‘ was one of the first Arabic words I learned after moving to Oman. My male students would often cite their lack of wasta as the reason their marks weren’t higher or for their family’s lower financial status. I quickly came to realize that few decisions were made within Arabian Gulf culture that hadn’t been tainted by the stink of wasta.

Basically, wasta is the influence or status within the culture wielded by an individual or family. It’s incredibly important when looking for a job since the best positions are often reserved for those from powerful families with lots of influence. It’s difficult to distinguish it from other terms (such as nepotism) we use to describe a corrupt system where the prize goes to the person with connections rather than the person with the highest qualifications as in a merit-based system. It’s a form of corruption that the Sultan’s government has sought to eliminate with what I would judge to be limited success.

A close Omani friend who worked for one of the ministries in the capital, Muscat, told me about his brother’s experience at a job interview. He said 67 candidates were invited to come for an interview to fill 15 positions at a regional governerate headquarters. When they were all gathered on the day of the interview, 15 names were called and those individuals were escorted into a back office while all the others were dismissed without any explanation. Since most Omanis are either blood relatives or have other close connections, word spreads quickly. My friend was very upset that the hiring decisions had been made based on wasta far in advance of the interview day. The other potential job candidates had merely been window dressing to make the process appear transparent to the general public.

A graduation ceremony at Sohar University where I taught during my last four years in Oman. Tents are used for many major events, both by institutions (as seen here) and by families for gatherings such a weddings. Omanis sure know how to make a tent look elegant!

Being an integral part of Arabian Gulf culture, there are many anecdotes (often humorous) highlighting specific instances where wasta has been used. There are even videos on YouTube explaining the topic. On the serious side, however, I found many of my students to be unmotivated in their studies because they believed their lack of wasta would doom them to a low-paying, unfulfilling job regardless of their level of intelligence and hard work. Based on my experience teaching employed Omani adults in night classes–including one particularly clueless bank manager who had surely used his family’s wasta to get his position–it was difficult for me to argue against their view that wasta might have a negative effect on their future job prospects. Even so, I always gave it my best effort.

What does a foreign teacher know?

I often told my students that they had an unrealistic view of their future employment options given the fact that many of the world’s countries were seeking to institute policies that would ween their economies off a dependence on fossil fuels, as well as the fact that Oman—unlike many of its richer Gulf cousins–had limited oil and gas reserves. After the crash of oil prices in 2014 and as a Business English lecturer, I felt it was an important part of my teaching mission to give my students the straight scoop—that the economic clock was ticking and the days were numbered when they could expect their government to provide all college-educated citizens with a coveted white-collar job.

I remember repeatedly asking groups of students if they thought it was important for them to replace migrant workers (including their teachers) with Omanis which would give them more control over the way the country’s systems worked. They would always smile and nod in agreement. But when I’d ask how many students would be interested in working as a mechanic, plumber or electrician, no one would raise their hand.

This is when I’d spring the “do you realize that in other wealthy countries those blue-collar occupations make much higher salaries than teachers,” line on them. The eyes of the students who were still awake at this point would get really big as they’d “Ooh” and “Ahh” in disbelief. Yes, really, I DID give that lecture multiple times, but of course many of my students would just roll their eyes and I knew they were thinking, “He’s a foreigner, what does he know?”

Auspicious Omani men dressed formally–with kanjar (traditional Omani dagger) and asa (camel stick)–on the front row of a university graduation ceremony. Quite a male affair as you can see, despite the female dressed in a black abaya, in the center of the photo.

Mainly due to pressure from NGOs such as Human Rights Watch and coverage by international media, many of the Gulf states are taking steps toward creating fairer and safer working conditions for their large migrant labor populations. Worker abuses in the State of Qatar–where around 90% of the country’s 2.5 million population is made up of migrant laborers–have dominated headlines over the past few years as that small, but extremely wealthy, country continues developing the infrastructure needed to host the 2022 FIFA World Cup. Being in the international spotlight has forced Qatar to undergo structural reforms of the kafala system and create basic job protections for the workers building the stadiums, hotels and other World Cup facilities.

The changes being made to worker’s rights in Qatar has had the effect of filtering down to the other states in the Gulf, because all, except Yemen, are members of the Gulf Cooperation Council (GCC). One function of this intergovernmental organization is to maintain a balance regarding competitive advantage within its member states. In turn, reforms in Qatar have pushed other Gulf states to make similar changes to their own labors laws.

Despite the often miserable working and living conditions many Arabian Gulf workers endure, some of them readily expressed gratitude that a foreign country was providing work opportunities which didn’t exist in the isolated rural villages of their home countries. I spoke with many of these laborers who told me that their wages, though minimal, were responsible for buying rice to feed an entire family back at home in India or Bangladesh. Such attitudes poignantly illustrate the great divide between Western life experiences and personal perspective and that of many of the world’s poorest populations.

During my years in Oman, whenever I began to feel discontented or sorry for myself, all I had to do was look out my office window at the laborers scurrying about outside and my attitude was quickly adjusted. Let’s be grateful each day for the good fortune we’ve been granted and work to see that others are afforded the same choices we’ve been given in life.