For many of us, international travel is laced with the anticipation of encountering and interacting with cultures that are very different from our own. We relish the sights, sounds and smells of an exotic world, but most of all we delight in the experiences we share with the locals within these cultures.

At a time when the world of international travel has been completely upended by the coronavirus pandemic, our journeys have become limited to virtual travel sessions and reminiscing while reviewing photos and notes from past adventures.

While settling for dreams of future journeys might feel inconvenient for us — the ones who’ve been privileged to have such past experiences — it’s important to recognize what’s happening to the tourism dependent locals who once welcomed us. After a year of quarantines and border closures, tourism dependent communities all across the globe have been financially devastated.

This hiatus is a good time to reflect on the impacts — both positive and negative — that mass tourism has on the lives and livelihoods of the locals in popular global destinations.

One group that has been critically affected by the travel restrictions associated with the pandemic are the Maasai, a well-known pastoral people of East Africa who are currently struggling under the weight of multiple crises. 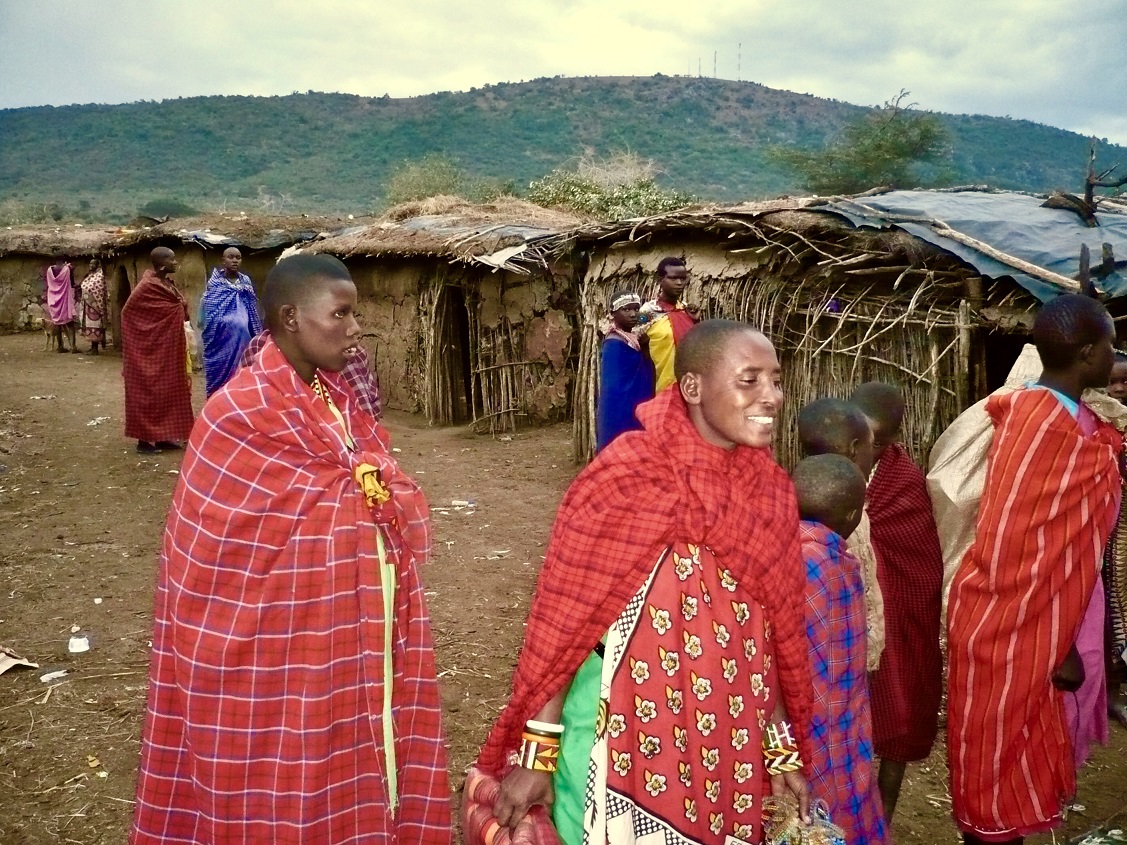 Context and Brief History of the Maasai

The indigenous Maasai live primarily in the grasslands of northern, central and southern Kenya and northern Tanzania. For centuries they have been a pastoral culture whose traditions and livelihood have been based on raising livestock, particularly cattle.

All the Maasai lands were shared until the British — who controlled this area of East Africa from the late 1800s until the early 1960s — introduced the concept of private land ownership which was eventually enforced by the government of Kenya.

In addition to land parcellation and private development, the traditional pastoral lifestyles of the Maasai were further marginalized by the creation of a number of wildlife reserves and national parks — the Maasai Mara, Serengeti and Ngorongoro being the most popular — where some of the world’s greatest wildlife migrations take place.

According to the Maasai Association, “The new land management system of individual ranches has economically polarized our people; some Maasai, as well as outside wealthy individuals, have substantially increased their wealth at the expense of others.”

Despite being a major tourist draw and generator of revenue for the Kenyan government, the establishment of the many national parks and reserves on Maasai land has severely restricted access to critical water sources and pasture for livestock grazing.

Maasai men herding their cattle along a busy highway on the outskirts of the capital Nairobi. Due to loss of land to government-controlled wildlife parks, the Maasai must often move cattle long distances in search of grazing pastures. Photo: Henry Lewis.

These land use changes have restricted the size of livestock herds — once the Maasai’s largest source of income — and in many cases have created poverty and hunger among these once proudly self-sufficient people.

Such changes to the traditional way of life forced the Maasai to become more dependent on tourism in order to buy food and other necessities they could no longer produce for themselves. 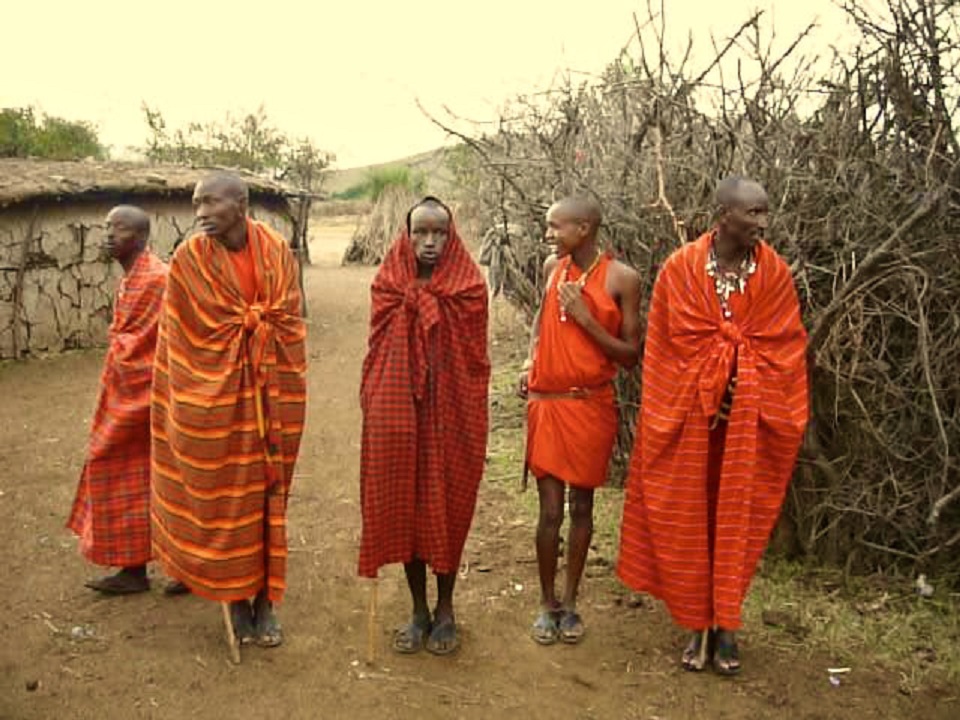 Maasai men (warriors) preparing to dance for our small group during our visit to their village. Photo: Henry Lewis

These Maasai warriors are performing a traditional dance known as “adumu” which can be translated as ‘to jump up and down.’

The Pandemic’s Toll on the Economy

The coronavirus pandemic has only deepened the plight of the Maasai, leading to a dramatic loss in tourist revenue.

Government statistics provided to CNN by Najib Balala, Kenya’s Minister of Tourism and Wildlife, poignantly frame the dilemma.  During the peak season month of August, the Maasai Mara welcomes approximately 250,000 international tourists, but in August 2020, the Kenyan government only registered 15,000 visitors to the wildlife reserve. 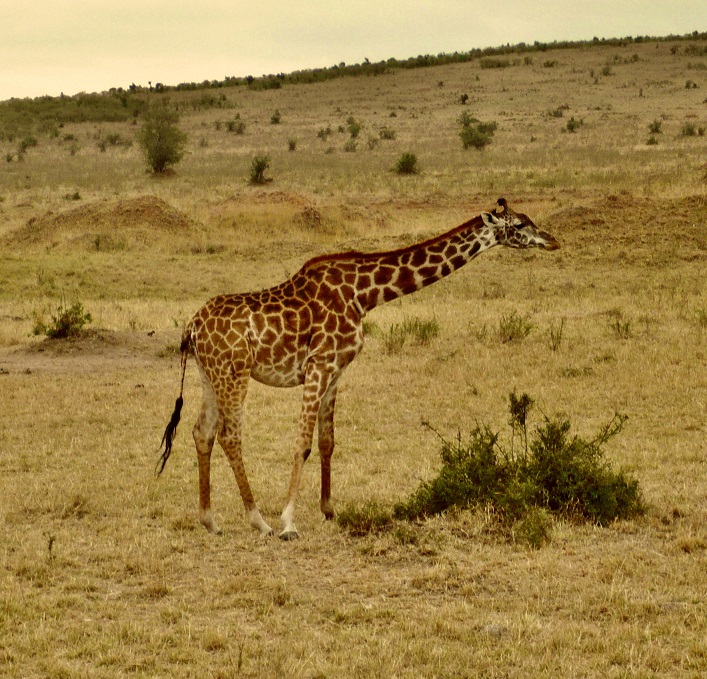 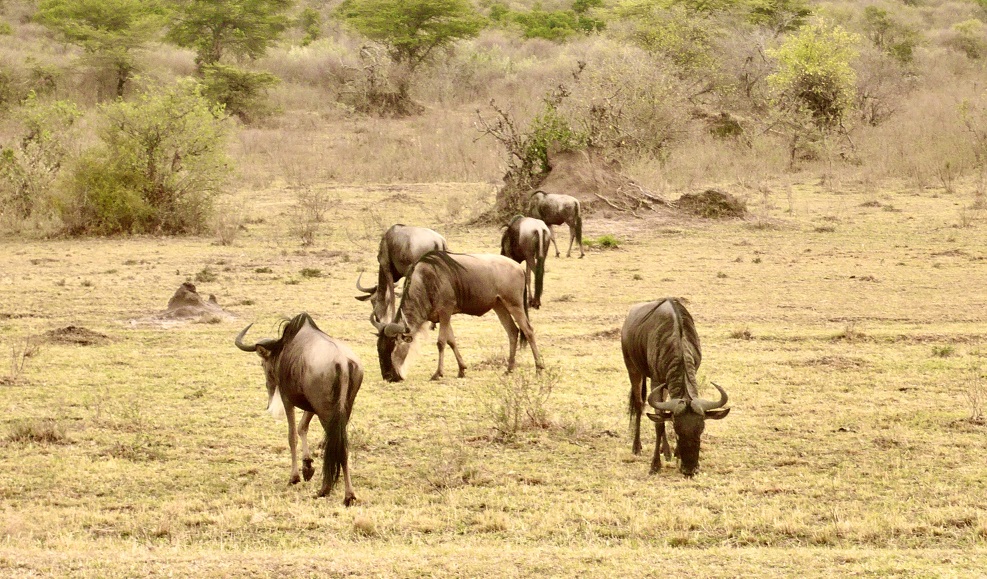 Cheetahs can be seen in abundance in Kenya’s Maasai Mara and often will sleep in close proximity to tourist vehicles, seemingly indifferent to humans furiously snapping photos. Photo: Henry Lewis. 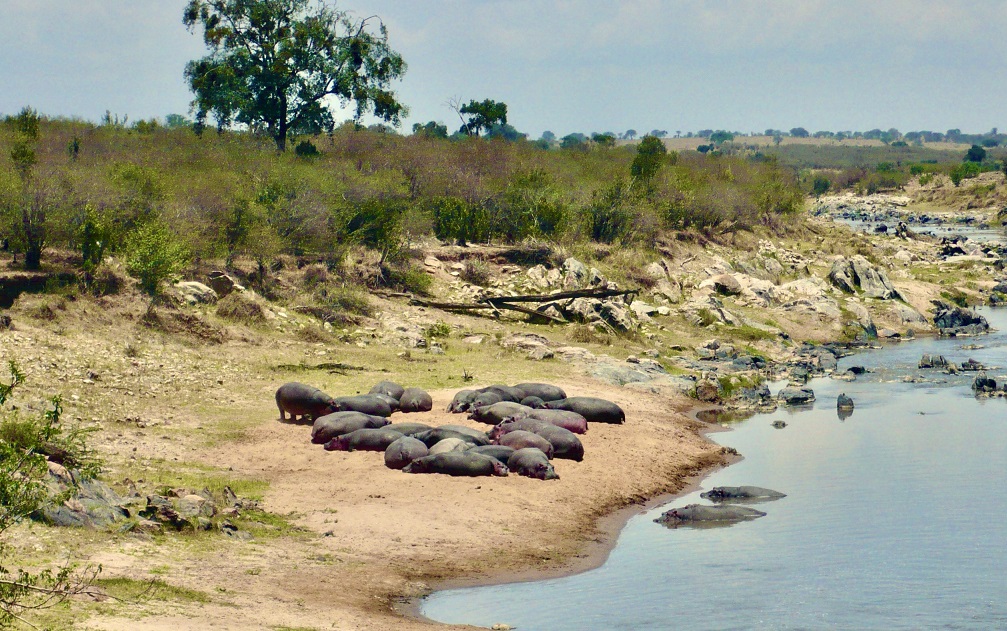 Hippos resting along the banks of the Mara River which forms the border between Kenya and Tanzania. Photo: Henry Lewis.

Hippos enjoying the water of the Mara River which forms the border between Kanya’s Maasai Mara and Tanzania’s Serengeti. Photo: Henry Lewis.

The dramatic drop in international visitors is a major threat to 2.5 million Kenyan tourist jobs, and a particular threat to the livelihoods of the Maasai who welcome tour groups to their villages in exchange for a fee, along with offering their beautiful hand-made crafts for sale.

On Safari in Kenya’s Maasai Mara

In 2009, I was fortunate to be able to go on safari in the Maasai Mara, a magical place where one of the world’s greatest wildlife migrations takes place each year between June and November. This annual migration, along with the hordes of tourists it brings, is shared with Tanzania’s Serengeti National Park which is divided solely by the two countries’ invisible border. 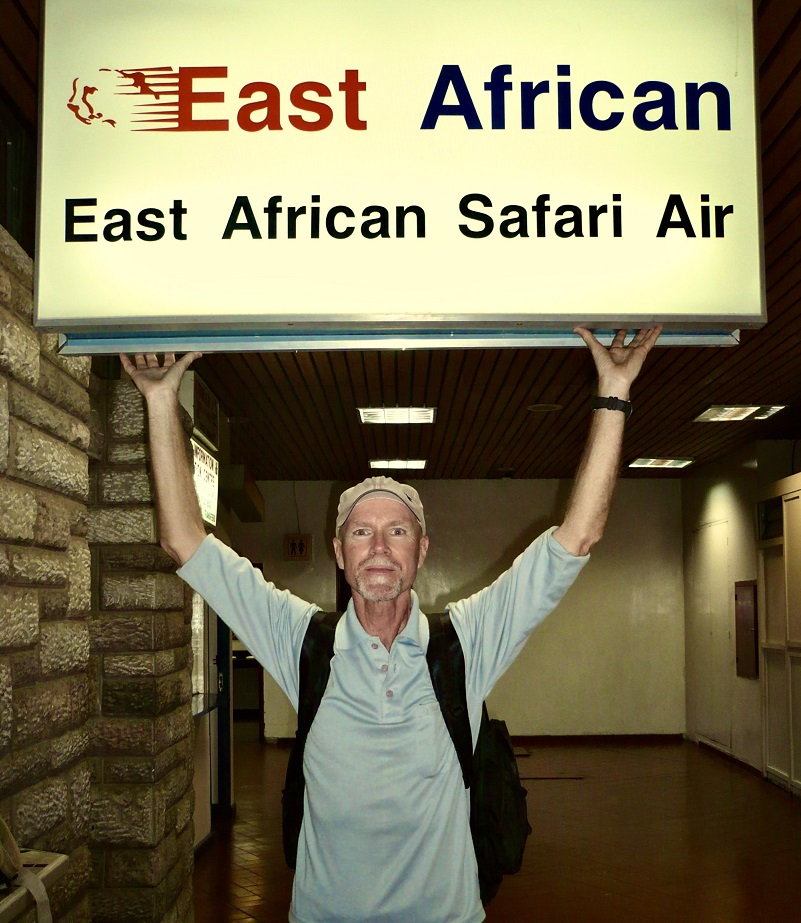 A particularly self-indulgent photo of the author waiting for departure from Nairobi’s Jomo Kenyatta International Airport.

As I always do prior to planning travel, I pored over any ethical concerns and read widely about the experiences of others. This is the same little voice in my head that has prevented me from doing overnight stays in countries such as Myanmar where it can be difficult to find airlines and hotels that aren’t controlled by — and therefore contribute to — that country’s repressive military government.

In the case of visiting the Maasai Mara, I was planning the trip with two colleagues, one of which had previously used an Africa-based travel agency who he assured us was dedicated to contributing in positive ways to the indigenous Maasai communities who inhabit the area where we would be traveling. I was also comforted by the fact that our vacation from the Omani university where we all taught was taking place in October near the end of the wildlife migration period.

The trip timing would be a trade-off . We would be witnessing smaller herds of big African game, but without the huge numbers of tourists traveling in those pop-top safari vans that otherwise might block the view. As a general rule, I always choose to travel during the off-season if possible when local merchants are in need of tourist revenue and a destination is less affected by the sheer number of visitors.

In addition to the thrill of seeing many African animals in the wild for the first time, we (a group of four plus our local guide) visited two different Maasai villages on different days. We were welcomed with traditional songs and dance and spent some time inside a villager’s house, built in the traditional way using wooden poles plastered with mud and cow dung, a tribute to the Maasai dependence on livestock for food and even shelter. 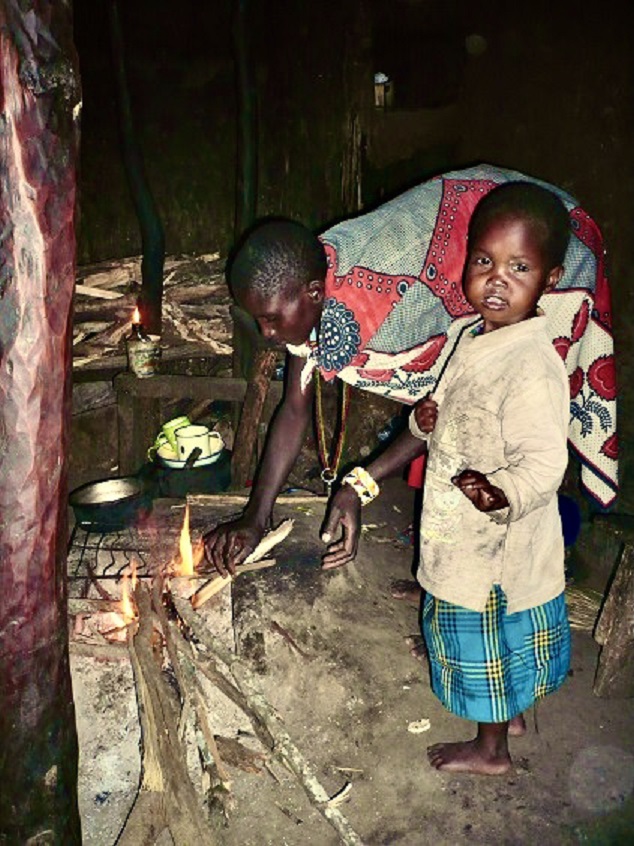 A Maasai woman prepares the wood for cooking inside her house while a child watches the photographer. Photo: Henry Lewis.

We bought some of their hand-made crafts, thanked the villagers and headed on our way. I must admit the visit to the village made me feel uncomfortable, like a continuing form of Colonialism. Here we were, a group of white Westerners playing voyeur in a poor African village.

This is one of the travel conflicts that often arises from the vast inequality between those fortunate enough to be able to afford to travel internationally and those who work in the local tourist industry. This conundrum, of course, raises many ethical issues, some of which I’ve addressed in previous posts.

We had been told by the tour company in advance to each bring some school supplies, a commodity greatly needed by the local rural schools. On our last day of the safari, we ventured to a local school and gave our selection of notebooks, pens, pencils and other articles to the local teacher, a young Maasai man who had returned from the city to help improve the level of education provided for children from the surrounding villages.

In his view, education held the key to the future of his people, one that would seek to preserve many of the traditions while at the same time provide the skills necessary for survival in such a rapidly changing world.

Perhaps over time, being less dependent on tourist dollars will make these Maasai communities more resilient and create more diverse job offerings for the youth.

At least in the short term, we may see more Maasai moving to the cities in search of work while leaving behind their ancestral customs and close connection to the land.

In this case, we all lose as the world’s cultural diversity becomes ever more diluted.

[Note: African safaris can range in price from around US $70 per person/per day to as much as $1500 per person/day, so there’s a price range to accommodate budget travelers as well as those who want to sleep and dine in luxury. Our safari was in the lower range, but comfortable enough for me. We tried to be as liberal as possible in our spending with all the local vendors, the people that might otherwise be left out. In addition, tips are customary for tourist guides and others who help in any way. I always tip those we rarely see — such as hotel maids — who provide a valuable service but are often paid extremely low wages for their labor.]

And one more bit of advice. Before going on a safari, invest in a decent camera for Pete’s sake. I didn’t and the results are evident. 🙂