Ex-Votos: Art as Gratitude and Healing

A work of art can take many forms and be produced for a variety of purposes. Some artists create solely based on their inner passion and fundamental need to express themselves, while others may hope their work gains a degree of public recognition and helps to pay the bills. An audience may view a work of art as a thing of beauty, a social commentary or as a commodity to be bought and sold.

Beneath such overt visual interpretations, some forms of art represent devotion to a spiritual dimension and may also serve as a form of healing therapy. One example of such an art form can be found in the cultural and religious significance attached to ex-votos, small narrative paintings created to express gratitude to a saint who has provided relief from an accident, illness, mental anguish or financial ruin.

On the 10th of April La Internacional burnt down, and there, by accident was Albino Alviso. And being at the point of dying, he humbly prayed to Señor del Hospital (literally ‘Lord of the Hospital’ and depicted in the upper left) and to Our Lady of Guadalupe (barely visible in the upper right corner) to deliver him from danger, and being saved, he is now grateful. Gelaya, May 16th 19?

The composition of an ex-voto can be divided into three parts:

While ex-votos were painted to represent actual traumatic events in an individual’s life, some of the creators found ways to add an element of humor along with the drama and devotion. Note the figure in the well in the ex-voto below.

Señora Carmen Elena commended her son to San Antonio de Padua de la Sauceda, when having fallen into a well, He delivered him from danger, and as an expression of gratitude, she dedicates the present retablo (altarpiece).

Generally painted on sheets of metal or wood, ex-votos became popular in 16th century Italy and soon spread to other European countries where Catholicism was dominant. From there, their popularity spread to New Spain (Latin America) where the tradition continued, particularly in certain parish churches in Mexico.

The painting style used in creating an ex-voto is primitive and the language used in the inscriptions is often that of commoners. Many of these narrative paintings are anonymous, while others are believed to have been produced by painters who specifically offered their services near a main church.

Once completed, an ex-voto – filled with dramatic details and personal feelings – would be placed on the wall of a shrine within a chapel or church. In this way, the individual would publicly demonstrate their gratitude to a given saint or martyr who had protected them during a time of great need. 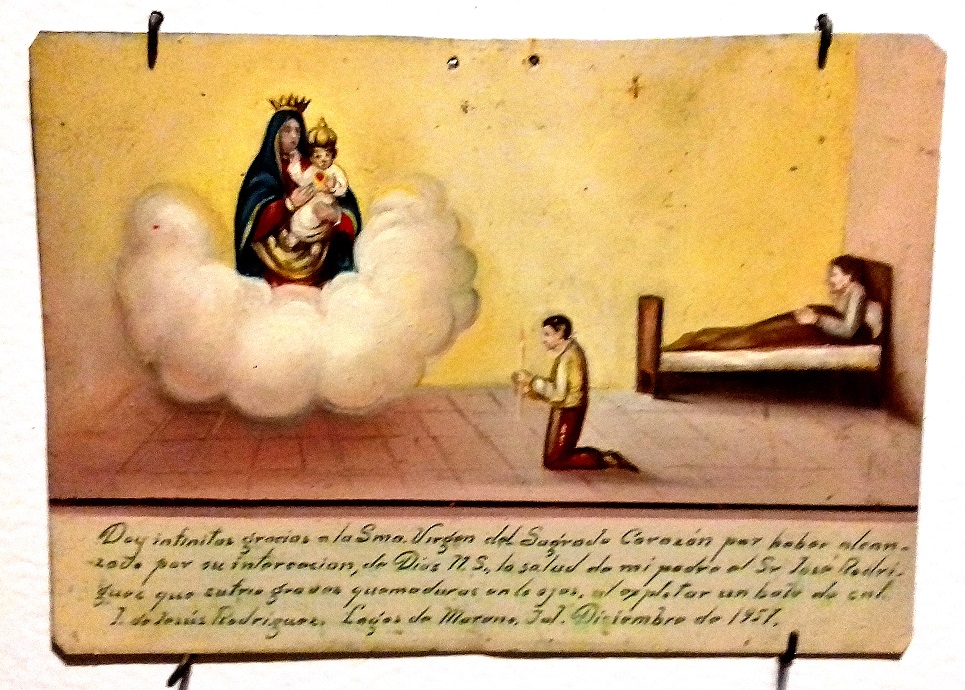 Infinite gratitude to the Holy Virgen of the Sacred Heart, for having obtained, thanks to Her intercession with Our Lord, the health of my father, Sr. José Rodríguez who suffered from serious eye burns, when a barrel of lime exploded. I. de Jesús Rodríguez. Laçíos de Marano, Jal. December, 1951.

Gratitude to Señor del Hospital (Lord of the Hospital), for He blessed me with a miracle during the two operations I went through from the 11th to the 18th of February, 1960, which were successful. José Mosqueda Páramo. México D. Fe. 1960.

This retablo (altarpiece) is a testimony of gratefulness and devotion to San Ramón Nonato and the Blessed Virgen de San Juan, for the critical operation that Sra. Lucina Barros underwent, during which she was commended to Them by her relatives and her friend Marisa Aguilar, who dedicate it to Him. August, 19?

I dedicate the present retablo (altarpiece) to Señor de la Salud de Salamanca, as a token of gratitude for the graces granted. Jesús Murillo. León Cito.

In Zacatecas On the 20th of May 1849, the artilleryman Cleto Delgado, having finished his exercises, was putting the piece back in its place when it hit the frame door; and trying to hold it, his right arm was torn apart. At the hospital, they wanted to amputate his arm, which he thought was not good, so he went to his house where he suffered for eight months, after which time he was … fine..

Blessed Virgin of Guadalupe. You delivered me from that woman, that taking me for someone else, wanted to get me off the train, pushing me and ill-treating me. I put myself into Your hands and could get away safe and sound. That’s why as a token of my gratitude I dedicate this retablo (altarpiece). Maxima Zuztaita. Armadillo de los Inpante, January 1962. 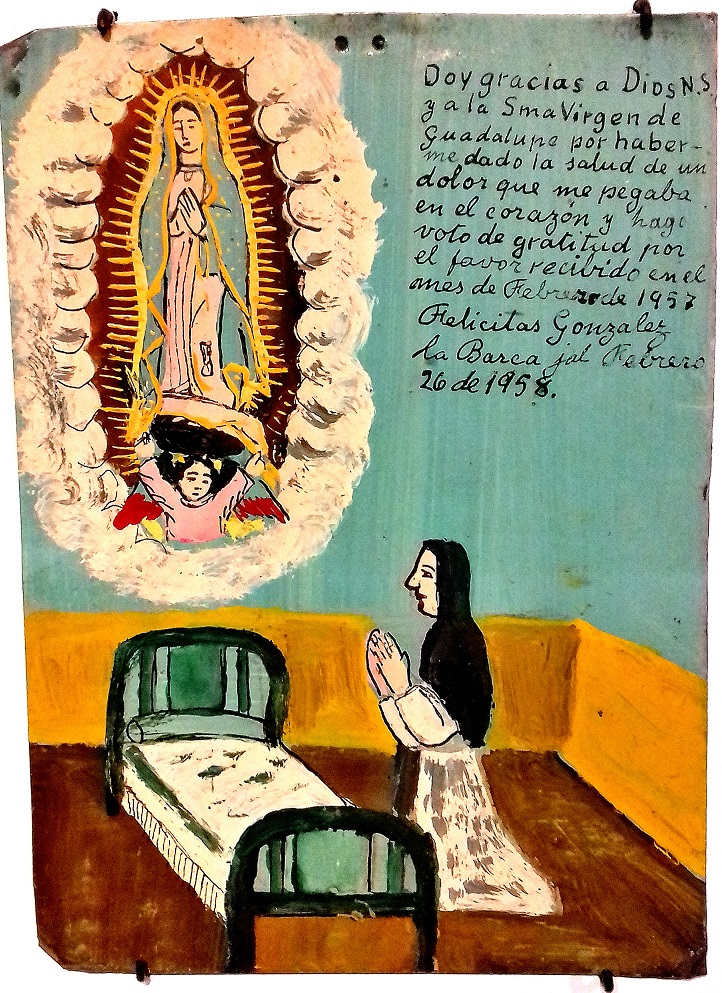 I am grateful to God our Lord and to the Blessed Virgin of Guadalupe for having delivered me from a heart ache, and I make vows of gratitude for the graces received during the month of February 1957. Felicitas González. La Barca, Jal. February 26th, 1958.

♦ Special thanks to Dr. Martha Pulido for her translation of the (often scratched and faded) inscriptions.

All the photos were taken by Henry Lewis at the Amparo Museum in the historic center of Puebla, Mexico.