Start Here >>> Relax with a bit of Miles Davis as you browse……..

Emerging from my hotel on a cold January morning, I braced myself against the breeze as I closed my jacket and adjusted the wool scarf wrapped tightly around my neck. I certainly wasn’t going to allow winter’s chill to slow my pace of exploration. After all, I felt it was far better to brave the elements of a Czech winter than face the tourist hoards that predictably descended in summer on Prague, the much-hyped former capital of the Kingdom of Bohemia and home to a golden string of Holy Roman Emperors. 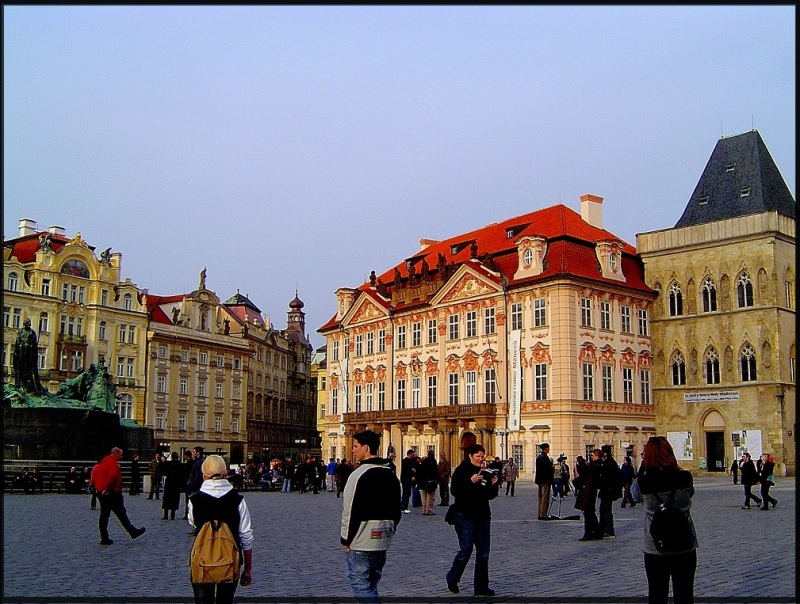 The twin towers of the imposing Church of Our Lady Before Tyn dominate this view of Old Town Square. Photo: Henry Lewis 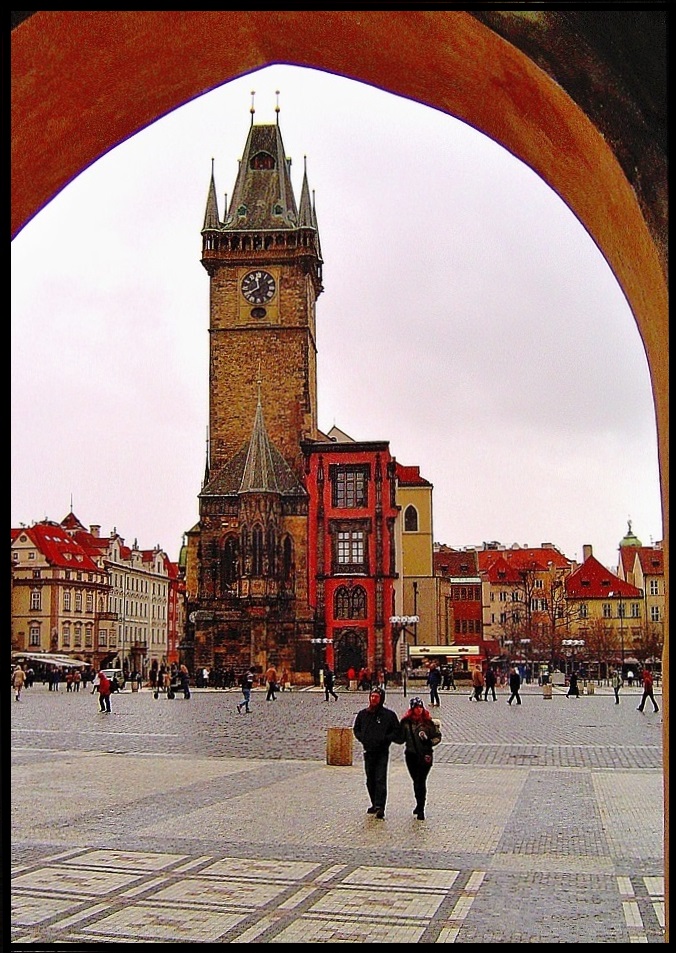 Fact is, I’d heard so much about the city’s wealth of meticulously-rendered architecture and rich cultural history that I’d prepared myself for disappointment. In reality, the opposite was true. Wandering around the colorful streets at the heart of the city, I felt like a child viewing their first Disney movie. 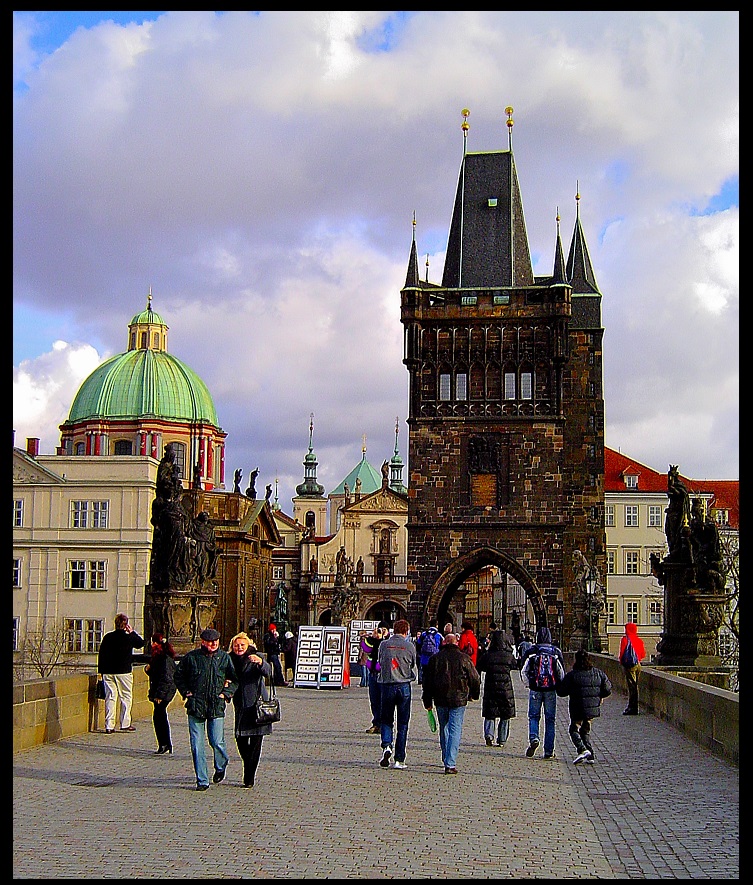 Gothic tower marking the Hradcany side of the Charles Bridge, built by Holy Roman Emperor Charles IV who reigned from 1346–1378. Photo: Henry Lewis

Crossing Prague’s Charles Bridge looking toward Hradcany. Prague Castle and the towers of St. Vitas Cathedral can be seen in the upper right of this view. Photo: Henry Lewis

The entrance to Prague Castle with the towers of St. Vitas Cathedral behind. Photo: Henry Lewis

The towers of the Baroque St. Nicolas Church in Hradcany. Photo: Henry Lewis

A wave of sensory processing swept over me as I gazed at the kaleidoscope of architectural styles, all seemingly incorporating a tower, turret or spire. Such is Prague’s dazzle factor that it could be described as Vienna’s show-off sister. While Vienna impresses by politely whispering in public, Prague screams ‘Gothic’, Baroque’ and ‘Art Nouveau’ from its highest hills.

Small painting I found at a street-side gallery near the Prague Castle. The artist’s interpretation of the city’s ornate rooftops really summed up my feelings. Photo: Henry Lewis

Prague’s UNESCO-designated Old Town (Stare Mesto), along with the neighboring districts of Hradcany, New Town (Nové Mesto) and Vinohrady, serve up more than enough architectural gems, museums and churches to satisfy the most jaded urban explorers.

Intricate detailing and meticulous craftsmanship are a hallmark of many of Prague’s residential buildings. Photo: Henry Lewis 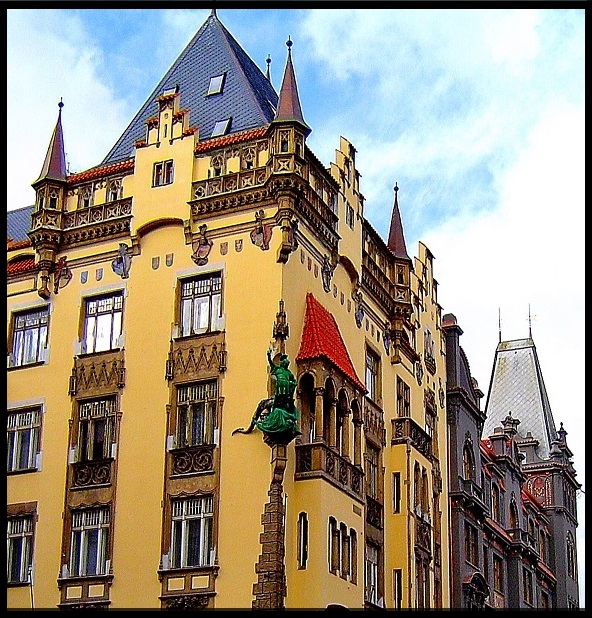 Could the interior of a residential building such as this possibly match the grandeur of its exterior? Amazing Prague! Photo: Henry Lewis

Synagogue in Prague’s Josefov district. Prior to German occupation during WWII, a full one quarter of Prague’s citizens were Jews. Photo: Henry Lewis

And take note as you stroll the city’s previously imperial streets. You might just run across a descendant of the Habsburg family! 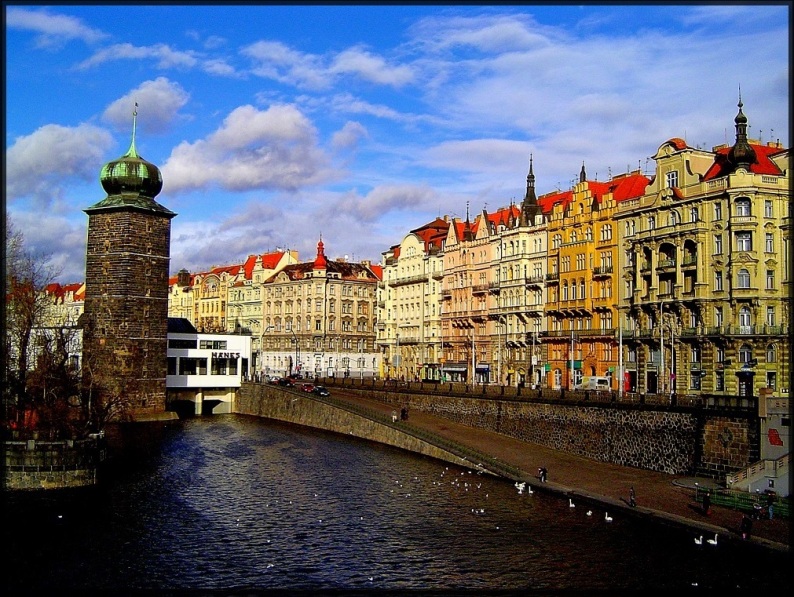 The Vltava River as it flows by Prague’s New Town. Photo: Henry Lewis 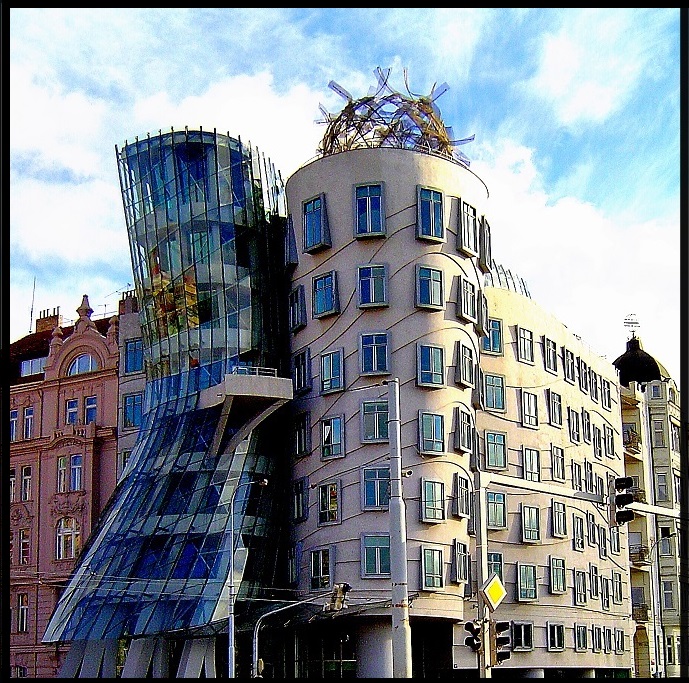 NOTE: My aim was to edit the photos so they appeared to have the rich tinted appearance of 1950s post cards. Apologies if the red roofs appear off-the-scale ‘RED’ on your device. Blame it on photo editing on my cheap Lenovo computer. 🙂