Mosaics of the Byzantine Empire

My journey to learn the secrets of mosaics began while I was working in Los Angeles in 1990. At the time, a contemporary revival of mosaic art was taking place in LA due to its creative vibe, great number of artists and the dry Mediterranean climate which is perfect for the preservation of outdoor mosaics.

I began creating my own mosaic works as I delved more deeply into the materials and techniques used in producing traditional mosaics, an art form that stretches back to ancient Greece and Rome. Like any poor artist, I collected materials wherever I could afford–asking inside retail tile stores and dumpster-diving near design centers. Having always had an affinity for the beauty, luster and durability of tile, I fell in love with this medium as a means of creative expression. 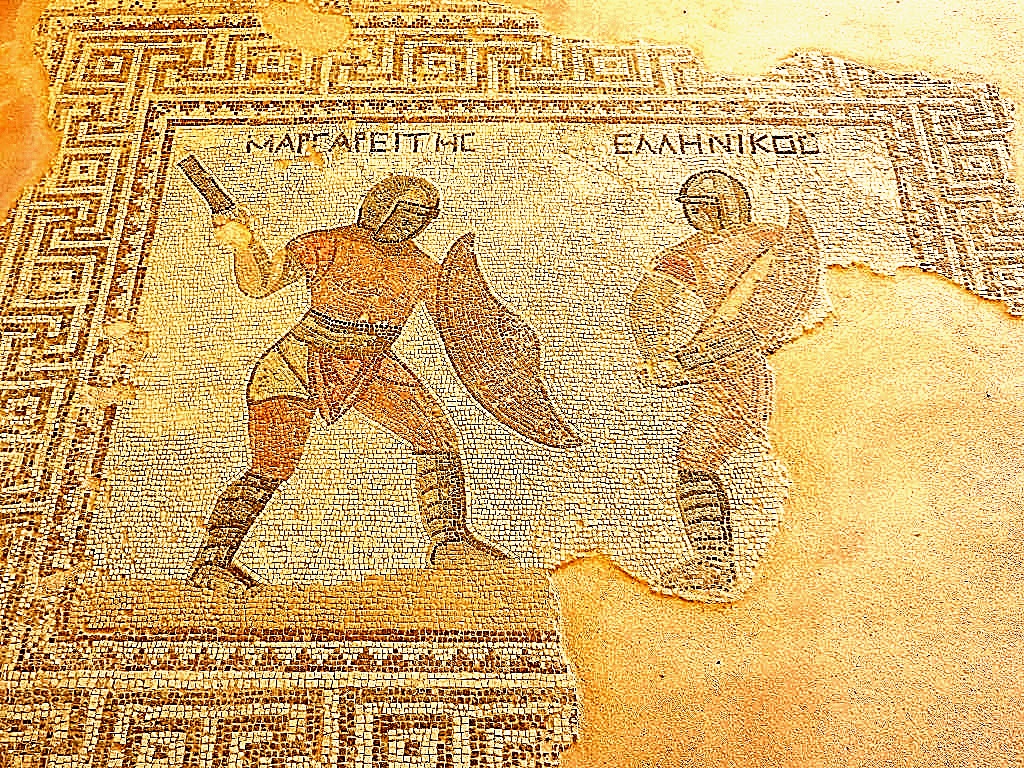 Byzantine mosaic artists built upon the mosaic traditions of ancient Greece and Rome. Two gladiators (c. 1st century CE) are depicted in this mosaic from the Roman archaeological site of Kourion on the island of Cyprus. Photo: Henry Lewis

At the same time, I set about planning a 1993 art and architecture tour around Europe. Along with two close friends, we gawked with delight at awe-inspiring art which ranged from Antoni Gaudí’s early 20th century mosaic fantasy of Güell Park in Barcelona, to the large, meticulously rendered mosaics inside St. Peter’s Basilica in Vatican City.

There was a particular work inside St. Peter’s that had fooled me–when viewed from a distance–into thinking the mosaic was actually a large-scale Renaissance painting. This became my first opportunity to closely observe the subtly outlined forms and astonishing number of tile colors used by the mosaic artists of that period. Since St. Peter’s is an Italian Renaissance church, mosaic art had advanced into a more naturalistic style with an amazing array of tile shades in each color group, shades of color that weren’t available to artists during the earlier Byzantine period. 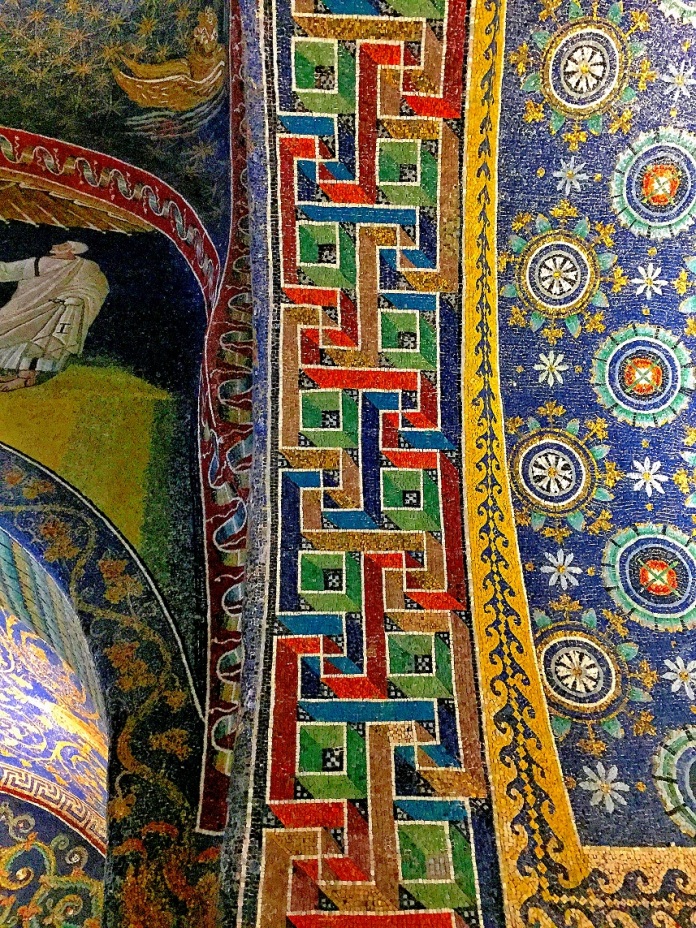 This colorful mosaic border found in the Arian Baptistry in Ravenna, Italy mimics the geometric patterns found in earlier Greek and Roman designs. Ravenna, which has a wealth of UNESCO-listed churches filled with dazzling mosaics, was the political center of the Western Byzantine Empire, also known as the Western Holy Roman Empire. Photo: Henry Lewis

While the Renaissance mosaics I saw that autumn in Rome were surely created at the artistic height of the art form, my fascination with Byzantine mosaics stems from their vast number and direct connection to the sprawling Empire that spawned them. 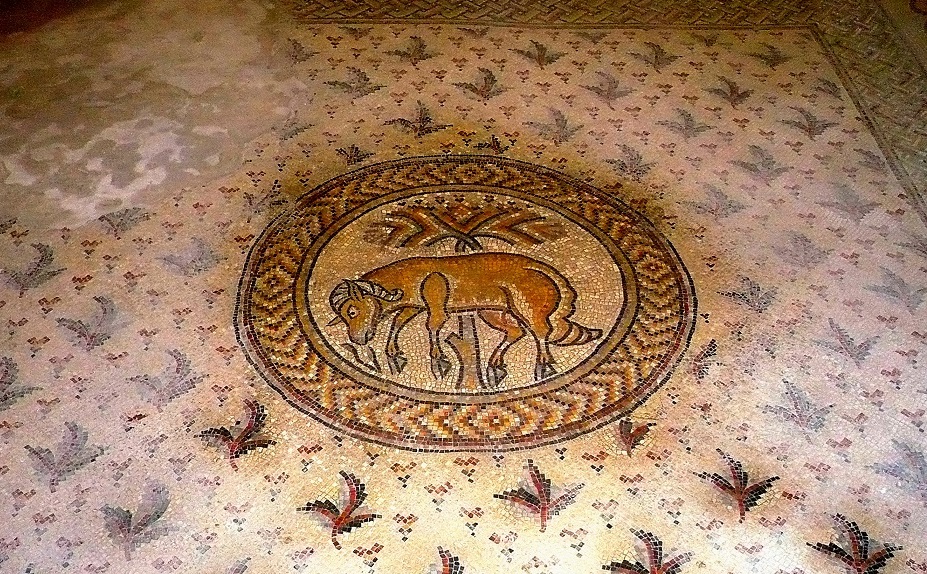 A bit of historical background

Based on archaeological finds, the earliest mosaic art was produced for temples in the Fertile Crescent region of Mesopotamia during the 3rd millennium BC. These early designs were created from available materials–shells from the coast, rounded or worked stones and pieces of bone or ivory. This was the traditional foundation of mosaic production that would be turned into a fine art by the Greeks and Romans almost three-thousand years later.

In 330 CE, after the Roman Emperor’s conversion to Christianity, Constantine moved the seat of power from Rome to Constantinople, which he established as a second Rome on the site of the ancient city of Byzantium (present-day Istanbul). At it’s peak, the Byzantine Empire stretched from Spain in the west to Palestine in the east, and was divided into the Western and Eastern Empires. Ravenna, Italy was made the Western Empire’s seat of power, while Constantinople was the Eastern seat of power and main capital of the Empire until it fell to the Ottoman Turks in 1453 CE.

Constantine and later Emperors–particularly Justinian, who expanded the Byzantine Empire to its greatest extent–used the Empire’s wealth to develop churches and pubic buildings that made liberal use of mosaics and frescoes which presented various Biblical stories as well as perpetuating Imperial power. The scale and beauty of Byzantine architecture is on full display in buildings such as the Hagia Sophia (Church of the Holy Wisdom) in Istanbul and the Basilica of San Vitale in Ravenna. 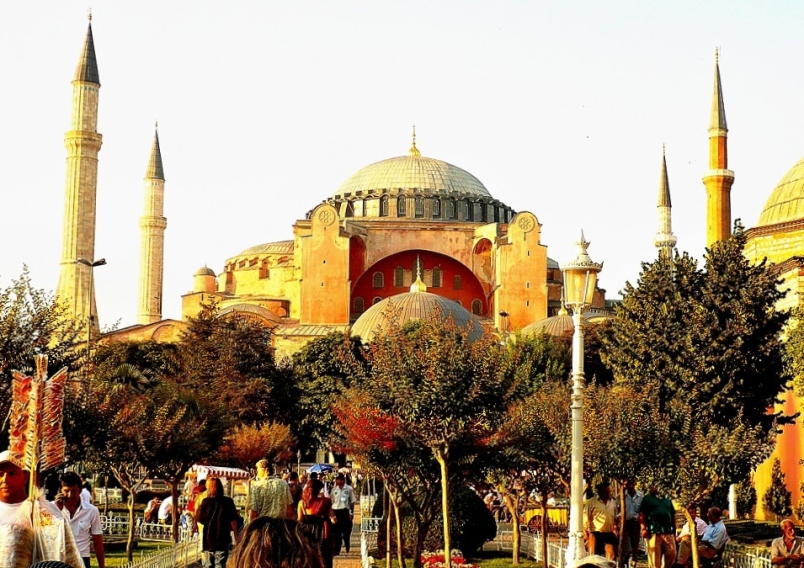 The Hagia Sophia or Church of Holy Wisdom , completed in the 5th century CE, was converted into an Ottoman mosque in 1453 and remained so until 1931. It went through yet another incarnation and was converted into a museum in 1935. It was the largest Christian church in the world until it was replaced by the current record-holder, the Seville Cathedral. Photo: Henry Lewis 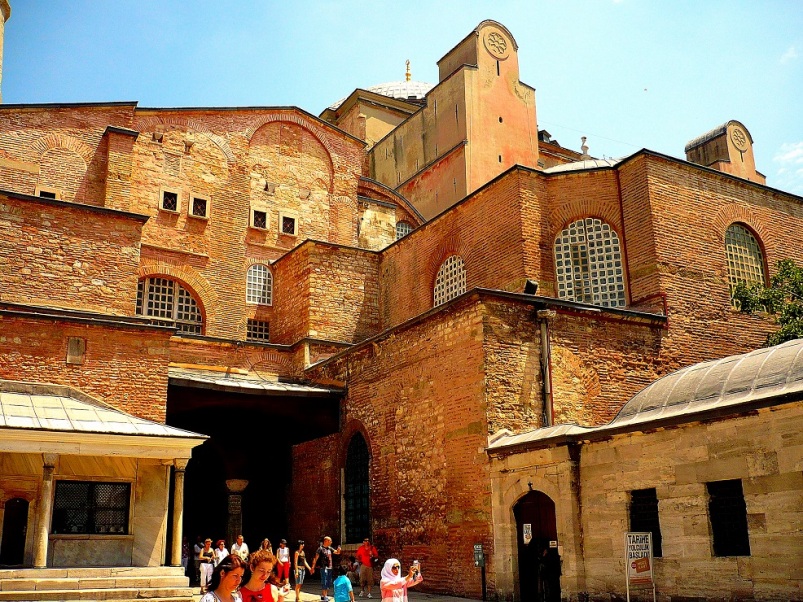 Layers of history, formed by the many renovations that have taken place over the centuries, are evident on the exterior facade of the Hagia Sophia. Photo: Henry Lewis 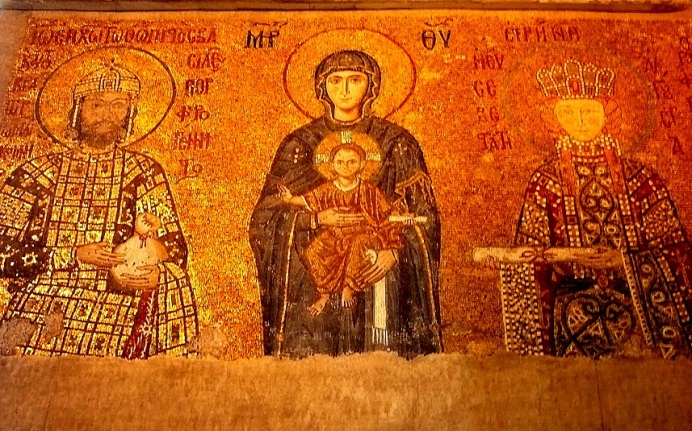 The Comnenus mosaic dates from the early 12th century CE and is found on a upper level of the Hagia Sophia. The mosaic depicts the Virgin Mary with the Child on her lap. Emperor John II Comnenus is on her right side and the Empress Saint Irene is to her left. The Emperor is holding a purse which signifies his financial generosity to the church while the Empress holds a scroll which signifies her contribution. Photo: Henry Lewis 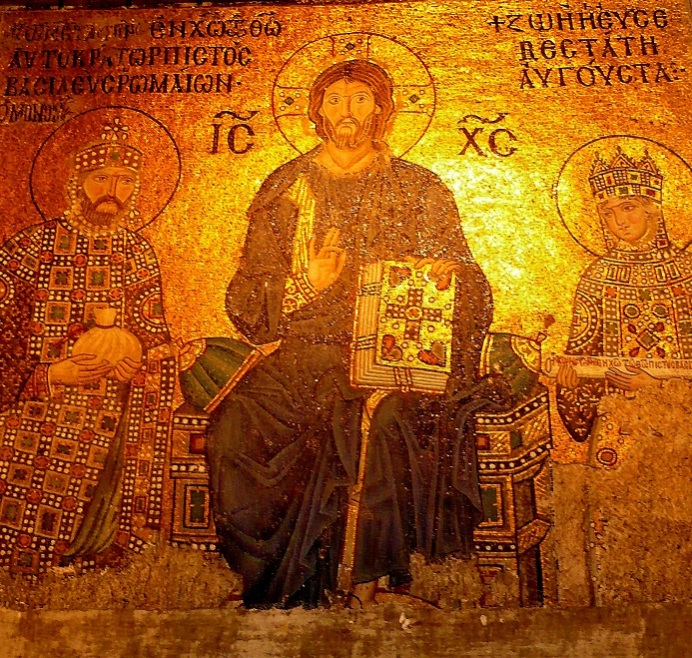 The Empress Zoe mosaic, found in the same area of the Hagia Sophia as the The Comnenus mosaic, dates from the 11th century CE. Christ sits in the center flanked by Emperor Constantine IX Monomachus on his right and Empress Zoe on the left. As in the Comnenus mosaic, the royals are depicted holding their symbolic gifts to the church. Photo: Henry Lewis

During the Byzantine period, mosaic patterns were created using individual pieces of stone or glass known as tesserae or smalti, the latter often produced in Venice, Italy. The entire interior–ceilings, walls and floors–of Byzantine churches was often covered in Biblical scenes and other motifs meticulously created with these stone and glass tiles.

These mosaic scenes contained many symbolic elements and often included figures representing the Emperor and Empress, thereby granting them ‘holy’ status as they vied for wall space with the likes of Jesus Christ and the Virgin Mary. 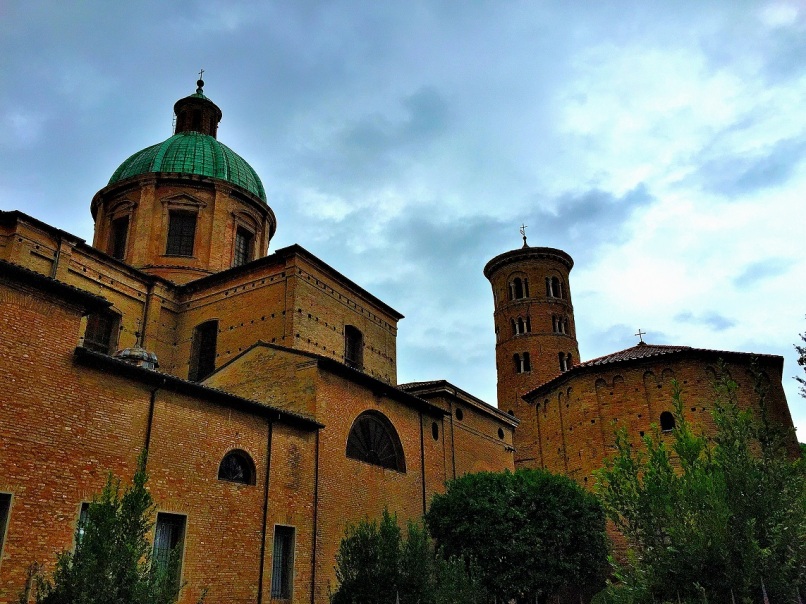 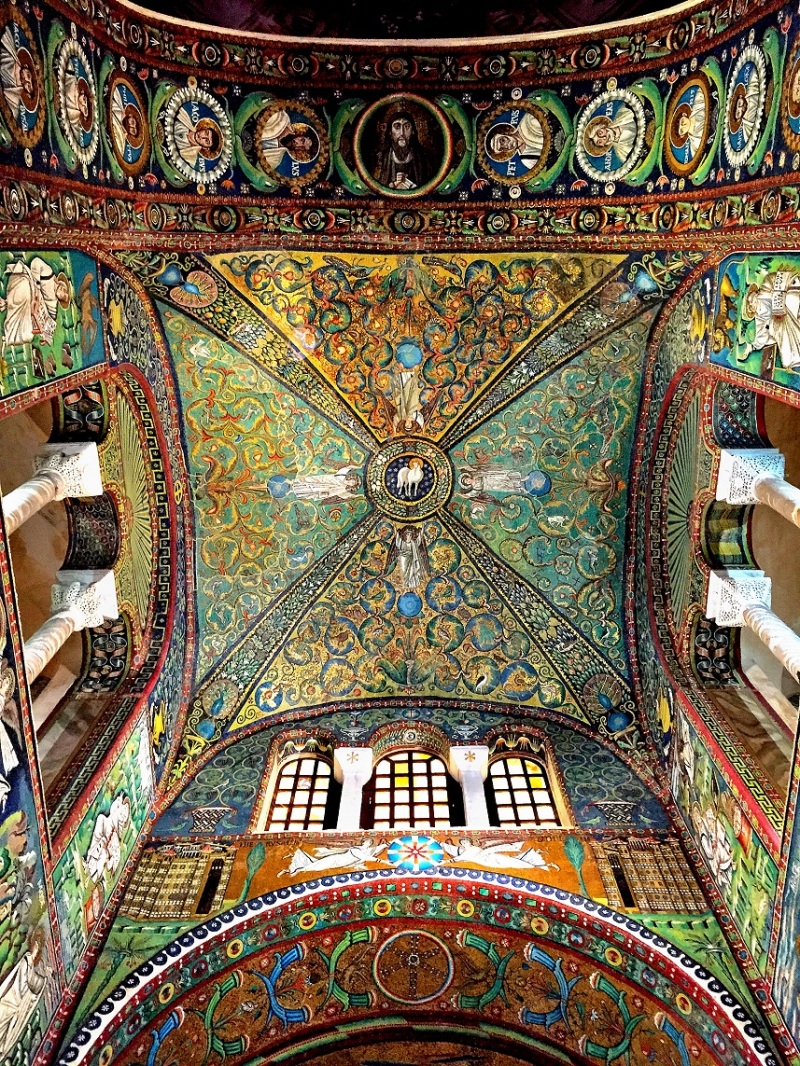 The interior of the Basilica of San Vitale in Ravenna is a riot of color and varying mosaic motifs. Remember that these ornate scenes were created by affixing one tiny tile at a time. Photo: Henry Lewis 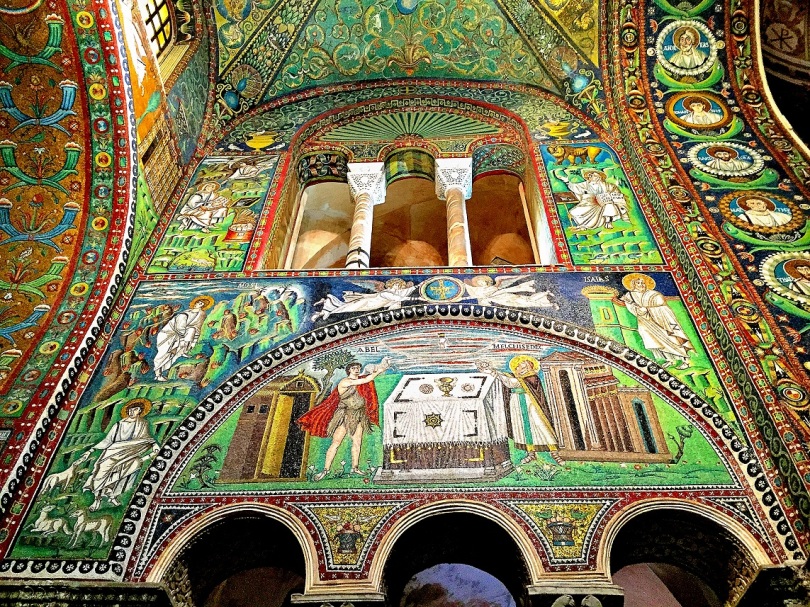 A series of mosaic Biblical scenes as depicted on the interior walls of the 6th century CE Basilica of San Vitale in Ravenna, Italy. Photo: Henry Lewis

Knowledge, skill and above all–patience

It feels overwhelming when I imagine the process involving months or years of labor in order to complete such great works of art. Producing such large-scale mosaics is an incredibly tedious endeavor and is physically demanding work as each tesserae or smalti is set in place one tiny piece at a time. While mosaic artists of this period would have undoubtedly had assistants, the dedication and patience involved is humbling to consider. 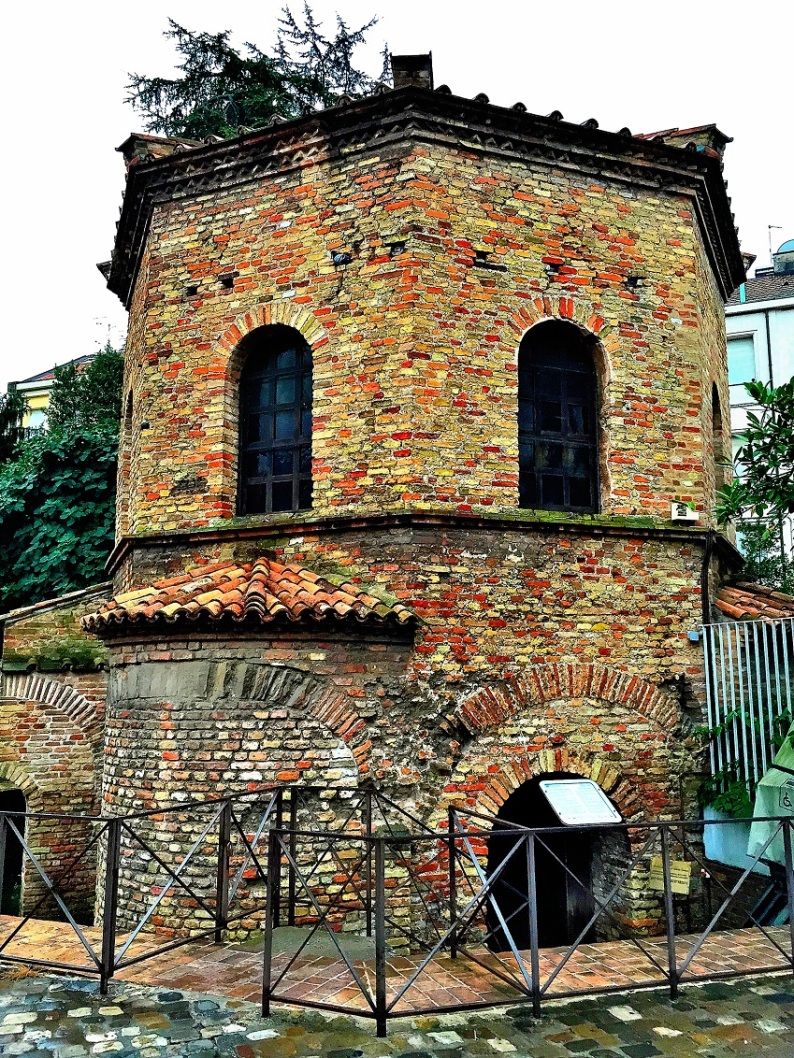 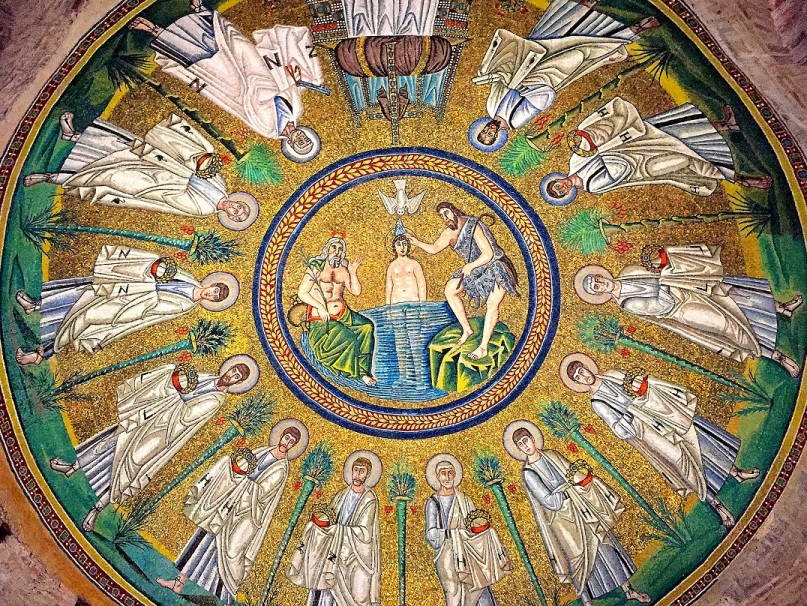 A mosaic of Christ being baptized by John the Baptist covers the interior dome of the Arian Baptistry in Ravenna, Italy. Photo: Henry Lewis

While those who are interested can find a critical mass of these dramatic works of art in cities such as Istanbul, Ravenna and Thessaloniki, Greece, Byzantine mosaics can also be found in many other regions that border the Mediterranean Sea. 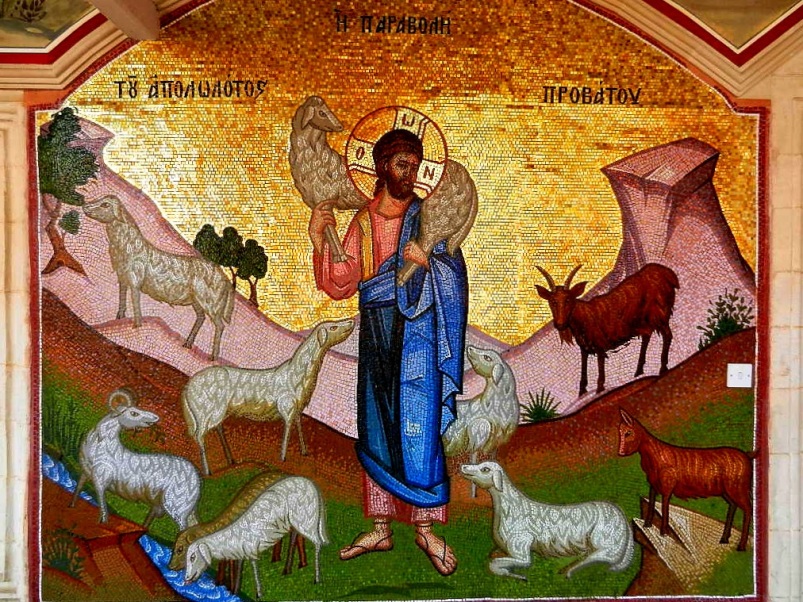 This contemporary mosaic, found at the Kykkos Monastery in Cyprus is based on a Byzantine design and theme. Photo: Henry Lewis

Due to the late 20th century resurgence in the popularity of mosaics–especially those made from pieces of randomly broken tile–art lovers today can view these works on walls, counters and tables in restaurants and other public places from coast to coast in the USA and in many other parts of the world. However, these contemporary mosaics have much more in common with Gaudí’s whimiscal Barcelona creations than with the highly structured styles adhered to in ancient Byzantine works of art.