More Arms in the Middle East

The civil war in Yemen began in 2015 and has been particularly deadly for innocents–men, women and children. It’s been made even more so due to the Saudi Arabia-led coalition’s use of remote-controlled weaponry, much of it produced in the USA which is one of the coalition partners.

On August 9th, a coalition airstrike killed at least 51, 40 of them children on a bus which was parked outside a market at the time of the strike. The deadly bomb used in the attack has been identified as a laser-guided MK-82 bomb made by Lockheed Martin, one of the largest US defense contractors.

Yemenis gather at the sight of the most recent bombing in the country’s northern Saada province on Sunday August 12th. Photo Credit: CNN

Not the first mistake

The explosive device responsible for the August 9th deaths was similar to one that the coalition fired on a funeral hall in Yemen in October 2016, killing 155 and wounding hundreds of others. At the time, the Saudis admitted it was a mistake and blamed “incorrect information”.

In addition, 97 people were killed by an American-made MK-84 precision-guided bomb in a Yemeni market in March 2016. According to Human Rights Watch, “Selling weapons to Saudi Arabia may make these countries complicit in violations,” as if remote control murder wasn’t a human rights violation!

The Obama administration cited human rights abuses for their late 2016 decision to end the sale of such precision-guided weapons to Saudi Arabia. Obama’s actions came after a great deal of pressure from both lawmakers and citizens alike who were concerned about the US role in such atrocities.

A portion of the US-made bomb used in the latest attack in northern Yemen which killed 51, of whom 40 were children. Photo Credit: CNN

In May 2017, US President Trump and Saudi King Salman bin Abdulaziz Al Saud signed an arms deal worth $109 billion, part of a broader $350 billion package of economic and defense investments Saudi committed to making with American defense contractors over the next decade. In the same month, the US government reauthorized the export of Paveway munitions to Saudi Arabia, ending Obama’s December 2016 ban.

It’s simply beyond understanding why the Trump administration would change this policy when there was clear evidence that the Saudi coalition was incapable of precisely targeting the ‘enemy’. Does Trump care more about undoing all of Barack Obama’s policies than he does about the lives of Yemeni children and other innocents half a world away? 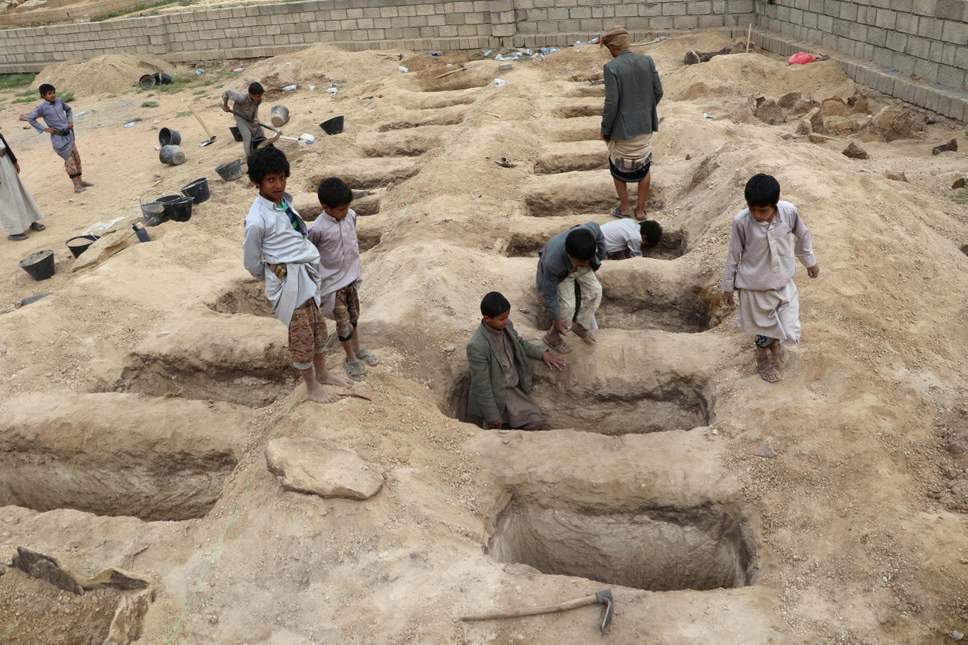 Saudi’s ruling family consistently commits human rights abuses against citizens who object to its policies. This campaign to silence critics had been heightened during the tenure of Saudi’s crown prince Muhammed bin Salman who has been called the most powerful leader in the Middle East, but who has also been widely criticized by the international community for human rights abuses both in Yemen and within his own country.

US and Saudi relationship

Over the past decades, the US Government has continually supported Saudi Arabia’s position and ignored the country’s wide-spread human rights abuses. In the most astonishing case, even though 15 of the 19 plane hijackers responsible for the 9/11 attacks on New York’s World Trade Center were from Saudi Arabia, the US reacted with aggression toward Afghanistan and Iraq, all the while assuring safe passage out of the country for Asama Bin Laden’s Saudi family. Why?

Strategic excuses may be used by some neo-conservative Washington bureaucrats such as Trump’s National Security Adviser, John Bolton, who helped build the case for a preemptive invasion of Iraq based on false information that Saddam Hussein was hiding weapons of mass destruction. I, however, see this as a case of corporate greed with the US Government being used as the broker of death.

According to the Stockholm International Peace Research Institute, Saudi Arabia is the world’s 4th largest spender on military weapons. Billions of dollars in US corporate profits and jobs for Americans seem to take priority over basic human values and the lives of innocents in the developing world, especially the Muslim world.

I was living in Oman, just north of Yemen, when that peace-loving Arabian Gulf country tried to work as a counter-balance to Saudi aggression in the Yemeni war. At the time, Yemen refugees were pouring across Oman’s southern border and there were constant reports of new atrocities being committed by the Saudi-led coalition against innocents living in remote areas where there was no media coverage.

Oman’s Sultan Qaboos and its foreign minister called on world powers to join it it in seeking a peace deal before the carnage became wide-spread. Sultan Qaboos surely had memories of the bloody civil conflict his own country had endured in the late 1960s. Instead of working with Oman as a partner for peace, the US Government instead chose the path of aggression and death in partnership with Saudi Arabia and the American, British and French defense corporations who supply the majority of the coalition’s military weapons and training.

Some will argue this is the cost of preventing Iran from spreading it’s reach to other countries in the region. Certainly, Iran has assisted the Houthi rebels in their fight against Yemen’s central government, but Iran’s involvement in Yemen is similar to the many instances in which the US government has aided specific groups who were fighting a civil war within their countries. Such aid to favored groups (often via the CIA) has been standard American foreign policy from Latin America in the 1970s to the more recent conflicts in Syria. The US Government’s strategy seems to be–choose a side and let the blood flow.

Would those who argue this point approve of Iranian-made weapons being used to bomb American shopping malls and funeral homes? Somehow I doubt it, which to me smacks of terminal hypocrisy. I find the idea that American (or other Western) lives are more important than those of people from the developing world abhorrent.

As an American, our country’s complicity in such destructive situations keeps me awake at night. A country that’s lost it’s moral compass—nothing says it like these events!