Labor in the Arabian Gulf-Part 1

Here, as in many of my posts, I’ll be walking along a precipitous slope while making cultural comparisons based on my personal experiences and research while living and working in different regions of the world where cultural norms and practices may contrast starkly. My aim is not to find fault or present one culture as being superior to another. As I’ve stated repeatedly in this blog, it’s my belief that all cultures hold valuable lessons for others to learn. These posts are simply meant to be a starting point for discussion on topics I feel are important, not an indictment of any specific people, religion or way of life.

Understanding that we’re all products of our own cultural upbringing and accumulated life experiences, I’ve admitted repeatedly that it’s challenging for me to maintain an objective cultural perspective, especially while living and actively participating in life within a given country and culture. I’ve found it’s much easier to see all sides of an issue once you’ve put a bit of distance between yourself and the major challenges of the moment. With all our shared human flaws, we’re more likely to achieve a balanced point of view by reflecting on experiences over a period of time.

So, with that in mind, I’d like to share some thoughts I had this week while visiting one of the huge building supply stores here in the USA. While searching aisle to aisle for just the right type of lumber, hardware and screws to complete a small project, I was reminded of the differing perspectives on physical labor and the concept of self-sufficiency that are evident from one culture to another.

Soon after my January 2008 arrival in the Sultanate of Oman (at the height of the oil boom) to teach at a government college, I traveled with co-workers to Dubai in the neighboring United Arab Emirates (UAE) for a weekend visit. As our car neared the coast, I could see what appeared to be an entire city of skyscrapers rising in unison out of a strip of desert along the shores of the Persian Gulf. Even though I’d witnessed large-scale construction projects during my time in China, I was absolutely gobsmacked by the surreal landscape that lay before us. “How can this be possible,” was my first thought, quickly followed by “how can this be sustainable?”

The following day I was equally shocked to see, for the first time, the legions of migrant laborers that gather in city centers all over the Gulf on Fridays, the day Muslims traditionally assemble in mosques for congregational prayer. Over the next few months, I would come to realize that the key to all this instant prosperity was the utilization and exploitation of low-cost labor, sourced principally from Pakistan, India, Bangladesh, Sri Lanka, Nepal and the Philippines.

Having inherited a ‘pull yourself up by your bootstraps’ work ethic from my parents and feeling the need to adapt to the customs of each particular living and working environment, accepting the expectation that someone else would take care of all duties involving manual labor—even during the roasting mid-day temperatures of summer–became the most challenging aspect of living in the Gulf for me.

While it’s important to note that all countries are guilty of labor exploitation to some extent, such practices are institutionalized within the economies of the Arabian Gulf. The kafala system, which allows both individuals and companies to sponsor foreign workers’ visas and to be totally responsible for their welfare with minimal government oversight, has often been blamed by migrant-rights groups for substandard housing and deplorable working conditions for many of these laborers.

For those who would like a more thorough introduction to migrant labor in the Gulf, please visit this site where you’ll find a variety of links. 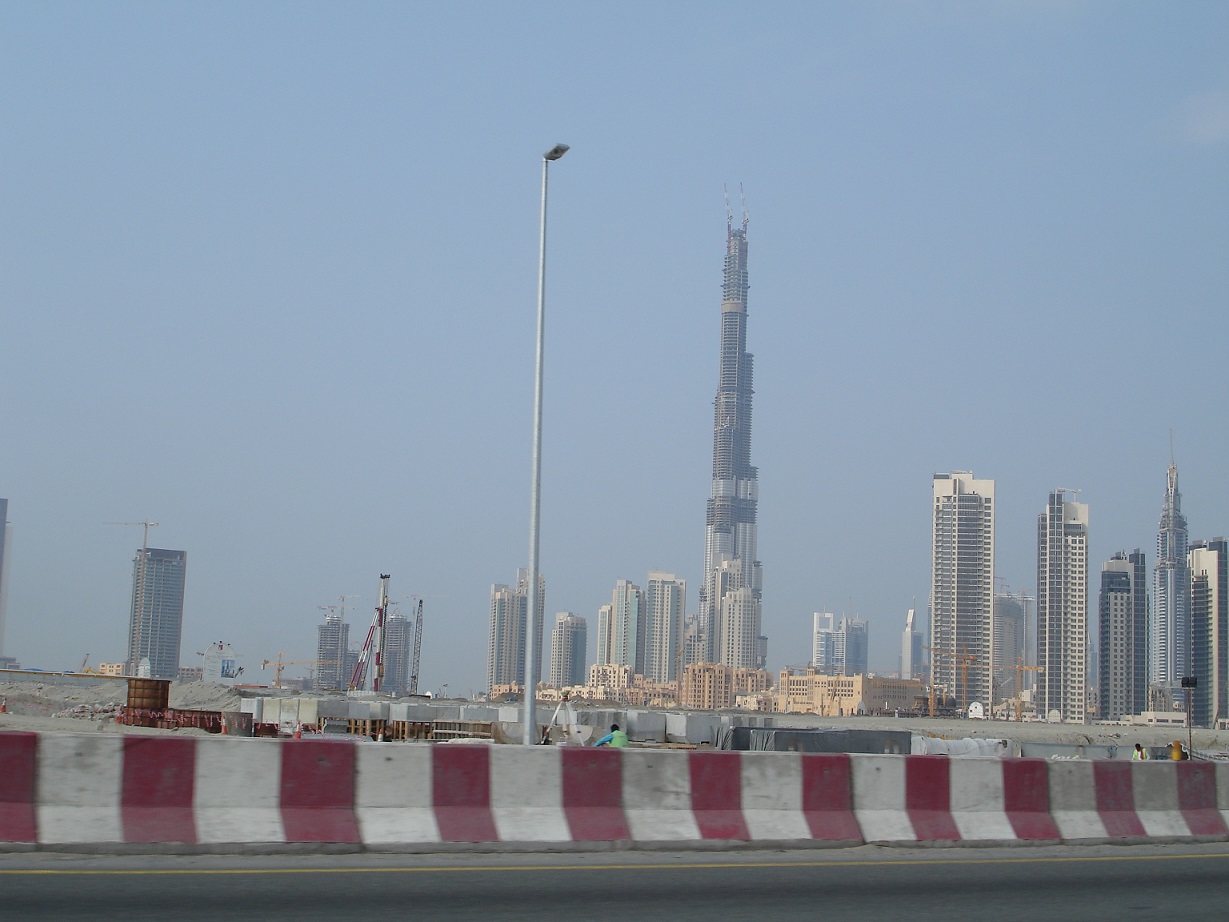 View of one portion of the rising Dubai skyline in January 2008. Note the construction dust in the air as the Burj Dubai (later renamed the Burj Khalifa), the world’s tallest building rises in the center of the photo.

The division of labor in the economies of the Gulf states, with the exception of the poor step-sister, the Republic of Yemen, was of particular interest to me and exists in much the same form from one Gulf state to another. There was a distinct hierarchy based on an individual’s level of training, educational attainment and interpersonal skills which dictated the allotment of visas for various labor categories.

From my experience in Oman, the highest percentage of unskilled laborers—the ones who worked on farms, on construction projects and in a variety of other menial, physically-demanding jobs—were most often citizens of India, Bangladesh, Nepal and Sri Lanka. It was no surprise that the unskilled group received much lower wages and endured what I perceived to be the harshest conditions. These were the workers I felt the most empathy for because their jobs required them to carry out strenuous outdoor tasks during the Gulf’s extreme summer temperatures.

This picture, more than any other I took, displays the rudimentary nature of the tools used by migrant laborers to perform a task in the Gulf. I watched as these 3 workers spent two days digging a tunnel for pipes under the street behind my house. They used a small metal pipe (seen in the hands of the worker at center-left) to push their way and slowly dig sideways until they had reached the other side of the street. In most other contexts, heavy machinery such as a backhoe would have been used to dig a trench on the surface. Using sheer human strength is a testament to the cheap cost of labor in this part of the Middle East.

In contrast, auto mechanics tended to be of Pakistani origin who usually lived in or near designated business zones (known as ‘Sanaya’ in Arabic) where their work was carried out. Somewhat controversially, I was once ‘informed’ by an Omani friend that the difference between an Indian laborer and a Pakistani one was that an Indian worker could be intimidated without fear of retribution, while a Pakistani wouldn’t hesitate to return aggression even if doing so might lead to deportation. During my eight years in Oman, I never felt the need to test his theory.

Due to the poorly designed and installed plumbing and electrical systems in all six of the apartments where I lived over those eight years, I had more than my share of dealings with plumbers and electricians. They were usually unlicensed and often untrained as well, which necessitated the need for frequent repairs—especially plumbing. I was fascinated to discover that plumbers were often natives of Pakistan while electricians were usually from India. I never discovered a clear reason for the stereotyping of these two trades other than the possibility that torquing the pipes might require more force and daring while manipulating electrical wiring involved finesse, technical skill, and perseverance (per my Omani friend’s opinion). Seriously, these were not hard and fast rules and there were exceptions, but this was my experience. I even used the services of an Omani plumber once, but I still believe this to be an aberration during the time I was a resident.

Workers from India and the Philippines were usually encountered in service industry positions since they were more likely to be fluent in the international business language of English. However, I witnessed a dramatic change during my years in the Gulf as more Omanis transitioned into retail jobs as cashiers since those positions were perceived as having white-collar status, although with lower salaries. In the nicer hotels, especially in upscale restaurants, both male and female waitstaff were likely to be of Philippine origin due to previous experience in the tourist industry as well as their country’s focus on developing a high level of English skill.

Omanis held the vast majority of government secondary school teaching positions, while university and college faculties (where the language of instruction was English) were normally comprised of professors and lecturers from the complete range of Middle Eastern countries, India, the Philippines and native English-speaking countries. Each term, more positions were also being added for Omanis in higher education as they returned from government-funded study abroad programs.

The vast majority of business executive and managerial positions were filled by educated Indians, as were technical and computer support jobs. It also must be said that many Omanis held token managerial positions in order to meet government quotas based on the country’s policy of ‘Omanization’. This was especially true in key sectors such as the petroleum industry.

Look for Part 2–“But Everything is SO Cheap”  tomorrow, Saturday April 27