I lived in the north central region of Oman for six of the eight years I worked as a university lecturer in the Sultanate. This region contains the vast majority of the country’s population, commerce and higher education institutions.

While more than 25% of Oman’s population lives in the Capital Area of Muscat alone, I worked and made my home in the Al Batinah Governorate’s administrative center of Sohar, a small industrial city on the coast about 2 hours northeast of Muscat and 2 1/2 hours southeast of the UAE’s popular destination of Dubai.

The cities in this region are Oman’s most prosperous and least traditional, although a drive into the countryside’s smaller villages quickly exposes the viewer to the Bedouin way of life where close family ties are far more prized than the glitzy excesses of city living. 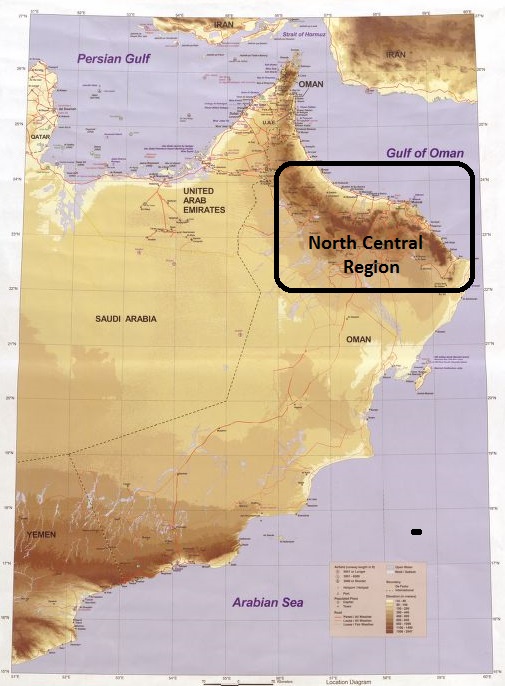 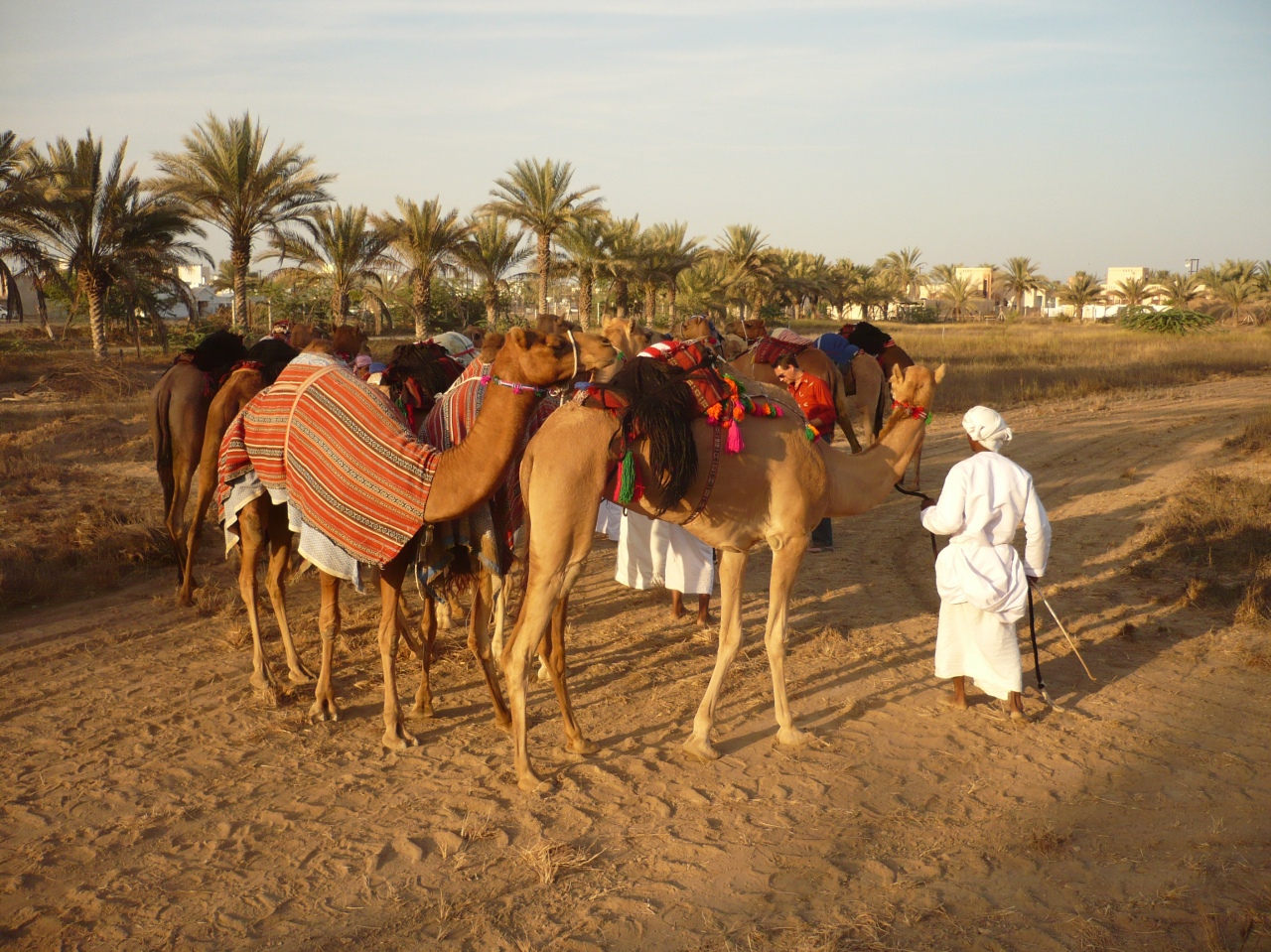 The stereotypical Arabian photo op everyone hopes for still presents itself occasionally. On this particular day, a group of Omani men, just outside Sohar in the Al Batinah Governorate, were enjoying showing off their prize camels. Omanis, and indeed most Gulf Arabs, share a great love for these curious beasts with their humped backs and incredibly long double sets of eye lashes. Besides being prized for their milk and unique ability to travel across vast deserts, camel meat used to be a staple of the local diet, but is now usually reserved for special feast times such as during one of the Eid holidays that follow the Holy Month of Ramadan. The ungulates are far too valuable these days as breeding stock and for camel racing, although camel meat has become a popular (and expensive) restaurant menu item abroad from London to Tokyo. There are even camel beauty contests where judges scrutinize each animal’s chest (a fuller chest is good for racing) and lower lip (the more it curves downward the more beautiful the animal is considered) before bestowing cash prizes on the winner. The Al Dhafra Festival, held each year in the desert outside the UAE capital of Abu Dhabi, claims to be the world’s largest camel beauty contest.

Watch a video of a camel beauty contest in southern Oman. 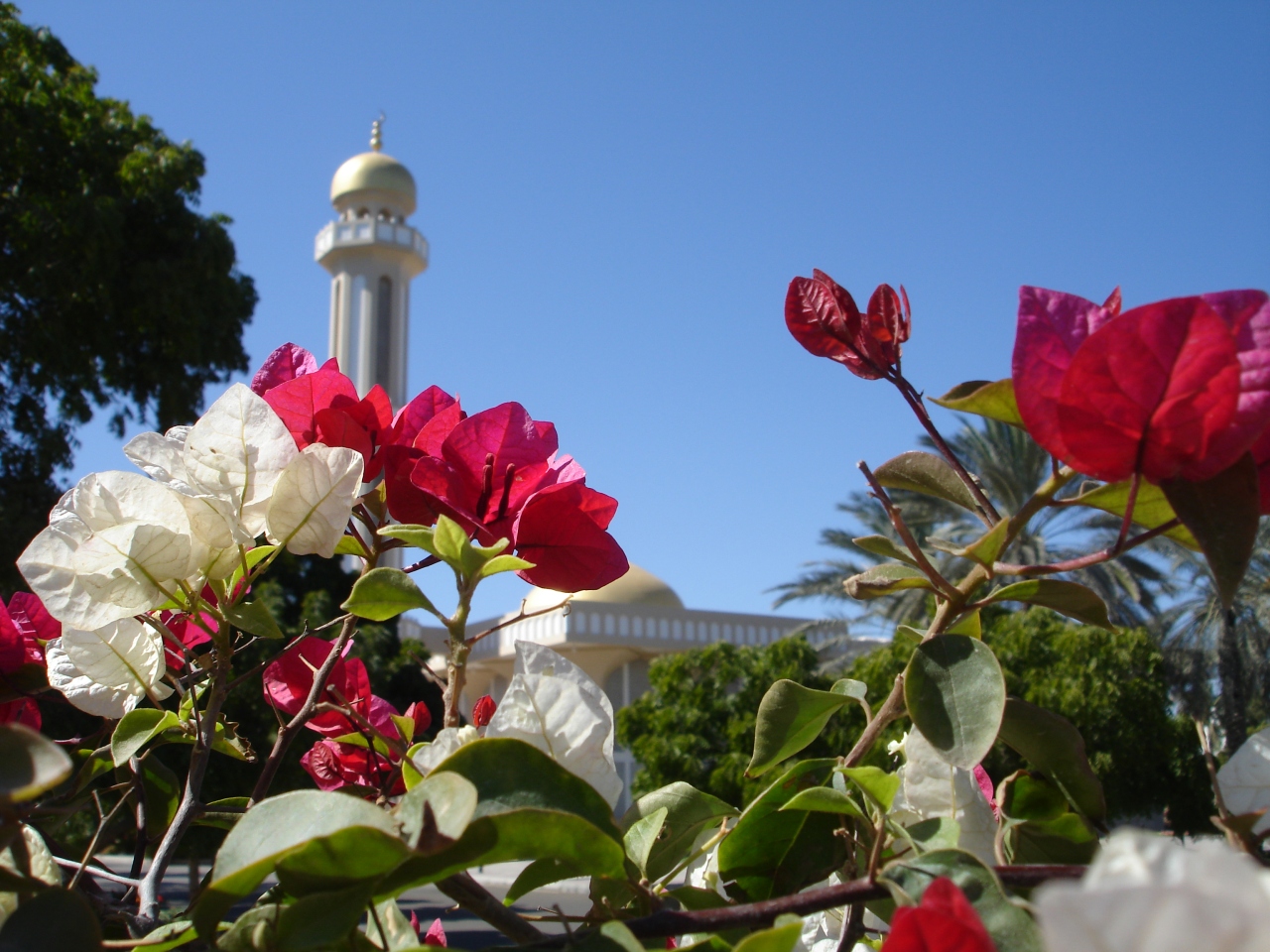 At times, I found life in this desert region lacking in color. The dominant tree species in most of Oman is the date palm with its crown of rigid brownish-green fronds, and though I eventually came to appreciate them for both their beauty and the shade they provided from an often relentless desert sun, I still longed for a more familiar kind of nature. However, just when I’d find myself longing for the greater variety and color of vegetation I’d experienced living in my former homes of North America and SE Asia, I’d spot a marvelous bougainvillea plant with its brilliant crimson (as well as a variety of other hues) blossoms spilling across a wall in front of a house or on the side of the road. While the variety of bougainvillea found so plentifully in this region requires very little water, the constant heat of the region allowed many of my expat friends to nurture surprisingly diverse and lush gardens by manipulating a bit of shade and watering regularly. Still, the desert sensibility of the Omanis was fascinating. I once lamented the fact that the campus gardeners would trim the hedges just as the blooms were beginning to peak, but was swiftly informed by one of my students that he preferred them that way since he’d become accustomed to a less visually distracting life in a desert environment. 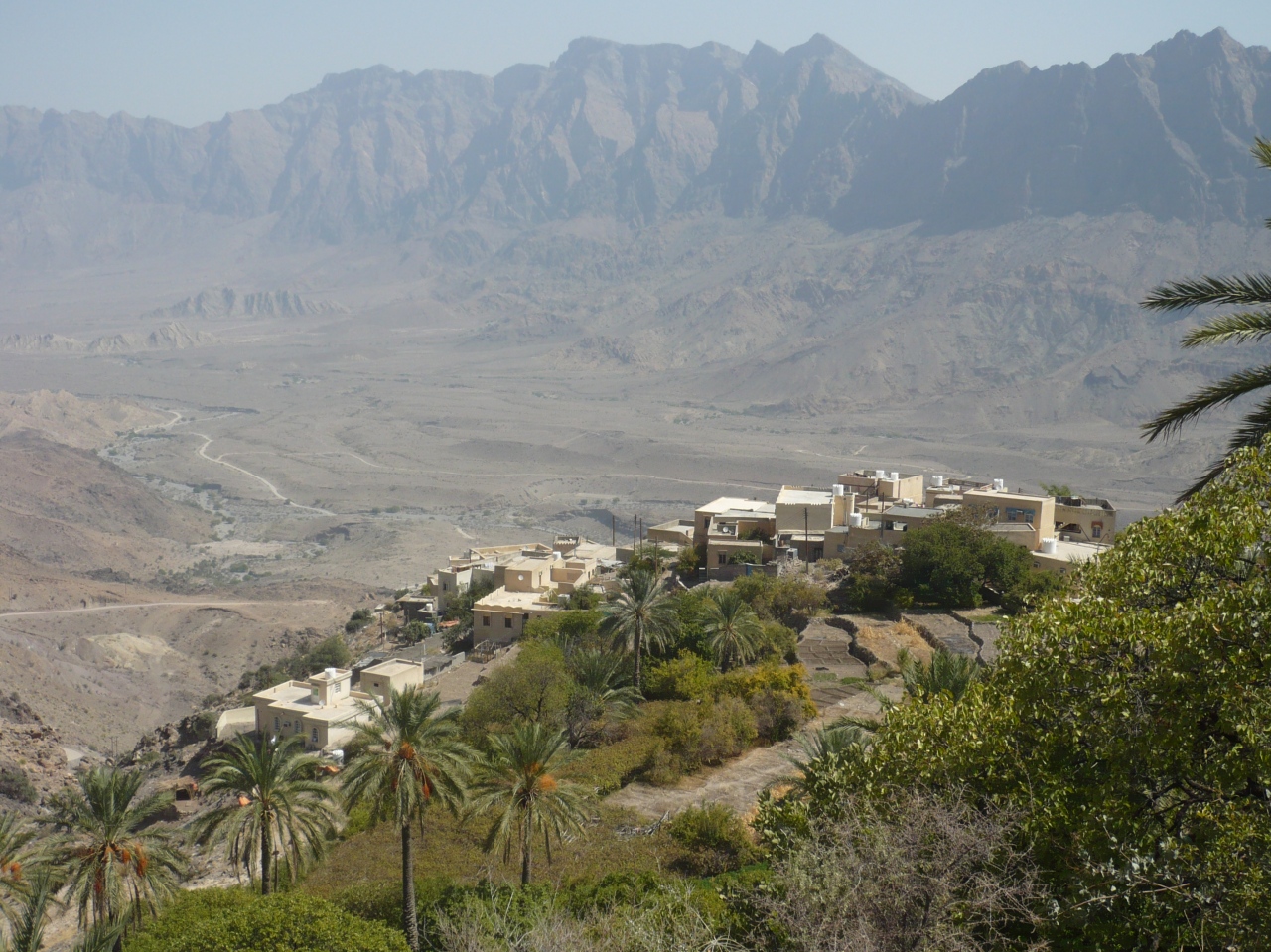 Oman is famous for its wadis (seasonally dry river beds), and these spectacular areas are prime spots for hiking and picnicking for both Omanis and expats. This photo shows the village of Wakan which sits high above the vast desert bowl created by the Al Hajar mountain range in the area known as Wadi Mistal. While many Omanis have moved to the cities for work opportunities, many quaint and remote villages have survived due to the Sultan’s insistence that all modern services be extended to these remote areas. It’s part of his desire to preserve the local culture, while at the same time creating intriguing places for tourists to visit. 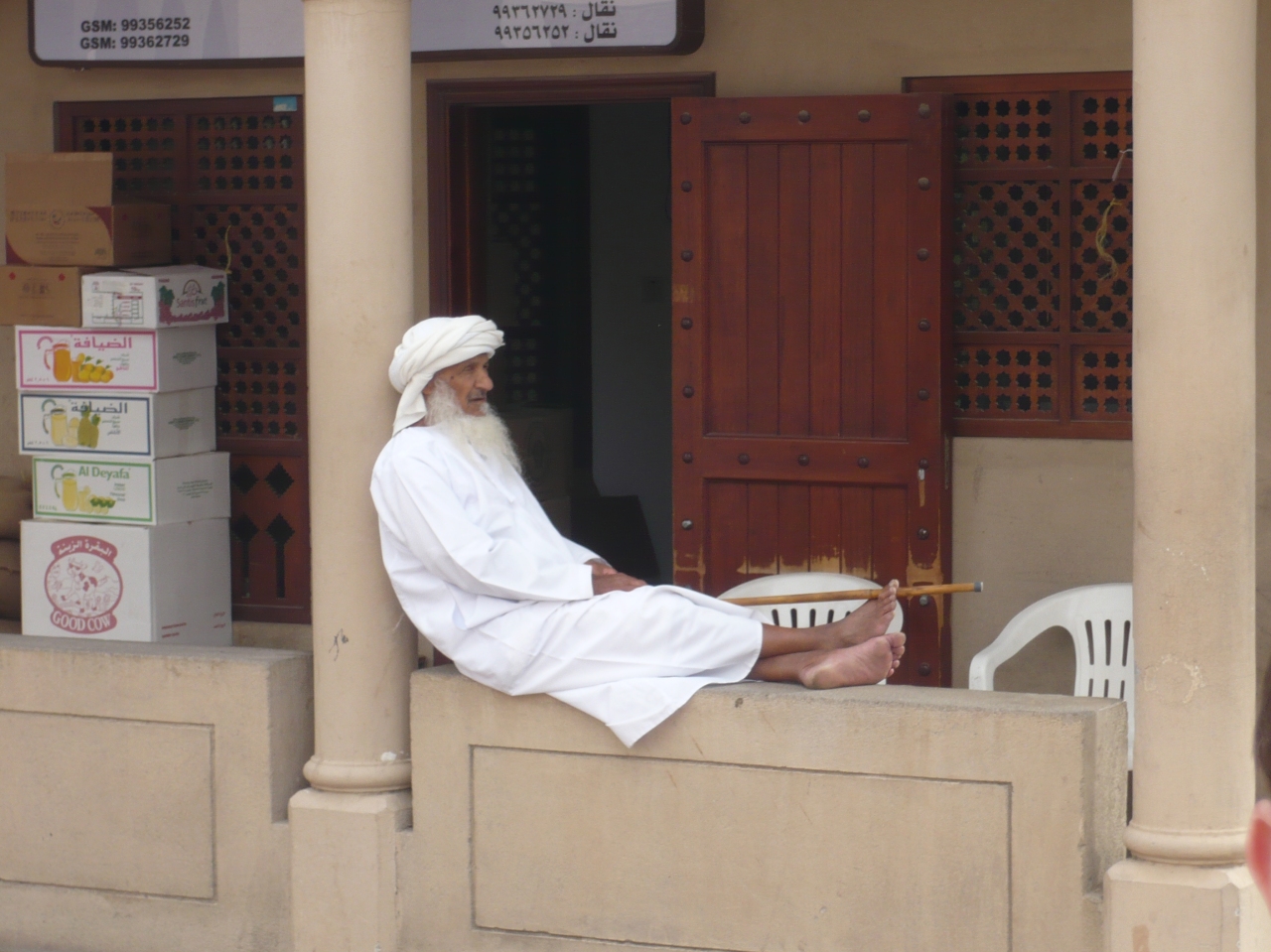 This elderly Omani man was enjoying his quiet time while sitting on a low wall in the Old Souk (traditional market) area of Nizwa, another popular tourist destination and former religious center about 2 hours west of the capital, Muscat. Omanis seemed to have a unique ability to simply relax and enjoy the moment. While most houses are surrounded by a wall for privacy, it was very common to see both men and women relaxing on the ground outside, often sitting on carpets. Even though I was often disappointed with the performance of many of my students in class, I must admit I did have a sense of admiration for their desire to avoid stress and not fear a lack of accomplishment. While this may seem antithetical to our Western work ethic (especially in the ‘must stay busy and be productive’ lifestyle of the USA), I’d be willing to wager there are fewer stress-related illnesses in this region of the world. To a great extent, I believe this lack of ‘drive for accomplishment’ is a product of the deep bonds within Omani families (where the desires of the family as a whole take precedent over those of an individual) as well as their firm trust in Islam to provide all the answers to life’s problems. While I believe extremes on either end of the spectrum have the potential to cause harm, I think Americans would benefit by not taking the pursuit of worldly success and the collection of material possessions quite so seriously.

Another of my favorite photos from Nizwa, this one taken at the famous Friday morning livestock market where people from the surrounding villages converge for this colorful gathering where they barter for goats, sheep and camels. The Bedouin woman pictured is wearing a head covering known in Oman as a ‘burqa’ which differs greatly from the one-piece body covering garment that goes by this same name in places such as Afghanistan. I would often see Bedouin women in the supermarket in Sohar wearing burqas that were made of a hard material resembling metal that only covered the area around their eyes, noses and upper lips. Most Omani women wear a head scarf known locally as a ‘shela’ (in other Middle East contexts often called a ‘hijab’) that covers their hair, but their faces are uncovered. In the southern areas of the country around Salalah, however, many local women do cover their faces with a black veil –known as a ‘niqab’–when in public.

Dotted around the landscape in every region of Oman, fortified watch towers hearken back to the days of regional tribal warfare when these defensive structures were used by sentinels to warn of approaching invaders and as vantage points for firing guns at the enemy. The national government has funded the restoration of many large historic forts located in towns all around the country as tourist attractions. Oman is seeking to preserve it’s culture and architectural treasures as national symbols of pride for its people and create interesting tourist attractions for international visitors.