At the time, Father Hodge was working tirelessly to rebuild his parish and its two small historic churches, located in isolated areas of Ashe and Allegheny counties in North Carolina’s Blue Ridge Mountains.

Long, who had recently returned from a multi-year apprenticeship with the noted Italian portrait and fresco painter, Pietro Annigoni, was in search of a church in his home state that would grant him permission to produce a fresco on an interior sanctuary wall.

As relationships are often built on mutual needs, the two men quickly struck a bargain. Despite the fact that Father Hodge had no money to pay Long for materials or labor, the artist was content with simply having his first fresco commission in his home state. Long created a fresco entitled Mary, Great with Child on a panel that would hang in Saint Mary’s Church at Beaver Creek. 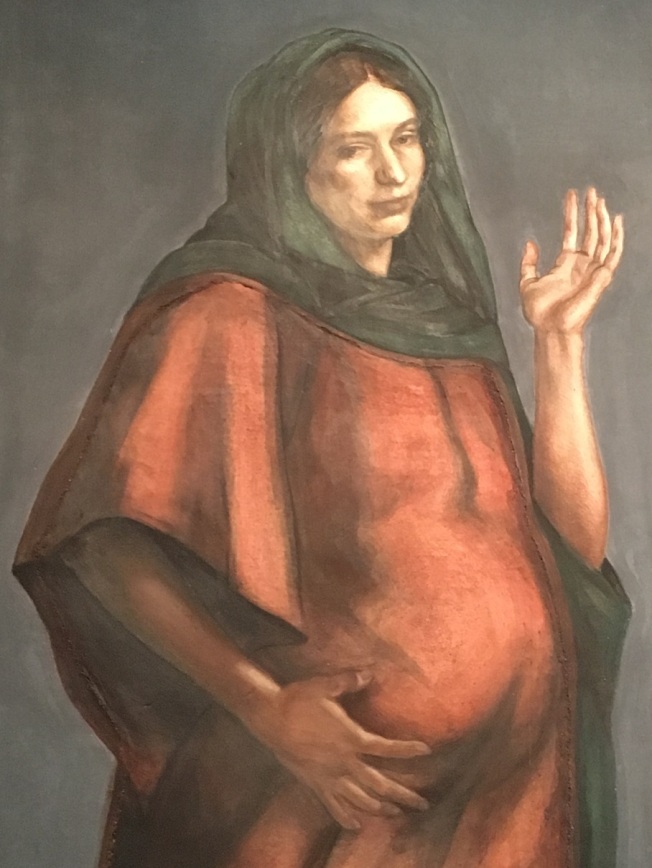 Detail of artist Ben Long’s Mary, Great with Child (1974), one of three frescoes which can be seen in St. Mary’s Episcopal Church, just outside West Jefferson, North Carolina. The artist presents a pregnant Mary in a very human style, rather than the often idealized form seen in many religious paintings. Photo: Henry Lewis

The work was well-received by parishioners, and soon Long added two more frescoes to the main sanctuary wall inside St. Mary’s that beautifully filled the space directly behind the alter. Local and international media followed, bringing Father Hodge more parishioners and artist Ben Long quite a degree of renown as a realist painter who was also skilled in the ancient art of fresco.

Long would go on to paint his interpretation of The Last Supper in Father Hodge’s second church, Holy Trinity, in Glendale Springs. By this time, word of the painter’s frescoes had spread to the extent that Long ended up with a team of twenty student-artists from around the USA and abroad to assist him.

Ben Long’s fresco of The Last Supper (1980) which covers the wall behind the altar in Holy Trinity Episcopal Church near Glendale Springs, North Carolina. Long was the model for Thomas, who is seen sitting on Jesus’ right side. Photo: Henry Lewis

Between 1974 and 1980, Long achieved notoriety by completing the first frescoes (four) in this region of the country, while Father Hodge became famous in his own right and grew his flock many fold from its humble beginnings. The serendipity of their meeting had been sweet indeed.

Fresco is an ancient medium in art. The first frescoes were created in Syria in the 18th century BC, but they are more closely associated with the ancient Greeks and Romans. The fresco artistic tradition saw an especially prolific period during the Italian Renaissance.

Some of the world’s greatest art treasures, such as Michael Angelo’s ceiling in the Vatican’s fabled Sistine Chapel, are frescoes. Due to advanced skills required in properly preparing the surface before painting, the vast majority of the world’s frescoes are found in Europe, particularly in Italy.

The fresco process is labor intensive (see below) and murals painted on a dry wall’s surface are far more common. For me personally, frescoes possess a magical quality due to the varied hues and softened lines that result from the drying process as the paint is pulled into the plaster wall itself.

While there are fine examples of fresco in significant buildings in the USA such as those painted by Italian artist Constantino Brumidi in the US Capitol Building in Washington, DC, it’s quite rare to run across such works of art in rural areas of the country. Rarer still is finding a large collection of frescoes in the USA that are all located within a 2-hour driving radius and that were conceived and executed by an American artist.

Fresco – from the Italian word ‘affresco’ (meaning fresh) – refers to the process of painting on plaster and the resulting product. The fresco process is a long and tedious one involving the application of three layers.

Step 1) a base coat of plaster – lime mixed with sand and water – is applied to the wall.

Step 2) a finer coat of plaster -The Arricio- a red outline called the Senopia is transferred from the studio drawings.

Step 3) the final Layer is the Intonaco -one part line and one part sand – to which hand-ground pigments suspended in water are applied.

The artist must apply the pigments before the plaster dries. The fresco must be painted in sections called Giornata, Italian for ‘the work that can be done in a day’.

Pause and then more frescoes

Long returned to Europe to work for the next decade, but migrated back to North Carolina in the early 1990s to create three frescoes for the lobby of the Bank of America Corporate Center in Charlotte, the head office of the USA’s second largest banking company. Remaining relevant to their corporate location, the titles of the triptych (three related works) panels are Making/Building, Chaos/Creativity and Planning/Knowledge. Each fresco panel measures 18 X 23 feet and it took Long and a team of nine assistants four months to complete the entire project. 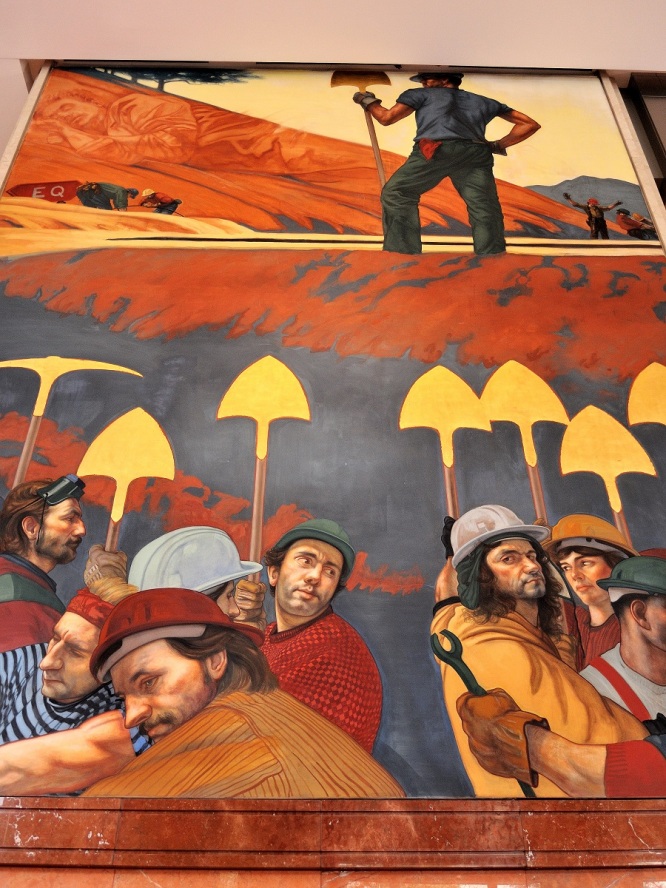 Making/Building is the first panel – on the left side of the lobby – of artist Ben Long’s triptych that can be seen at Bank of America Corporate Center in Charlotte, NC. The construction workers that feature in this panel appear to be holding symbolic two-dimensional shovels that could easily serve as spears. The workers wear resigned expressions as if their fate has been sealed. The ‘golden’ spades also might give a nod to Charlotte’s early gold-mining history. The human figure asleep ‘within’ the hill on the top left side of the panel is an interesting feature. Photo: Henry Lewis 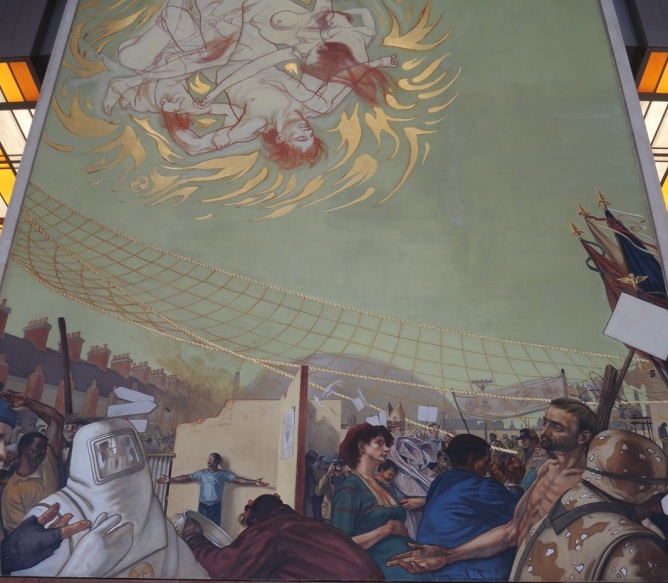 Chaos/Creativity is the center fresco panel of Ben Long’s triptych located in the main lobby of the Bank of America Corporate Center in Charlotte, NC. This interesting work shows a diverse crowd of people going about their activities while six nude figures swirl in the space above. A safety net separates the two groups . This panel is perhaps contrasting the honesty of nudity with the social masks we wear in our daily lives. Photo: Henry Lewis

Artist Ben Long’s third panel – located on the right side of the building’s lobby – at Charlotte’s Bank of America Corporate Center is titled Mind/Knowledge. The fresco presents a boy wearing an over-sized vintage coat (reminiscent of WWII Europe?) beside a group of four adult figures (with stern, yet questioning facial expressions), dressed in both contemporary and vintage clothing. Two of the adults are gesturing in the boy’s direction. The space above reveals a dancer suspended in mid-air and a man reading a book while sitting beside a burning tree. Dominating the background is a pyramid, often used to symbolize perfection. Photo: Henry Lewis

If you’re interested in further interpretation of the previous three fresco panels from the Bank of America Corporate Center in Charlotte, click here.

Between 1992 and 2006, painter Long completed nine additional frescoes in multiple towns and for a variety of secular and religious institutions in the western half of his home state. Along the way, many local people were used as models because the painter prefers to ‘paint from life’. 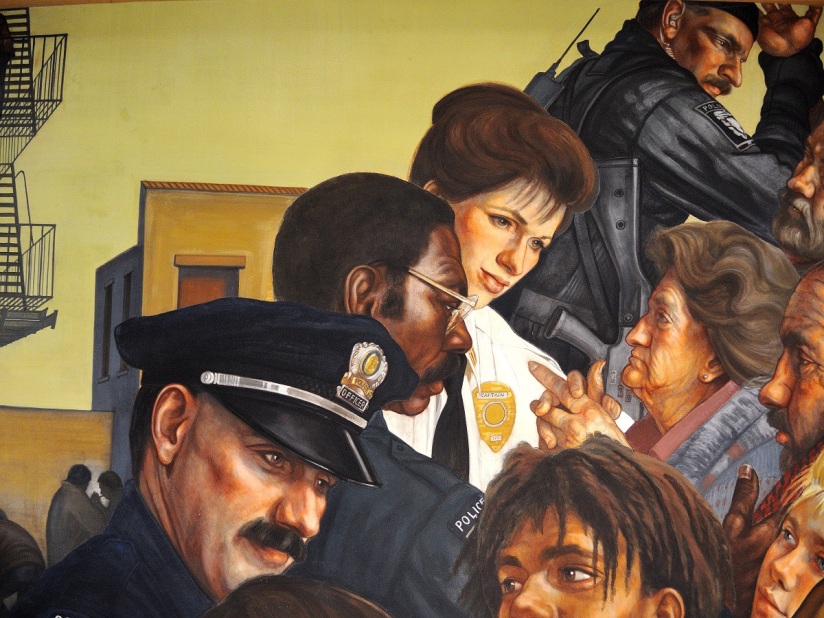 This is a detail (total size: 8 feet X 19 feet) from Untitled (1996), a  Ben Long fresco located in the main lobby of the Charlotte-Mecklenburg Law Enforcement Center in Charlotte, NC. Photo: Henry Lewis

Artist Ben Long’s fresco Return of the Prodigal (1998) illustrates the Biblical story of a young son who wandered far from home, squandered his inheritance and returns to his family destitute. Much to the young son’s surprise, his father celebrates his return. As the parable goes, the older brother (to the viewer’s far right) isn’t quite so pleased. I was intrigued by the featured placement of the three pigs in the viewer’s lower left corner since its generally prohibited for Jews to eat pork. However, according to the parable, the young son stooped so low as to resort to herding swine while he was away, so this element of the painting may symbolize his sense of desperation and fall from grace. The fresco can be seen inside the Montreat College Chapel in Montreat, NC. Photo: Henry Lewis

The Parable of the Good Samaritan (2001) is a fresco measuring 8 feet X 28 feet by artist Ben Long that can be seen in the entrance hall of the fellowship building at First Presbyterian Church in downtown Charlotte, NC. The placement of this scene in the city center is a symbol of the mission of this particular church to provide for the needs of those less fortunate. Photo: Henry Lewis

(Detail of) Images At The Crossroads (2002) is my personal favorite of Ben Long’s NC frescoes, both because of the diversity of the figures presented and because of the controversy it generated in the conservative small town where both Long and I were raised. The artist chose to represent the crossroads with the 3-faced Greek goddess Hecate, who has her right hand placed on her chest as a welcome symbol. However, some of the local evangelical preachers didn’t find her to be very friendly. In fact, Long was accused of promoting witchcraft since Hecate is also a goddess of magic. The fact that she is often represented as a woman with three heads probably didn’t help. Eventually, the controversy settled and Long moved on to his next project. Photo: Henry Lewis

St. Paul’s Episcopal Church in Wilkesboro, NC is the setting for artist Ben Long’s fresco St. Paul’s Conversion (2002) which is a much-painted theme in religious art. I like the artist’s use of dramatic chiaroscuro effect (contrast between light and dark) in this action scene. Photo: Henry Lewis

For the fresco Sacred Dance and The Muses (2004), artist Ben Long chose to paint the nine muses of Greek mythology who were believed to rule over and inspire art and other creative endeavors. This fresco (of which only a portion is shown here) covers the ceiling of the reception area at the Morganton Municipal Auditorium in Morganton, NC. Photo: Henry Lewis

Long’s frescoes at all eleven locations can be visited by car. Brochures are available along with online details and directions from Blue Ridge National Heritage Area. 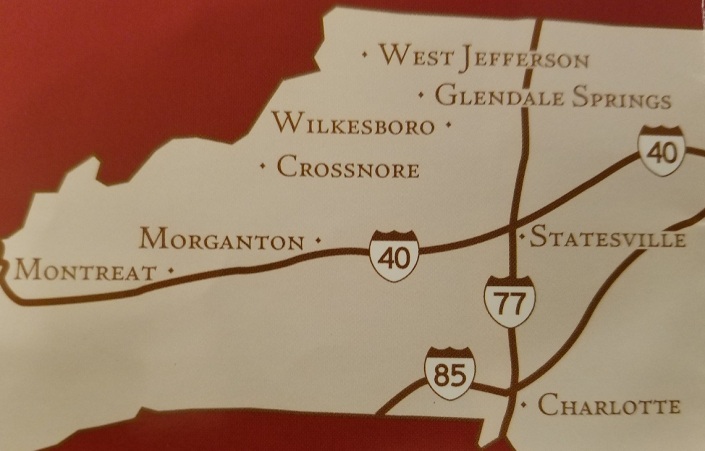 More information on Benjamin F. Long IV and his work can be found on the artist’s website below: